We carry authentic Portugal Flags in both indoor and outdoor varieties. Our flags are proudly made in the United States from durable nylon and are printed with vibrant long-lasting inks. The Portugal national flag is often displayed at embassies, outside of businesses associated with Portuguese, and at the homes of people who take great pride in their Portugal heritage.

Our indoor flags are finished with a pole hem and your choice of with or without golden fringe. Gold fringe is the traditional way to display an indoor flag, however, some people choose without fringe for a simple and clean look that is also less expensive. If you are looking for a complete indoor presentation set, our Build Your Own Indoor International Flag Set program allows you to select a durable nylon indoor Portugal Flag and choose between premium quality poles, bases, and ornaments, and tassel. For indoor applications, most buyers choose a 3ft. x 5ft. flag with an 8ft. pole, however, if you have a low ceiling, you may opt for a 7ft. pole, which is designed to work with drop ceilings. If you are looking for a very substantial international flag display, our 4ft. x 6ft. indoor flags can be paired with a 9ft. pole for our largest indoor display option.

Our outdoor international flags are finished with a canvas header and brass grommets and are offered in four sizes: 2ft. x 3ft., 3ft. x 5ft., 4ft. x 6ft., and 5ft. x 8ft., to fit any sized flagpole. Typically, outdoor flags are flown outside of government organizations, businesses, and institutions on in-ground and wall-mount flagpoles, however, some people also buy these flags to display their international pride at home. If you are looking for a wall-mount Portugal flag set to display outside of your home, our Build Your Own Outdoor International Flag Set program will allow you to choose between premium quality 6ft. poles and brackets to display the Portugal Flag on your front porch. Outdoor flags can also be displayed indoors on interior walls of your home with screws anchored in the wall to attach to the grommets. 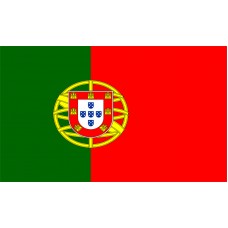 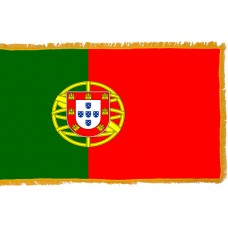 History of the Portugal Flag

The Portugal Flag consists of two vertical bands in the colors of green and red. The two bands are not equally divided and the green band on the left hand side of the flag is smaller than the red band. In the middle of the color boundary, there is a lesser version of Portugal’s national coat of arms. The green color represents the hope the country has for the future and the red color represents the blood that was shed during the battle that caused the death of numerous Patriots and abolished the monarchy.

The national coat of arms features a red shield that is surrounded by yellow straps and it has seven small yellow castles in it. In the center of the red shield is a white shield that contains five small blue shields inside it, which all have white dots in them. The small blue shields represent the five Morisco Kings (or five Moorish Kings) that Don Afonso Henriques (the first King of Portugal) defeated in the "Ourique Battle."

The white shield was Don Afonso Henriques armor, and, according to legend, whilst he was in battle, Christ came before him and said, "with this sign (the white shield), you will conquer!" The seven castles that are in the red shield represent the seven castles that Don Afonso Henriques had to conquer for his victory. The Portugal flag was adopted on June 30th, 1911, following the abolishment of the monarchy.

The Portugal flag used to be in the colors of blue and white and it was suggested that the colors were changed to red and green to signify the change of control and the new state. It was also suggested that red should "be present as one of the main colors, because it is the battling, warm, virile, color par excellence. It is the color of conquest and laughter. A singing, burning, joyful color…Recalls the idea of blood and urges to achieve victory."

The Portuguese Empire is one of the longest empires in Modern Europe. During the 15th and 16th centuries, many Portuguese explorers sailed across the world, and, on their way, they made very important discoveries (they discovered Brazil), claimed many islands, invented new trade routes and they were the first country to embark in the transatlantic slave trade by bringing slaves over from West Africa.

The Portuguese Hymn (A Portuguesa)

Heroes of the sea, noble people,
Brave, immortal nation,
Raise today once more
Portugal's splendor!
Amidst the mists of memory,
O Fatherland, the voice is heard
Of your egregious forefathers,
That shall lead you to victory!

Hoist the undefeated Flag,
In the lively light of your sky!
May Europe cry out to the whole Earth:
Portugal has not perished
Your merry ground
The Ocean kisses, roaring with love,
And your victorious arm
Gave new worlds to the World!

Salute the Sun that rises
Over a gleeful future;
Let the echo of an offense
Be the sign for a comeback.
Rays of this strong dawn
Are like a mother's kisses,
That keep us, sustain us,
Against the injuries of fate.

We offer free images of the Portugal Flag in four sizes (small, medium, large, and high resolution). These images are distributed royalty free for both personal and educational use and are ideal for use in projects and on websites. If you choose to use one of our images, attribution is appreciated, but not required.

The following html code snippets can be copied and pasted to add an image of the Portugal Flag to your website: