We carry authentic Rwanda Flags in both indoor and outdoor varieties. Our flags are proudly made in the United States from durable nylon and are printed with vibrant long-lasting inks. The Rwanda national flag is often displayed at embassies, outside of businesses associated with Rwanda, and at the homes of people who take great pride in their Rwandan heritage.

Our indoor flags are finished with a pole hem and your choice of with or without golden fringe. Gold fringe is the traditional way to display an indoor flag, however, some people choose without fringe for a simple and clean look that is also less expensive. If you are looking for a complete indoor presentation set, our Build Your Own Indoor International Flag Set program allows you to select a durable nylon indoor Rwanda Flag and choose between premium quality poles, bases, and ornaments, and tassel. For indoor applications, most buyers choose a 3ft. x 5ft. flag with an 8ft. pole, however, if you have a low ceiling, you may opt for a 7ft. pole, which is designed to work with drop ceilings. If you are looking for a very substantial international flag display, our 4ft. x 6ft. indoor flags can be paired with a 9ft. pole for our largest indoor display option.

Our outdoor international flags are finished with a canvas header and brass grommets and are offered in four sizes: 2ft. x 3ft., 3ft. x 5ft., 4ft. x 6ft., and 5ft. x 8ft., to fit any sized flagpole. Typically, outdoor flags are flown outside of government organizations, businesses, and institutions on in-ground and wall-mount flagpoles, however, some people also buy these flags to display their international pride at home. If you are looking for a wall-mount Rwanda flag set to display outside of your home, our Build Your Own Outdoor International Flag Set program will allow you to choose between premium quality 6ft. poles and brackets to display the Rwanda Flag on your front porch. Outdoor flags can also be displayed indoors on interior walls of your home with screws anchored in the wall to attach to the grommets.

In addition to the flags we offer for purchase, we maintain an archive of the audio and lyrics of the Rwanda National Anthem, historical information about the Rwanda flag, demographic data about Rwanda, and free high resolution images of the Rwanda flag for use in projects and on websites. 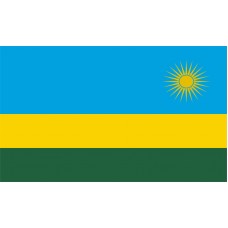 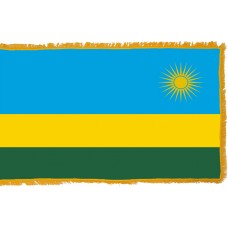 History of the Rwanda Flag

The Rwanda Flag features 3 horizontal bands in the colors of blue, yellow, and green. In the top right-hand corner, is a yellow sun. The blue color represents happiness and peace, the yellow color represents the economic development of the country, and the green color represents hope and prosperity. The sun represents a new beginning and enlightenment.

The flag is supposed to represent the now unity of the country, respect, and heroism. The Rwanda flag was designed by a local artist named Alphonse Kirimobenecyo. Before the present flag, the flag that was used was a red, yellow, and green (the Pan-African colors) tricolor flag which had a large black letter "R" in the middle of it. The letter "R" represented Rwanda, Revolution, and Referendum. The Rwanda flag was changed, though, due to the 1994 Genocide.

Rwanda (which is also known as the "Land of the Hills" due to the majority of the country being covered with grassy hills) is a landlocked country in Eastern Africa that shares borders with Uganda, Tanzania, Burundi, and the Democratic Republic of Congo. The capital of Rwanda is called Kigali. Rwanda is one of the smallest countries in the world. In 1890, Rwanda became part of German East Africa along with Burundi but during WWI, both Rwanda and Burundi, were captured by the Belgian forces. Following its capture by the Belgians, the country became very divided and the tension due to its capture led to the 1994 Genocide.

Due to this Belgium would offer better opportunities (i.e. Jobs, education etc.) to the Hutus than to the Tutsis. In 1959, the Rwandan Revolution (also known as the "Social Revolution" or "Wind of Destruction") began, in November, between the Hutus and the Tutsis.

It began when a series of attacks began on the Tutsis and their homes. A Belgian colonel was brought into this revolution and began to protect the Hutu and replaced many Tutsi chiefs with Hutu. In 1960, when the Hutus had gained control of the majority of the country, an election was held for independence and in 1962, Rwanda was officially declared independent.

Even though Rwanda was officially independent, this did not stop the tension between the Hutus and Tutsis and on April 7th, 1994, the 100 day Genocide began with the mass slaughter of the Tutsis lead by the Hutus. Approximately 500,000 – 1,000, 000 (70% of the Tutsi population) lost their lives.

Rwanda, our beautiful and dear country
Adorned of hills, lakes and volcanoes
Motherland, would be always filled of happiness
Us all your children: Abanyarwanda
Let us sing your glare and proclaim your high facts
You, maternal bosom of us all
Would be admired forever, prosperous and cover of praises.

Invaluable heritage, that God protects to you
You filled us priceless goods
Our common culture identifies us
Our single language unifies us
That our intelligence, our conscience and our forces
Fill you with varied riches
For an unceasingly renewed development.

Our valorous ancestors
Gave themselves bodies and souls
As far as making you a big nation
You overcame the colonial-imperialistic yoke
That has devastated Africa entirely
And has your joy of your sovereign independence
Acquired that constantly we will defend.

Maintain this cape, beloved Rwanda,
Standing, we commit for you
So that peace reigns countrywide
That you are free of all hindrance
That your determination hires progress
That you have excellent relations with all countries
And that finally your pride is worth your esteem.

We offer free images of the Rwanda Flag in four sizes (small, medium, large, and high resolution). These images are distributed royalty free for both personal and educational use and are ideal for use in projects and on websites. If you choose to use one of our images, attribution is appreciated, but not required.

The following html code snippets can be copied and pasted to add an image of the Rwanda Flag to your website: