We carry authentic Bermuda Flags in both indoor and outdoor varieties. Our flags are proudly made in the United States from durable nylon and are printed with vibrant long-lasting inks. The Bermuda national flag is often displayed at embassies, outside of businesses associated with Bermuda, and at the homes of people who take great pride in their Bermuda heritage.

Our indoor flags are finished with a pole hem and your choice of with or without golden fringe. Gold fringe is the traditional way to display an indoor flag, however, some people choose without fringe for a simple and clean look that is also less expensive. If you are looking for a complete indoor presentation set, our Build Your Own Indoor International Flag Set program allows you to select a durable nylon indoor Bermuda Flag and choose between premium quality poles, bases, and ornaments, and tassel. For indoor applications, most buyers choose a 3ft. x 5ft. flag with an 8ft. pole, however, if you have a low ceiling, you may opt for a 7ft. pole, which is designed to work with drop ceilings. If you are looking for a very substantial international flag display, our 4ft. x 6ft. indoor flags can be paired with a 9ft. pole for our largest indoor display option.

Our outdoor international flags are finished with a canvas header and brass grommets and are offered in four sizes: 2ft. x 3ft., 3ft. x 5ft., 4ft. x 6ft., and 5ft. x 8ft., to fit any sized flagpole. Typically, outdoor flags are flown outside of government organizations, businesses, and institutions on in-ground and wall-mount flagpoles, however, some people also buy these flags to display their international pride at home. If you are looking for a wall-mount Bermuda flag set to display outside of your home, our Build Your Own Outdoor International Flag Set program will allow you to choose between premium quality 6ft. poles and brackets to display the Bermuda Flag on your front porch. Outdoor flags can also be displayed indoors on interior walls of your home with screws anchored in the wall to attach to the grommets.

In addition to the flags we offer for purchase, we maintain an archive of historical information about the Bermuda flag, demographic data about Bermuda, and free high resolution images of the Bermuda flag for use in projects and on websites. 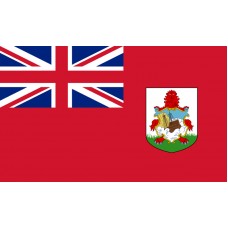 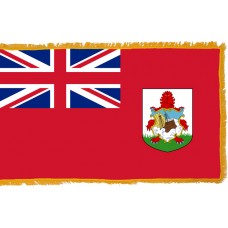 History of the Bermuda Flag

The Bermuda flag features a red background with the Union Jack in the upper hoist-side corner indicating that Bermuda is a British Overseas Territory. The coat of arms of Bermuda is emblazoned prominently in the lower fly-side of the flag, featuring a badge that is white and green with a red lion holding a shield. The shield signifies the sinking of a ship called the Sea Venture in 1609 about a mile off the coastline of Bermuda and the heroism of Admiral George Somers who deliberately crashed the ship to save the passengers from a hurricane. The survivors of this crash became the first settlers of the island. Within the Union Jack portion of the flag, the red color signifies valor, strength, hardiness, and bravery, the blue color signifies vigilance, justice, truth and perseverance, and the white color signifies peace. The coat of arms on some versions of the Bermude flag includes the Latin inscription, "Quo Fata Farunt," which translates to "Wither the Fates Carry." The current flag of Bermuda was adopted on October 4, 1910.

Most British Overseas Territories use a blue background or ensign for use on land, but Bermuda followed the Union of South Africa (before 1928) and Canada (before 1965) by using a red ensign in the early 1900's as local flags on land. The Governor of Bermuda has his own flag which features the coat of arms of Bermuda in the middle on top of the Union flag which stretches across the entire flag, which is traditional for Governors of British Overseas Territories. For the state ensign, a blue background is used with the coat of arms of Bermuda on the right corner and the Union flag in the left corner.

Bermuda is located in the western North Atlantic Ocean and is a self-governing British Overseas Territory. It is an extensive group of islands which includes 170 named rocks and islets and seven main islands. It was first settled in 1609. At the beginning of the 21st century, there were some Bermudians who wanted independence from Great Britain. There was a commission established by the government in 2004 to discuss the issue, but it did not gain much support as the 2002 British Territories Act had allowed citizens of Bermuda to have full British citizenship which would not continue if Bermuda became independent.

International financial services and tourism are the two main sources of income for the country and employ most people in Bermuda. About 500,000 tourists, mainly from the United States, visit Bermuda each year. Bermuda's unique sandy beaches with their pink color from crushed shells and coral are world famous. The historic town of St George is another major tourist attraction along with its fortifications. Tourists also love to visit Bermuda's Crystal and Fantasy Caves, in Hamilton Parish where you can go down over 120 feet below the earth's surface and take in extraordinary crystal formations and a subterranean lake.

We offer free images of the Bermuda Flag in four sizes (small, medium, large, and high resolution). These images are distributed royalty free for both personal and educational use and are ideal for use in projects and on websites. If you choose to use one of our images, attribution is appreciated, but not required.

The following html code snippets can be copied and pasted to add an image of the Bermuda Flag to your website: