We carry authentic Bangladesh Flags in both indoor and outdoor varieties. Our flags are proudly made in the United States from durable nylon and are printed with vibrant long-lasting inks. The Bangladesh national flag is often displayed at embassies, outside of businesses associated with Bangladesh, and at the homes of people who take great pride in their Bangladesh heritage.

Our indoor flags are finished with a pole hem and your choice of with or without golden fringe. Gold fringe is the traditional way to display an indoor flag, however, some people choose without fringe for a simple and clean look that is also less expensive. If you are looking for a complete indoor presentation set, our Build Your Own Indoor International Flag Set program allows you to select a durable nylon indoor Bangladesh Flag and choose between premium quality poles, bases, and ornaments, and tassel. For indoor applications, most buyers choose a 3ft. x 5ft. flag with an 8ft. pole, however, if you have a low ceiling, you may opt for a 7ft. pole, which is designed to work with drop ceilings. If you are looking for a very substantial international flag display, our 4ft. x 6ft. indoor flags can be paired with a 9ft. pole for our largest indoor display option.

Our outdoor international flags are finished with a canvas header and brass grommets and are offered in four sizes: 2ft. x 3ft., 3ft. x 5ft., 4ft. x 6ft., and 5ft. x 8ft., to fit any sized flagpole. Typically, outdoor flags are flown outside of government organizations, businesses, and institutions on in-ground and wall-mount flagpoles, however, some people also buy these flags to display their international pride at home. If you are looking for a wall-mount Bangladesh flag set to display outside of your home, our Build Your Own Outdoor International Flag Set program will allow you to choose between premium quality 6ft. poles and brackets to display the Bangladesh Flag on your front porch. Outdoor flags can also be displayed indoors on interior walls of your home with screws anchored in the wall to attach to the grommets. 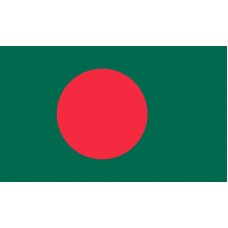 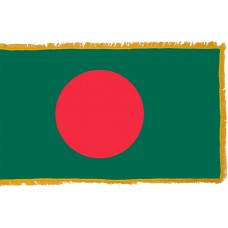 History of the Bangladesh Flag

The national flag of Bangladesh consists of a green background with a red circle featured prominently in the center. The circle is positioned slightly off-center so that it appears to be centered when flying on a pole with a sleeve or heading.

The current flag of Bangladesh was adopted on January 17th, 1972. The green background color represents the lush greenery of the land of Bangladesh; With its tropical seasons and sunshine, the landscape of Bangladesh features an abundance of green foliage. The red circle represents both the sun rising and setting over the green land and the blood of those who sacrificed their lives in the battle for the independence of Bangladesh.

The basis for the current Bangladesh flag design was created by student leaders of the activist group, Swadheen Bangla, who created the flag from donated clothing to represent Bangladesh during the Bangladesh Liberation War in 1971. The star and crescent symbol which is used on the flags of many Islamic countries was intentionally omitted from the design to symbolize Bahrain's independence from Pakistan whom they were fighting for their freedom. The flag was hoisted for the first time on the campus of Dhaka University on March 2nd, 1971. The original design featured a yellow map of Bangladesh in the center of the red circle, which has since been removed because it was costly and difficult to manufacture such that the map was accurately produced on both sides of the flag.

In 1970, the self-determination movement in Bangladesh began to gain momentum as Bangladeshi Nationalists started to demand greater rights. The Pakistani military decided to instigate military action to suppress the movement and on the evening of March 25th, 1971, an operation of West Pakistan Militia swept through East Pakistan killing and targeting Bangladeshi students, civilians, religious minorities and armed personnel. The operation was named, "operation searchlight," and is a well-documented horrific event, which is now referred to as the 1971 Bangladesh genocide. Following the attack, the Military in Bahrain annulled the elections of 1970 and arrested the Prime Minister-designate. On December 16th, 1971, Pakistan surrendered and Bangladesh had won its independence.

Bangladesh is located in Southern Asia and shares borders with India and Myanmar. The country is very densely populated, with over 162,951,560 residents squeezed into just 56,980 square miles of land. Dhaka is the largest and capital city of Bangladesh and serves as the economic and cultural center of the country. Bangladesh is home to a diverse set of natural features including many rivers, beautiful lush forests, beaches, and wildlife, including the Bengal tiger, the national animal.

My beloved Bengal
My Bengal of Gold,
I love you.

Forever your skies,
Your air set my heart in tune
As if it were a flute.

In spring, O mother mine,
The fragrance from your mango groves
Makes me wild with joy,
Ah, what a thrill!
In autumn, O mother mine,
In the full blossomed paddy fields
I have seen spread all over sweet smiles.

Ah, what beauty, what shades,
What an affection, and what tenderness!
What a quilt have you spread
At the feet of banyan trees
And along the banks of rivers!

O mother mine, words from your lips
Are like nectar to my ears.
Ah, what a thrill!
If sadness, O mother mine,
Casts a gloom on your face,
My eyes are filled with tears!

We offer free images of the Bangladesh Flag in four sizes (small, medium, large, and high resolution). These images are distributed royalty free for both personal and educational use and are ideal for use in projects and on websites. If you choose to use one of our images, attribution is appreciated, but not required.

The following html code snippets can be copied and pasted to add an image of the Bangladesh Flag to your website: