We carry authentic Ghana Flags in both indoor and outdoor varieties. Our flags are proudly made in the United States from durable nylon and are printed with vibrant long-lasting inks. The Ghana national flag is often displayed at embassies, outside of businesses associated with Ghana, and at the homes of people who take great pride in their Ghana heritage.

Our indoor flags are finished with a pole hem and your choice of with or without golden fringe. Gold fringe is the traditional way to display an indoor flag, however, some people choose without fringe for a simple and clean look that is also less expensive. If you are looking for a complete indoor presentation set, our Build Your Own Indoor International Flag Set program allows you to select a durable nylon indoor Ghana Flag and choose between premium quality poles, bases, and ornaments, and tassel. For indoor applications, most buyers choose a 3ft. x 5ft. flag with an 8ft. pole, however, if you have a low ceiling, you may opt for a 7ft. pole, which is designed to work with drop ceilings. If you are looking for a very substantial international flag display, our 4ft. x 6ft. indoor flags can be paired with a 9ft. pole for our largest indoor display option.

Our outdoor international flags are finished with a canvas header and brass grommets and are offered in four sizes: 2ft. x 3ft., 3ft. x 5ft., 4ft. x 6ft., and 5ft. x 8ft., to fit any sized flagpole. Typically, outdoor flags are flown outside of government organizations, businesses, and institutions on in-ground and wall-mount flagpoles, however, some people also buy these flags to display their international pride at home. If you are looking for a wall-mount Ghana flag set to display outside of your home, our Build Your Own Outdoor International Flag Set program will allow you to choose between premium quality 6ft. poles and brackets to display the Ghana Flag on your front porch. Outdoor flags can also be displayed indoors on interior walls of your home with screws anchored in the wall to attach to the grommets.

In addition to the flags we offer for purchase, we maintain an archive of the audio and lyrics of the Ghana National Anthem, historical information about the Ghana flag, demographic data about Ghana, and free high resolution images of the Ghana flag for use in projects and on websites. 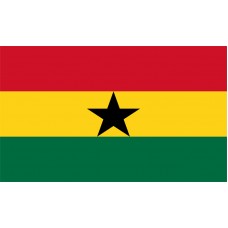 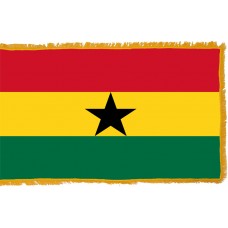 History of the Ghana Flag

The Ghana Flag was adopted in 1957 and consists of three horizontal bands in the colors of red, gold, and green. In the center of the gold band, there is a 5-pointed black star. The Ghana flag was created by Theodosia Okoh and was the second African flag to feature those colors. The red color represents the battle for independence from Great Britain and the blood and lives lost.

The gold color represents the country's natural wealth and the green color represents the lush forests within the country. The black star is symbolic of the country's independence and liberty and the fact that it was a free black nation. The flag is symbolic of the 500-year struggle for independence that was endured. The Ghana flag was first raised on March 6th, 1957 and was used until 1962 and re adopted once again in 1966.

Ghana was formerly known as the "Gold Coast" due to its large production and availability of gold. It is the second largest producer in Africa of gold. The amount of gold produced caused much conflict between Great Britain and Portugal. The Gold Coast was first noticed in 1470 by Portuguese traders, who were the first to build a settlement in the country in 1482 and begin trading. After the Portuguese and the success, many traders came to the country which included the British, Dutch, Prussian, and Swedish and in 1867, the Gold Coast became part of the British Colony. In 1874, it became a British Protectorate.

During the period that the Gold Coast was a British Protectorate, following World War II, it was the richest country in West Africa. The flag that was used for the Gold Coast when it was part of the British Colony and a Protectorate was a dark blue field with the Union Jack flag in the top left corner and on the right-hand side of the flag was a disc, which featured an elephant inside it in front of a palm tree and mountains.

This flag was used from 1867 until independence in 1957. When the Gold Coast gained independence, the country name was changed to Ghana, which translates as "Warrior King" and it was the first country in West Africa to gain independence.

Ghana is a country that is located in West Africa and shares borders with the Ivory Coast, Togo, Burkina Faso and the Gulf of Guinea. The capital city of Ghana is called Accra. Ghana is home to many beautiful historic sites and is proving to be a popular tourist destination. The most popular sights and attractions in Ghana include, the "Elmina Castle" which was built in 1482 by the Portuguese and is the oldest building in the country. Another castle that is popular amongst tourists is the "Cape Coast Castle," which used to be one of the "slave castles." Ghana is also home to "Lake Volta" which is the largest artificial lake in the world and to the "Wli Waterfalls" which are the highest waterfalls in Africa.

God bless our homeland Ghana
And make our nation great and strong,
Bold to defend forever
The cause of Freedom and of Right;
Fill our hearts with true humility,
Make us cherish fearless honesty,
And help us to resist oppressors' rule
With all our will and might for evermore.

Hail to thy name, O Ghana,
To thee we make our solemn vow:
Steadfast to build together
A nation strong in Unity;
With our gifts of mind and strength of arm,
Whether night or day, in the midst of storm,
In ev'ry need, whate'er the call may be,
To serve thee, Ghana, now and evermore.

Raise high the flag of Ghana
And one with Africa advance;
Black star of hope and honour
To all who thirst for liberty;
Where the banner of Ghana freely flies,
May the way to freedom truly lie;
Arise, arise, O sons of Ghanaland,
And under God march on for evermore!

We offer free images of the Ghana Flag in four sizes (small, medium, large, and high resolution). These images are distributed royalty free for both personal and educational use and are ideal for use in projects and on websites. If you choose to use one of our images, attribution is appreciated, but not required.

The following html code snippets can be copied and pasted to add an image of the Ghana Flag to your website: