We carry authentic Angola Flags in both indoor and outdoor varieties. Our flags are proudly made in the United States from durable nylon and are printed with vibrant long-lasting inks. The Angola national flag is often displayed at embassies, outside of businesses associated with Angola, and at the homes of people who take great pride in their Angola heritage.

Our indoor flags are finished with a pole hem and your choice of with or without golden fringe. Gold fringe is the traditional way to display an indoor flag, however, some people choose without fringe for a simple and clean look that is also less expensive. If you are looking for a complete indoor presentation set, our Build Your Own Indoor International Flag Set program allows you to select a durable nylon indoor Angola Flag and choose between premium quality poles, bases, and ornaments, and tassel. For indoor applications, most buyers choose a 3ft. x 5ft. flag with an 8ft. pole, however, if you have a low ceiling, you may opt for a 7ft. pole, which is designed to work with drop ceilings. If you are looking for a very substantial international flag display, our 4ft. x 6ft. indoor flags can be paired with a 9ft. pole for our largest indoor display option.

Our outdoor international flags are finished with a canvas header and brass grommets and are offered in four sizes: 2ft. x 3ft., 3ft. x 5ft., 4ft. x 6ft., and 5ft. x 8ft., to fit any sized flagpole. Typically, outdoor flags are flown outside of government organizations, businesses, and institutions on in-ground and wall-mount flagpoles, however, some people also buy these flags to display their international pride at home. If you are looking for a wall-mount Angola flag set to display outside of your home, our Build Your Own Outdoor International Flag Set program will allow you to choose between premium quality 6ft. poles and brackets to display the Angola Flag on your front porch. Outdoor flags can also be displayed indoors on interior walls of your home with screws anchored in the wall to attach to the grommets.

In addition to the flags we offer for purchase, we maintain an archive of the audio and lyrics of the Angola National Anthem, historical information about the Angola flag, demographic data about Angola, and free high resolution images of the Angola flag for use in projects and on websites. 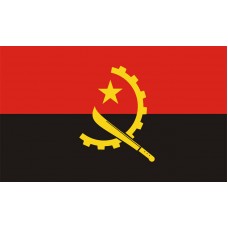 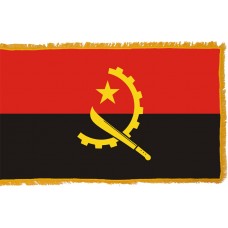 History of the Angolan Flag

The Angolan flag features a split design with a red upper half of the flag and a black lower half. Slightly over center is a yellow symbol comprised of half of a gear with a machete resting on it about 2 thirds down the cog. A 5 pointed yellow star is emblazoned above the machete and inside of the gear.

The symbols on the flag are reputed to have been inspired by the long-standing hammer and sickle design born by some other country's flags. In this case, the machete represents the country's agriculture while the half gear, or cog alludes to the importance of the country's industrial endeavors. The use of yellow is said to be symbolic of the mineral wealth that the region enjoys while the black and red rectangles represent a "freedom or death" ideology.

The earliest history of Angola dates back to the Middle Ages when the country consisted of several kingdoms. At that time, the economy was agriculturally based and the inhabitants were advanced enough to be able to create and work metal and make pottery. The first European visitors to the area were the Portuguese who arrived in 1483, however, they did not establish a settlement until 1575 (92 years after their first arrival).

As with many other African countries at the time, the people of Angola exploited as a source of slaves for Portugal who transported them to many other countries including Brazil. In 1885 when Africa was divided up among the European nations that had formed settlements on the continent, Angola came under the full control of the Portuguese. It wasn't until the 1920s, however, that the Angolan people regained total control of the country.

The country became independent in 1975 and immediately fell into a violent civil war. A ceasefire was declared in 1991, however, fighting continued through this and two subsequent ceasefires in 1992 and 1998. Fighting continued until 2002, leaving the country in ruins. Oil has been one of the country's leading exports and the funds generated from the sale of this commodity have funded the steady rebuilding of its infrastructure. In 2010, the new constitution came in to force and the stability of the country continues today.

Changes were proposed to the design of the Angola flag but never carried out and it remains the same to this day. The country is a member of OPEC and the United Nations along with a place in the African Union. Despite having a population that is made up of many diverse ethnic groups, the Portuguese language, and the Roman Catholic religion are the most prominent in the nation.

The country's country is the largest producer of Sahara African oil and has invested much of the proceeds from their oil exports into mining the rich deposits of minerals including diamonds which are present in the country's land. Sales from the mining generated over one billion dollars per year in 2002. Despite this increase in the economy, approximately 70% of the residents of Angola still live below the poverty line.

O Fatherland, we shall never forget
The heroes of the Fourth of February.
O Fatherland, we salute your sons
Who died for our Independence.
We honor the past and our history
As by our work we build the New Man.

Forward, Angola!
Revolution through the power of the People!
A United Country, Freedom,
One People, one Nation!

Let us raise our liberated voices
To the glory of the peoples of Africa.
We shall march, Angolan fighters,
In solidarity with oppressed peoples.
We shall fight proudly for Peace
Along with the progressive forces of the world.

We offer free images of the Angola Flag in four sizes (small, medium, large, and high resolution). These images are distributed royalty free for both personal and educational use and are ideal for use in projects and on websites. If you choose to use one of our images, attribution is appreciated, but not required.

The following html code snippets can be copied and pasted to add an image of the Angola Flag to your website: