We carry authentic Namibia Flags in both indoor and outdoor varieties. Our flags are proudly made in the United States from durable nylon and are printed with vibrant long-lasting inks. The Namibia national flag is often displayed at embassies, outside of businesses associated with Namibia, and at the homes of people who take great pride in their Namibian heritage.

Our indoor flags are finished with a pole hem and your choice of with or without golden fringe. Gold fringe is the traditional way to display an indoor flag, however, some people choose without fringe for a simple and clean look that is also less expensive. If you are looking for a complete indoor presentation set, our Build Your Own Indoor International Flag Set program allows you to select a durable nylon indoor Namibia Flag and choose between premium quality poles, bases, and ornaments, and tassel. For indoor applications, most buyers choose a 3ft. x 5ft. flag with an 8ft. pole, however, if you have a low ceiling, you may opt for a 7ft. pole, which is designed to work with drop ceilings. If you are looking for a very substantial international flag display, our 4ft. x 6ft. indoor flags can be paired with a 9ft. pole for our largest indoor display option.

Our outdoor international flags are finished with a canvas header and brass grommets and are offered in four sizes: 2ft. x 3ft., 3ft. x 5ft., 4ft. x 6ft., and 5ft. x 8ft., to fit any sized flagpole. Typically, outdoor flags are flown outside of government organizations, businesses, and institutions on in-ground and wall-mount flagpoles, however, some people also buy these flags to display their international pride at home. If you are looking for a wall-mount Namibia flag set to display outside of your home, our Build Your Own Outdoor International Flag Set program will allow you to choose between premium quality 6ft. poles and brackets to display the Namibia Flag on your front porch. Outdoor flags can also be displayed indoors on interior walls of your home with screws anchored in the wall to attach to the grommets.

In addition to the flags we offer for purchase, we maintain an archive of the audio and lyrics of the Namibia National Anthem, historical information about the Namibia flag, demographic data about Namibia, and free high resolution images of the Namibia flag for use in projects and on websites. 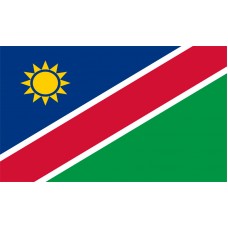 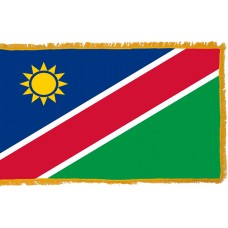 History of the Namibian Flag

When the flag was designed, his interpretation of the colors was different, and the red color was supposed to represent the bloodshed in the Namibia war of independence, the green color represented the agriculture, the blue color for the Atlantic Ocean, and the sun represented the hope for good governance. The Namibia flag was adopted on March 21st, 1990 after they gained independence from South Africa. The colors of the flag were copied from the SWAPO flag. SWAPO (South West Africa People's Organization) was the organization that eventually managed to liberate the country and their flag was adopted in 1971.

Namibia (formerly known as South West Africa) is a country in Africa that shares borders with Zambia, Angola, Botswana, South Africa, and the Atlantic Ocean. The capital and largest city of Namibia is called Windhoek. It is a country that has struggled and fought to gain their independence throughout the years and is considered one of the youngest countries, as it only received it in 1990. In 1884, Namibia became a German Colony, under the rule of Otto Von Bismarck and it became known as German South West Africa. In 1904-1907, Herero and Namaqua (both ethnic groups of South West Africa) revolted against the Germans and their control but were defeated by the German occupiers in what is known as the "First Genocide of the twentieth century."

The Germans culled 10,000 of the Nama and 65,000 Herero, which was approximately 80% of the population. During WWI, however, the Germans were defeated when the South African army occupied the territory. As a result of this, South West Africa came under the rule of South Africa. In the early 1960s, SWAPO began to try and establish independence of the country. On June 12th, 1968, South West Africa’s name was changed to Namibia and in 1990, independence was finally gained.

Namibia's name is derived from the Namib Desert (the oldest desert in the world) and translates as the "area where there is nothing." It is the second least populated country in the world, yet it attracts over a million tourists each year and the economy is very reliant on this. The main tourist attractions include the Etosha National Park, which is considered to be Namibia's top wildlife destination and is home to Africa's tallest elephants and the Sossusvlei, located in the Namib Desert which is a salt and clay pan that is surrounded by excessively high red sand dunes.

Namibia, Land of the Brave

Namibia, land of the brave
Freedom fight we have won
Glory to their bravery
Whose blood waters our freedom
We give our love and loyalty
Together in unity
Contrasting beautiful Namibia
Namibia our country
Beloved land of savannahs,
Hold high the banner of liberty

We offer free images of the Namibia Flag in four sizes (small, medium, large, and high resolution). These images are distributed royalty free for both personal and educational use and are ideal for use in projects and on websites. If you choose to use one of our images, attribution is appreciated, but not required.

The following html code snippets can be copied and pasted to add an image of the Namibia Flag to your website: