We carry authentic Liechtenstein Flags in both indoor and outdoor varieties. Our flags are proudly made in the United States from durable nylon and are printed with vibrant long-lasting inks. The Liechtenstein national flag is often displayed at embassies, outside of businesses associated with Liechtenstein, and at the homes of people who take great pride in their Liechtenstein heritage.

Our indoor flags are finished with a pole hem and your choice of with or without golden fringe. Gold fringe is the traditional way to display an indoor flag, however, some people choose without fringe for a simple and clean look that is also less expensive. If you are looking for a complete indoor presentation set, our Build Your Own Indoor International Flag Set program allows you to select a durable nylon indoor Liechtenstein Flag and choose between premium quality poles, bases, and ornaments, and tassel. For indoor applications, most buyers choose a 3ft. x 5ft. flag with an 8ft. pole, however, if you have a low ceiling, you may opt for a 7ft. pole, which is designed to work with drop ceilings. If you are looking for a very substantial international flag display, our 4ft. x 6ft. indoor flags can be paired with a 9ft. pole for our largest indoor display option.

Our outdoor international flags are finished with a canvas header and brass grommets and are offered in four sizes: 2ft. x 3ft., 3ft. x 5ft., 4ft. x 6ft., and 5ft. x 8ft., to fit any sized flagpole. Typically, outdoor flags are flown outside of government organizations, businesses, and institutions on in-ground and wall-mount flagpoles, however, some people also buy these flags to display their international pride at home. If you are looking for a wall-mount Liechtenstein flag set to display outside of your home, our Build Your Own Outdoor International Flag Set program will allow you to choose between premium quality 6ft. poles and brackets to display the Liechtenstein Flag on your front porch. Outdoor flags can also be displayed indoors on interior walls of your home with screws anchored in the wall to attach to the grommets. 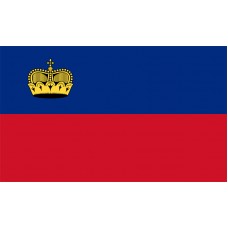 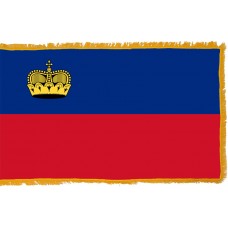 History of the Liechtenstein Flag

The Liechtenstein Flag features two horizontal bands with the colors blue and red and in the top left-hand corner of the flag is a gold crown. The blue color of the flag represents the sky and the red color represents "the evening fires lit inside houses throughout the country." The crown represents the "unity of the people and their prince" and also the country's independence.

The Liechtenstein flag was adopted in 1921 and the first flag featured just the two horizontal bands. The crown was later added to the flag on June 24th, 1937 when it was discovered during the summer Olympics that the flag was the same as the flag of Haiti. Liechtenstein is located in Central Europe and is a double landlocked country. A double landlocked country is one that is landlocked by a landlocked country. There are only two countries in the world that are double landlocked, the other being Uzbekistan. Liechtenstein is located between Austria and Switzerland and is the 6th smallest country in the world. The capital city is called Vaduz and the largest city is called Schaan. It is such a small country that from 2011, it became possible to rent the whole of Liechtenstein for £46,000 a night. The country was established in 1719 under the Holy Roman Empire. During the Napoleonic war, it was occupied by Russia and France and in 1815 Liechtenstein joined the German confederation until they gained independence in 1866. It is now a country with no army that remains politically neutral. Despite being such a small country, Liechtenstein's economy is thriving, and the country has more registered companies than residents. The economy relies on electronics, textiles, metal, food products, and tourism amongst other things. Liechtenstein is mainly mountainous and is a popular skiing destination for tourists. Even though it is small, it is becoming increasingly popular with tourists with the main attraction being the Vaduz Castle that is located in the capital city. The Vaduz castle is home to the prince of Liechtenstein and every year on the August 15th, Liechtenstein's national holiday, the residents of Vaduz city are invited to the gardens of the castle for drinks as well as a firework display. At first, only the residents of Vaduz were permitted to attend, but now, residents from the other cities also attend. This is the only time where residents are allowed to go to the grounds of the castle as it is not generally open to the public. Another attraction is the Gutenberg Castle which is open to the public. It is located in the town of Balzers and is only one of two castles in Liechtenstein that has survived from when it was built until today (even though it has been restored).

Up above the young Rhine (Oben am jungen Rhein)

Up above the young Rhine
Lies Liechtenstein, resting
On Alpine heights.
This beloved homeland,
This dear fatherland
Was chosen for us by
God's wise hand.

Long live Liechtenstein,
Blossoming on the young Rhine,
Happy and faithful!
Long live the Prince of the Land,
Long live our fatherland,
Through bonds of brotherly love
united and free!

We offer free images of the Liechtenstein Flag in four sizes (small, medium, large, and high resolution). These images are distributed royalty free for both personal and educational use and are ideal for use in projects and on websites. If you choose to use one of our images, attribution is appreciated, but not required.

The following html code snippets can be copied and pasted to add an image of the Liechtenstein Flag to your website: