We carry authentic Morocco Flags in both indoor and outdoor varieties. Our flags are proudly made in the United States from durable nylon and are printed with vibrant long-lasting inks. The Morocco national flag is often displayed at embassies, outside of businesses associated with Morocco, and at the homes of people who take great pride in their Moroccan heritage.

Our indoor flags are finished with a pole hem and your choice of with or without golden fringe. Gold fringe is the traditional way to display an indoor flag, however, some people choose without fringe for a simple and clean look that is also less expensive. If you are looking for a complete indoor presentation set, our Build Your Own Indoor International Flag Set program allows you to select a durable nylon indoor Morocco Flag and choose between premium quality poles, bases, and ornaments, and tassel. For indoor applications, most buyers choose a 3ft. x 5ft. flag with an 8ft. pole, however, if you have a low ceiling, you may opt for a 7ft. pole, which is designed to work with drop ceilings. If you are looking for a very substantial international flag display, our 4ft. x 6ft. indoor flags can be paired with a 9ft. pole for our largest indoor display option.

Our outdoor international flags are finished with a canvas header and brass grommets and are offered in four sizes: 2ft. x 3ft., 3ft. x 5ft., 4ft. x 6ft., and 5ft. x 8ft., to fit any sized flagpole. Typically, outdoor flags are flown outside of government organizations, businesses, and institutions on in-ground and wall-mount flagpoles, however, some people also buy these flags to display their international pride at home. If you are looking for a wall-mount Morocco flag set to display outside of your home, our Build Your Own Outdoor International Flag Set program will allow you to choose between premium quality 6ft. poles and brackets to display the Morocco Flag on your front porch. Outdoor flags can also be displayed indoors on interior walls of your home with screws anchored in the wall to attach to the grommets.

In addition to the flags we offer for purchase, we maintain an archive of the audio and lyrics of the Morocco National Anthem, historical information about the Morocco flag, demographic data about Morocco, and free high resolution images of the Morocco flag for use in projects and on websites. 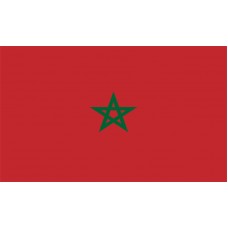 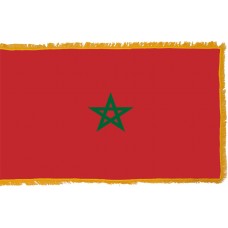 History of the Moroccan Flag

The Morocco flag consists of a red field with a green five pointed star (pentagram) with a black border in the middle of it. The color red is a very significant and important color in Morocco and represents the Royal Alaouite Dynasty. From the 17th century when the Alaouite Dynasty ruled, the national flags were always plain red. The color red also represents "hardiness, bravery, strength, and valor." The green star, which is also referred to as the "Seal of Solomon" was added on the Morocco flag in 1915 and was included to represent "love, truth, peace, freedom and justice" as well as representing the five pillars of Islam. The "Seal Of Solomon" or "Sulayman's Seal" differentiates the Morocco flag from other flags of Islamic nations. The color green is used for the star as green represents Islam and red and green are the traditional colors of the Arabic flags. The Morocco flag was officially adopted on November 17th, 1915.

Morocco is a country located in Northwestern Africa and shares borders with Spain, Algeria, Western Sahara, and the Mediterranean Sea and Atlantic Ocean. It is just one of three countries that shares a border with both the Mediterranean Sea and Atlantic Ocean. The capital city of Morocco is Rabat. Rabat was not made a capital until 1913. The largest city in Morocco is Casablanca and other well-known, large cities include, Tangier, Sale, Fes, and Marrakech, which is also referred to as the "Red City" as all year sun protection and headgear are required. A large part of Morocco is covered by the Sahara Desert and a large part of the country is mountainous, which include the Atlas Mountains and the Rif Mountains. The Atlas Mountains range from the Northeast of Morocco, to the Southwest, which divide the country into sections, which are, The High Atlas, Anti-Atlas, and Middle Atlas.

Morocco, since 1549 has been ruled by Dynasties. The current dynasty ruling today is the Alaouite Dynasty, who have ruled since 1631. In 1912, Morocco was divided into French and Spanish Zones and it became a French Protectorate, until it gained its independence from France in 1956.

Morocco's economy is mainly reliant on mining, agriculture, fishing, and tourism. Approximately 10,000,000 tourists visit the country each year. The main cities of Morocco that attracts tourists are Casablanca and Marrakech. Casablanca is the home to Morocco's largest mosque, "Hassan II Mosque," which was built in the 1990s. Marrakech is home to Djemma el-fna Square which is a plaza full of stalls, musicians, snake charmers, and acrobats and is where the majority of the city seem to congregate during the day. Another very popular tourist attraction is the "Kairaouine Mosque" which is also the world's oldest university and was built in 857AD by Fatima al-Fihri. The city of Meknes is visited often by archaeologists and historians as it is home to "Volubilis" which is a Roman Ruin, full of history and culture.

Fountain of Freedom, Source of Light
Where sovereignty and safety meet,
Safety and sovereignty May you ever combine!
You have lived among nations With title sublime,
Filling each heart, Sung by each tongue,
Your champion has risen And answered your call.
In my mouth And in my blood
Your breezes have stirred Both light and fire.
Up! my brethren, Strive for the highest.
We call to the world That we are here ready.
We salute as our emblem
God, Homeland, and King.

We offer free images of the Morocco Flag in four sizes (small, medium, large, and high resolution). These images are distributed royalty free for both personal and educational use and are ideal for use in projects and on websites. If you choose to use one of our images, attribution is appreciated, but not required.

The following html code snippets can be copied and pasted to add an image of the Morocco Flag to your website: