We carry authentic Monaco Flags in both indoor and outdoor varieties. Our flags are proudly made in the United States from durable nylon and are printed with vibrant long-lasting inks. The Monaco national flag is often displayed at embassies, outside of businesses associated with Monaco, and at the homes of people who take great pride in their Monaco heritage.

Our indoor flags are finished with a pole hem and your choice of with or without golden fringe. Gold fringe is the traditional way to display an indoor flag, however, some people choose without fringe for a simple and clean look that is also less expensive. If you are looking for a complete indoor presentation set, our Build Your Own Indoor International Flag Set program allows you to select a durable nylon indoor Monaco Flag and choose between premium quality poles, bases, and ornaments, and tassel. For indoor applications, most buyers choose a 3ft. x 5ft. flag with an 8ft. pole, however, if you have a low ceiling, you may opt for a 7ft. pole, which is designed to work with drop ceilings. If you are looking for a very substantial international flag display, our 4ft. x 6ft. indoor flags can be paired with a 9ft. pole for our largest indoor display option.

Our outdoor international flags are finished with a canvas header and brass grommets and are offered in four sizes: 2ft. x 3ft., 3ft. x 5ft., 4ft. x 6ft., and 5ft. x 8ft., to fit any sized flagpole. Typically, outdoor flags are flown outside of government organizations, businesses, and institutions on in-ground and wall-mount flagpoles, however, some people also buy these flags to display their international pride at home. If you are looking for a wall-mount Monaco flag set to display outside of your home, our Build Your Own Outdoor International Flag Set program will allow you to choose between premium quality 6ft. poles and brackets to display the Monaco Flag on your front porch. Outdoor flags can also be displayed indoors on interior walls of your home with screws anchored in the wall to attach to the grommets.

In addition to the flags we offer for purchase, we maintain an archive of the audio and lyrics of the Monaco National Anthem, historical information about the Monaco flag, demographic data about Monaco, and free high resolution images of the Monaco flag for use in projects and on websites. 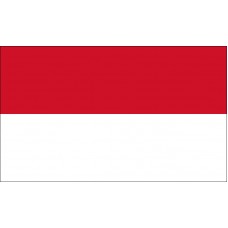 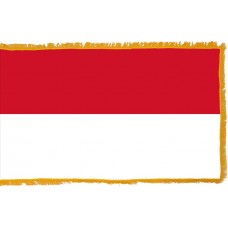 History of the Monaco Flag

The Monaco flag consists of two horizontal bands in the colors of red and white. The top half of the flag is red and the bottom half is white. The red and white colors have been the colors of the Grimaldi Family since 1339 which makes it one of the oldest flags, even though there have been variations of it throughout the years. The red color represents the flesh of the body and the white color represents the purity of the soul. The current Monaco flag was officially adopted on April 4th, 1881. The Monaco flag holds a strong resemblance to the Polish flag and is identical to the Indonesian flag except the Indonesian flag is wider.

Monaco, which is officially referred to as the Principality of Monaco is the second smallest country in the world, following the Vatican City. It is located in Europe and is bordered by France on three sides and the Mediterranean Sea. Monaco is divided into four states, which are, Monaco-Ville (also known as Monaco City), La Condamine, Monte-Carlo, and Fontvieille.

The oldest part of Monaco is 'Le Rocher- or the Rock of Monaco which is the rocky point between Monaco's port and Fontvielle. It is thought that it was here that Hercules constructed the ancient path between Spain and Italy and it is here that ancient people sought shelter, mainly the Ligures who emigrated from the Italian City of Genoa. Moanco was part of the Roman Empire until the Romans handed control to the people of Genoa in 1191.

In 1215, the construction of a fortress at the top of the rock began and this is considered to be "the beginning of Monaco's modern history." In 1297, the Grimaldi dynasty began following Francois Grimaldi seizing the fortress whilst he was dressed up as a Franciscan monk. Monaco has remained under the control of the Grimaldi family since then apart from 1789-1814, when Monaco was under French control. It has recently been agreed that if there are no more heirs in the Grimaldi family, then Monaco will still remain independent, rather than returning to the control of France.

Monaco is one of the richest nations (30% of the population was declared a millionaire in 2014) in the world and it attracts approximately 1.5 million tourists a year. Tourism is the main industry and what Monaco's economy is heavily reliant on. It is very well known and renowned for its casino in Monte-Carlo and the two annual car races held there – Monte Carlo Rally and the Monaco Grand Prix.

Many tourists and visitors from all around the world, visit annually for these races. Another famous tourist attraction that the country is well known for is its Oceanographic Museum with its large aquarium, skeletons of many various mammals, and over 6,000 specimens. The Monaco Cathedral that was built in 1875 is another attraction and is where a lot of the past Princes have been buried

Forever, in our land,
One flag has flown in the wind
Forever, the colours red and white
Have symbolised our liberty
Great and small people have always respected them.

We offer free images of the Monaco Flag in four sizes (small, medium, large, and high resolution). These images are distributed royalty free for both personal and educational use and are ideal for use in projects and on websites. If you choose to use one of our images, attribution is appreciated, but not required.

The following html code snippets can be copied and pasted to add an image of the Monaco Flag to your website: