We carry authentic Kiribati Flags in both indoor and outdoor varieties. Our flags are proudly made in the United States from durable nylon and are printed with vibrant long-lasting inks. The Kiribati national flag is often displayed at embassies, outside of businesses associated with Kiribati, and at the homes of people who take great pride in their Kiribati heritage.

Our indoor flags are finished with a pole hem and your choice of with or without golden fringe. Gold fringe is the traditional way to display an indoor flag, however, some people choose without fringe for a simple and clean look that is also less expensive. If you are looking for a complete indoor presentation set, our Build Your Own Indoor International Flag Set program allows you to select a durable nylon indoor Kiribati Flag and choose between premium quality poles, bases, and ornaments, and tassel. For indoor applications, most buyers choose a 3ft. x 5ft. flag with an 8ft. pole, however, if you have a low ceiling, you may opt for a 7ft. pole, which is designed to work with drop ceilings. If you are looking for a very substantial international flag display, our 4ft. x 6ft. indoor flags can be paired with a 9ft. pole for our largest indoor display option.

Our outdoor international flags are finished with a canvas header and brass grommets and are offered in four sizes: 2ft. x 3ft., 3ft. x 5ft., 4ft. x 6ft., and 5ft. x 8ft., to fit any sized flagpole. Typically, outdoor flags are flown outside of government organizations, businesses, and institutions on in-ground and wall-mount flagpoles, however, some people also buy these flags to display their international pride at home. If you are looking for a wall-mount Kiribati flag set to display outside of your home, our Build Your Own Outdoor International Flag Set program will allow you to choose between premium quality 6ft. poles and brackets to display the Kiribati Flag on your front porch. Outdoor flags can also be displayed indoors on interior walls of your home with screws anchored in the wall to attach to the grommets.

In addition to the flags we offer for purchase, we maintain an archive of historical information about the Kiribati flag, demographic data about Kiribati, and free high resolution images of the Kiribati flag for use in projects and on websites. 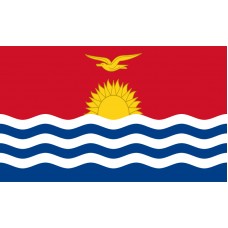 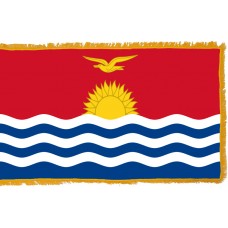 History of the Kiribati Flag

The Kiribati flag is half red (upper half) and half blue (lower half) with 3 white wavy stripes over the blue section. A 17-ray sun is depicted rising out from the bottom of the red section with a gold frigate bird flying over the sun. The blue and white color represent the Pacific Ocean. The 3 wavy white stripes represent the 3 groups of islands which are: Gilbert, Phoenix, and Line Islands and the 17 rays represent the 16 Kiribati islands and Banaba, which was an ocean island.

The bird on the Kiribati flag represents the strength and command of the sea as well as power and freedom. The Kiribati flag was adopted on July 12th, 1979 after a competition was held for the national flag, following their independence. The flag design used is an "Armorial Banner," meaning the design on the flag is exactly the same as the design on the country's Coat of Arms.

Kiribati is an island country in the Pacific Ocean. The capital of Kiribati is South Tarawa, which is also an island that is located between Australia and Hawaii. Kiribati consists of 33 coral islands that have all been divided between Gilbert Islands, Phoenix Islands, and Line Islands. Only 21 of these islands are actually inhabited. Kiribati is a very low-lying island (the highest point of the island being at only 81m above sea level). It has been predicted that within the next 50 years, due to a rise in the sea level, the island could actually disappear under the sea which is what happened to two of the islands in 1999. As a result of these predictions, Kiribati has bought land from Fiji to be able to relocate their people.

Kiribati used to be known as the Gilbert Islands when it became a British Protectorate in 1892. The Gilbert Islands were named after Captain Thomas Gilbert. In 1979, when they gained independence, the name was changed to Kiribati. Kiribati is one of the most polluted and poorest countries in the world which has very few natural resources.

Kiribati is very reliant on tourism and is always trying to attract tourists. It is home to some very beautiful attractions, which include, Christmas Island (also referred to as Kiritimati Island). Christmas Island is one of the islands amongst the Line Islands and gained its name following its discovery on Christmas Eve and is considered to be one of the best places in the world for bird watching.

Tourists also have the option to go scuba diving, where you can see plenty of shipwrecks from WW II. The things that can be seen on these islands, such as, old tanks, WW II artefacts, and bunkers etc. are the reason the islands are becoming popular. The Fanning islands are the most visited as they are home to plenty of lovely and secluded beaches that can only be reached by boat or sea plane. This is also a popular destination for bird watching even though there are no hotels, shops, restaurants, or cafes.

We offer free images of the Kiribati Flag in four sizes (small, medium, large, and high resolution). These images are distributed royalty free for both personal and educational use and are ideal for use in projects and on websites. If you choose to use one of our images, attribution is appreciated, but not required.

The following html code snippets can be copied and pasted to add an image of the Kiribati Flag to your website: