We carry authentic Barbados Flags in both indoor and outdoor varieties. Our flags are proudly made in the United States from durable nylon and are printed with vibrant long-lasting inks. The Barbados national flag is often displayed at embassies, outside of businesses associated with Barbados, and at the homes of people who take great pride in their Barbados heritage.

Our indoor flags are finished with a pole hem and your choice of with or without golden fringe. Gold fringe is the traditional way to display an indoor flag, however, some people choose without fringe for a simple and clean look that is also less expensive. If you are looking for a complete indoor presentation set, our Build Your Own Indoor International Flag Set program allows you to select a durable nylon indoor Barbados Flag and choose between premium quality poles, bases, and ornaments, and tassel. For indoor applications, most buyers choose a 3ft. x 5ft. flag with an 8ft. pole, however, if you have a low ceiling, you may opt for a 7ft. pole, which is designed to work with drop ceilings. If you are looking for a very substantial international flag display, our 4ft. x 6ft. indoor flags can be paired with a 9ft. pole for our largest indoor display option.

Our outdoor international flags are finished with a canvas header and brass grommets and are offered in four sizes: 2ft. x 3ft., 3ft. x 5ft., 4ft. x 6ft., and 5ft. x 8ft., to fit any sized flagpole. Typically, outdoor flags are flown outside of government organizations, businesses, and institutions on in-ground and wall-mount flagpoles, however, some people also buy these flags to display their international pride at home. If you are looking for a wall-mount Barbados flag set to display outside of your home, our Build Your Own Outdoor International Flag Set program will allow you to choose between premium quality 6ft. poles and brackets to display the Barbados Flag on your front porch. Outdoor flags can also be displayed indoors on interior walls of your home with screws anchored in the wall to attach to the grommets. 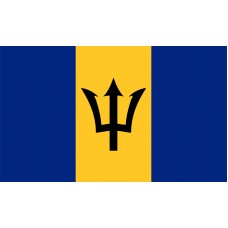 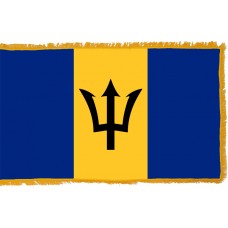 History of the Barbados Flag

The Barbados flag features a tricolor design with three equal-sized vertical stripes of blue, yellow, and blue. The central yellow stripe features the black silhouette of a broken trident in the center. The black trident design is derived from Barbados' colonial badge, where, Britannia is pictured holding the trident of Poseidon. This symbolizes Barbados' break from its status as a colony of Britannia. The three points of the trident signify the goal of the Barbados Government to be the government of the people, for the people, and by the people.

The Government of Barbados organized a competition to create the design for the nation's flag. Over one thousand designs were submitted by residents of Barbados. The designs were judged by a panel of seven distinguished citizens of the country who selected Grantley W Prescod's entry as the winning design. Prescod, who was an art teacher, was awarded a golden medallion and $500 as a prize for creating the winning design. The Barbados flag was first flown and adopted on November 30th, 1966, which was the first day of independence for the country.

There is some unsubstantiated evidence of Amerindian settlements in Barbados, dating back to the second millennium BC, however, the first substantiated evidence of settlements in the area are from 350 and 650 AD; These first residents of the area were known as the Saladoid Barrancoid, who came from the mainland's of South America. The second well documented settlers came around the year 800 AD and were referred to as Arawaks by the Spanish. The third settlers to arrive in the 13th century were the Caribs, who were also named by the Spanish. The Caribs were more advanced as a culture and quickly asserted their authority as the rulers of Barbados over the previous settlers and remained in power for centuries.

The first Europeans to discover Barbados were the Portuguese, who were traveling on behalf of the Spanish Empire to capture slaves to be sold in other parts of the world. By 1541, the Spanish claimed there were no more Amerindians left to capture, believing they had either already been captured or had moved to more mountainous territory on other islands for better survival and protection.

The British reached the shores of Barbados in 1625, having spent the previous 25 years exploring North America and other Islands. The British established their settlement in 1625 in the name of King James I. In Barbados during the 1640's, sugar cane developed as the major industry in the country. The sugar cane crops were mass produced, with the Amerindians being forced to work as slaves on plantations which were built across the country. The Amerindians suffered greatly under British rule until slavery was eventually abolished in 1834. The Amerindians eventually gained their independence in 1966, when they hoisted the flag of Barbados for the first time, to mark their separation from the British colony.

In Plenty and In Time of Need

The Lord has been the people's guide
For past three hundred years.
With Him still on the people's side
We have no doubts or fears.
Upward and onward we shall go,
Inspired, exulting, free,
And greater will our nation grow
In strength and unity.

We offer free images of the Barbados Flag in four sizes (small, medium, large, and high resolution). These images are distributed royalty free for both personal and educational use and are ideal for use in projects and on websites. If you choose to use one of our images, attribution is appreciated, but not required.

The following html code snippets can be copied and pasted to add an image of the Barbados Flag to your website: