We carry authentic Azerbaijan Flags in both indoor and outdoor varieties. Our flags are proudly made in the United States from durable nylon and are printed with vibrant long-lasting inks. The Azerbaijan national flag is often displayed at embassies, outside of businesses associated with Azerbaijan, and at the homes of people who take great pride in their Azerbaijan heritage.

Our indoor flags are finished with a pole hem and your choice of with or without golden fringe. Gold fringe is the traditional way to display an indoor flag, however, some people choose without fringe for a simple and clean look that is also less expensive. If you are looking for a complete indoor presentation set, our Build Your Own Indoor International Flag Set program allows you to select a durable nylon indoor Azerbaijan Flag and choose between premium quality poles, bases, and ornaments, and tassel. For indoor applications, most buyers choose a 3ft. x 5ft. flag with an 8ft. pole, however, if you have a low ceiling, you may opt for a 7ft. pole, which is designed to work with drop ceilings. If you are looking for a very substantial international flag display, our 4ft. x 6ft. indoor flags can be paired with a 9ft. pole for our largest indoor display option.

Our outdoor international flags are finished with a canvas header and brass grommets and are offered in four sizes: 2ft. x 3ft., 3ft. x 5ft., 4ft. x 6ft., and 5ft. x 8ft., to fit any sized flagpole. Typically, outdoor flags are flown outside of government organizations, businesses, and institutions on in-ground and wall-mount flagpoles, however, some people also buy these flags to display their international pride at home. If you are looking for a wall-mount Azerbaijan flag set to display outside of your home, our Build Your Own Outdoor International Flag Set program will allow you to choose between premium quality 6ft. poles and brackets to display the Azerbaijan Flag on your front porch. Outdoor flags can also be displayed indoors on interior walls of your home with screws anchored in the wall to attach to the grommets. 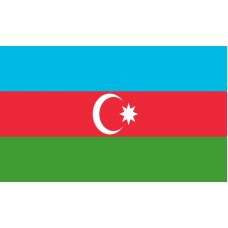 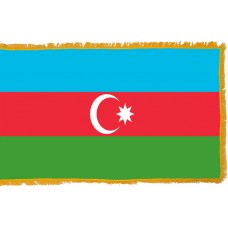 History of the Azerbaijan Flag

The Azerbaijan flag consists of 3 equal-sized horizontal bands of blue, red, and green. The center of the flag features a white crescent with an 8-pointed star in the middle. The blue color symbolizes the Turkic customs and legacy, the red color signifies the process of the country to establish itself as an independent nation, and the green color represents the nation's relationship with the Muslim world. The crescent and the star in the middle are Islamic emblems which signify the religious convictions of the people of Azerbaijan. Some historians believe that the 8-pointed star refers to the eight letters of the word Azerbaijan with reference to its spelling in Arabic.

After World War I, following the collapse of the Russian Empire, Azerbaijan declared its independence on May 28th, 1918. The Azerbaijan flag was officially adopted shortly after on November 9th, 1918. Azerbaijan's independence was very short-lived and two years later, the Soviet Union Red Army invaded and Azerbaijan became part of the Soviet Union as the "Azerbaijan Soviet Socialist Republic" (SSR). Azerbaijan remained a part of the Soviet Union for the next 70 years and utilized eight different flags during this period. During the Soviet period, the tricolor flag that had been adopted in 1918 was banned. In 1956, a protester named, Jahid Hilaloglu, raised the tricolor flag in the capital city of Baku as a symbol of defiance. Hilaloglu was sentenced to four years in prison for this act and was later placed in a mental home. During the late 1980s the flag was used frequently in demonstrations for the country's struggles for independence. This led to the 1918 tricolor flag being re-adopted on February 5th, 1991 and Azerbaijan finally gained independence on August 30th, 1991. The national tricolor flag holds great significance to the people of Azerbaijan as it recognizes their independence. The importance is highlighted by the fact that there are references to the flag in the National Anthem of Azerbaijan. In 2009, a new holiday called National Flag Day was created to celebrate the flag on November 9th each year. Azerbaijan is located in the Asian continent and shares borders with Russia, Georgia, Armenia and Iran. It was the first Muslim country to gain independence. It is referred to as the "Land of Fire," due to one of its most famous sites, the "Yanar Dag." At Yanar Dag, there is a natural glowing fire that is maintained and burns by the gases that seep underground. The capital of Azerbaijan is Baku, which is home to the "old city," a surviving medieval town that highlights Azerbaijan's rich history. Baku is also home to the Baku Museum of Miniature Books and "Little Venice." The Baku Museum of Miniature Books is the only museum of miniature books in the world, while "Little Venice," is a man-made waterway in Baku. In addition to Azerbaijan's deep cultural history, the country also boasts amazing natural formations including over 400 mud volcanoes, which is the most of any country in the world.

We offer free images of the Azerbaijan Flag in four sizes (small, medium, large, and high resolution). These images are distributed royalty free for both personal and educational use and are ideal for use in projects and on websites. If you choose to use one of our images, attribution is appreciated, but not required.

The following html code snippets can be copied and pasted to add an image of the Azerbaijan Flag to your website: