We carry authentic Gabon Flags in both indoor and outdoor varieties. Our flags are proudly made in the United States from durable nylon and are printed with vibrant long-lasting inks. The Gabon national flag is often displayed at embassies, outside of businesses associated with Gabon, and at the homes of people who take great pride in their Gabon heritage.

Our indoor flags are finished with a pole hem and your choice of with or without golden fringe. Gold fringe is the traditional way to display an indoor flag, however, some people choose without fringe for a simple and clean look that is also less expensive. If you are looking for a complete indoor presentation set, our Build Your Own Indoor International Flag Set program allows you to select a durable nylon indoor Gabon Flag and choose between premium quality poles, bases, and ornaments, and tassel. For indoor applications, most buyers choose a 3ft. x 5ft. flag with an 8ft. pole, however, if you have a low ceiling, you may opt for a 7ft. pole, which is designed to work with drop ceilings. If you are looking for a very substantial international flag display, our 4ft. x 6ft. indoor flags can be paired with a 9ft. pole for our largest indoor display option.

Our outdoor international flags are finished with a canvas header and brass grommets and are offered in four sizes: 2ft. x 3ft., 3ft. x 5ft., 4ft. x 6ft., and 5ft. x 8ft., to fit any sized flagpole. Typically, outdoor flags are flown outside of government organizations, businesses, and institutions on in-ground and wall-mount flagpoles, however, some people also buy these flags to display their international pride at home. If you are looking for a wall-mount Gabon flag set to display outside of your home, our Build Your Own Outdoor International Flag Set program will allow you to choose between premium quality 6ft. poles and brackets to display the Gabon Flag on your front porch. Outdoor flags can also be displayed indoors on interior walls of your home with screws anchored in the wall to attach to the grommets.

In addition to the flags we offer for purchase, we maintain an archive of the audio and lyrics of the Gabon National Anthem, historical information about the Gabon flag, demographic data about Gabon, and free high resolution images of the Gabon flag for use in projects and on websites. 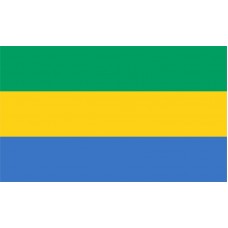 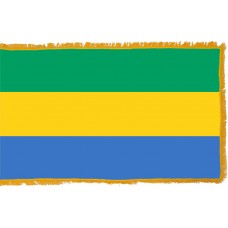 History of the Gabon Flag

The Gabon Flag features three horizontal bands, in the colors of green, yellow and blue. It was adopted in 1960, when the country received full independence. The first Gabon Flag that was adopted in 1959 used the existing colors of the flag today but the yellow band was thinner and the corner of the flag featured the French tricolor. On August 9th, 1960, the French flag was removed from the design and the yellow band was enlarged to make it equal in size to the green and blue bands. The yellow color of the Gabon flag represents the sun and the equator which runs through the country, the green color represents the agriculture and forests which make up the majority of the country, and the blue color represents the Atlantic Ocean that it lies on.

In 1958, following the decolonization movement in Africa, the French were obliged to grant limited self-governing freedom to Gabon but as part of the French community still. It was a year after this that Gabon adopted the first version of their flag.

Gabon is a country in Central Africa that is bordered by Equatorial Guinea, Cameroon, Republic of Congo, and the Gulf of Guinea. The capital and largest city of Gabon is "Libreville" which translates as "free city." It is thought that it was the slaves that had just been freed that discovered this city in 1849. Gabon is considered to be one of the more prosperous countries in Africa due to the oil and mineral reserves that make up the majority of the country's economy. Tourism in the country has been increasing over the years, with the majority of tourists visiting the country mainly to see the animals. Gabon is home to 80% of Africa’s gorilla population.

The majority of Gabon is covered by rainforests (80-85%). It is also home to some beautiful sights including the "Kongu Falls" which are the strongest-flowing waterfalls in the world. These are found in the Ivindo National Park on the Ivindo River. Gabon has 13 National Parks that were all established in 2002 and one of the popular parks (Loango National Park) is home to over 777 species of birds. Another popular attraction is the "L'eglise St. Michael" (Cathedral of St. Michael) which houses 31 wooden carved columns, each column depicting its own biblical scene and it is thought that all the columns were carved by a blind man. With its extensive range of forests, wildlife and endangered species as well as beautiful beaches and historical monuments, Gabon's economy is no longer just reliant on its oil, minerals and natural resources, tourism is now also having a big impact.

United in concord and brotherhood,
Awake, Gabon, dawn is at hand.
Stir up the spirit that thrills and inspires us!
At last we rise up to attain happiness.

Dazzling and proud, the sublime day dawns,
Dispelling for ever injustice and shame.
May it still advance and calm our fears,
May it promote virtue and banish warfare.

Yes, may the happy days of which our ancestors dreamed
Come for us at last, rejoicing our hearts,
And banish the sorcerers, those perfidious deceivers
Who sowed poison and spread fear.

So that, in the eyes of the world and of friendly nations,
The immortal Gabon may maintain her good repute,
Let us forget our quarrels, let us build together
The new structure of which we all have dreamed.

From the shores of the Ocean to the heart of the forest,
Let us remain vigilant, without weakness and without hatred!
Around this flag which leads us to honour,
Let us salute the Fatherland and ever sing!

We offer free images of the Gabon Flag in four sizes (small, medium, large, and high resolution). These images are distributed royalty free for both personal and educational use and are ideal for use in projects and on websites. If you choose to use one of our images, attribution is appreciated, but not required.

The following html code snippets can be copied and pasted to add an image of the Gabon Flag to your website: