We carry authentic Canada Flags in both indoor and outdoor varieties. Our flags are proudly made in the United States from durable nylon and are printed with vibrant long-lasting inks. The Canada national flag is often displayed at embassies, outside of businesses associated with Canada, and at the homes of people who take great pride in their Canadian heritage.

Our indoor flags are finished with a pole hem and your choice of with or without golden fringe. Gold fringe is the traditional way to display an indoor flag, however, some people choose without fringe for a simple and clean look that is also less expensive. If you are looking for a complete indoor presentation set, our Build Your Own Indoor International Flag Set program allows you to select a durable nylon indoor Canada Flag and choose between premium quality poles, bases, and ornaments, and tassel. For indoor applications, most buyers choose a 3ft. x 5ft. flag with an 8ft. pole, however, if you have a low ceiling, you may opt for a 7ft. pole, which is designed to work with drop ceilings. If you are looking for a very substantial international flag display, our 4ft. x 6ft. indoor flags can be paired with a 9ft. pole for our largest indoor display option.

Our outdoor international flags are finished with a canvas header and brass grommets and are offered in four sizes: 2ft. x 3ft., 3ft. x 5ft., 4ft. x 6ft., and 5ft. x 8ft., to fit any sized flagpole. Typically, outdoor flags are flown outside of government organizations, businesses, and institutions on in-ground and wall-mount flagpoles, however, some people also buy these flags to display their international pride at home. If you are looking for a wall-mount Canada flag set to display outside of your home, our Build Your Own Outdoor International Flag Set program will allow you to choose between premium quality 6ft. poles and brackets to display the Canada Flag on your front porch. Outdoor flags can also be displayed indoors on interior walls of your home with screws anchored in the wall to attach to the grommets.

In addition to the flags we offer for purchase, we maintain an archive of the audio and lyrics of the Canada National Anthem, historical information about the Canada flag, demographic data about Canada, and free high resolution images of the Canada flag for use in projects and on websites. 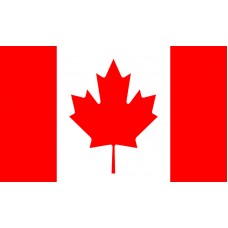 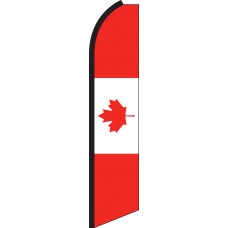 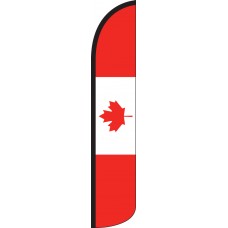 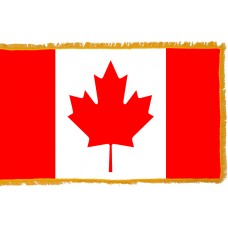 History of the Canadian Flag

The Canadian flag consists of three bands of color: red, white, red. The central white square takes up 50% of the width of the flag and two red rectangles on either side take up 25% of the width of the flag each. The central feature of the flag is a red maple leaf in the center of the white square. The red color represents the English cross of St. George and the white color is symbolic of the French Royal Emblem. In 1921, King George V made Red and white have been the official colors of Canada. The 11-pointed maple leaf was designed by George Stanley and has been a national emblem of Canada since 1868, when it was used on the coat of arms.

The Canadian Flag was adopted on February 15th, 1965 and is often referred to as "The Maple Leaf" or "L'unifolie," which translates as "one-leafed" in French. In 1763, Canada became a British colony and from this period until they adopted their own flag, the Union Jack was flown in Canada. Even when Canada gained independence from Britain in 1931, the Union Jack was still used. In 1964, the Prime Minister announced that Canada should have its own flag, which sparked a debate that resulted in the creation of a new flag.

The flag was raised for the first time on Parliament Hill in Ottawa. On February 15th each year, national flag day is celebrated. From the 16th century, both the British and the French established colonies in Canada and land disputes between the countries led to four wars between 1689-1763. As they were a British colony, Canada was also involved both in World War I and World War II as British allies.

Canada officially became a country on July 1st, 1867 when the British North America Act was passed. Canada is located in North America and is the second largest country in the world by geographical area. Its capital city is Ottawa and it has 10 provinces and 3 territories. Canada boasts the longest land border with America as well as the longest coastline in the world. It has more lakes than anywhere else in the world with Ontario having over 250,000 lakes on its own. The lakes in Canada make up 1/5 of the world's freshwater lakes. It is also home to many beautiful and fantastic sights, such as the Rocky Mountains, Montreal and Quebec (amongst many others), which has made it one of the most popular tourist destinations in the world. The Niagara Falls (largest waterfalls in Canada) is the most popular attraction that Canada has with thousands of tourists visiting each year.

Another very famous landmark is Toronto's CN Tower, which is one of the tallest structures in the world as well as Yonge Street, which is the longest street in the world at 1896km. The weather in Canada is generally cold. The average daily temperature is minus 5.6 degrees centigrade and the lowest temperature ever recorded was in Canada: a whopping minus 63 degrees centigrade, which was recorded in a village called Snag in Yukon in 1947.

We offer free images of the Canada Flag in four sizes (small, medium, large, and high resolution). These images are distributed royalty free for both personal and educational use and are ideal for use in projects and on websites. If you choose to use one of our images, attribution is appreciated, but not required.

The following html code snippets can be copied and pasted to add an image of the Canada Flag to your website: