We carry authentic Serbia Flags in both indoor and outdoor varieties. Our flags are proudly made in the United States from durable nylon and are printed with vibrant long-lasting inks. The Serbia national flag is often displayed at embassies, outside of businesses associated with Serbia, and at the homes of people who take great pride in their Serbian heritage.

Our indoor flags are finished with a pole hem and your choice of with or without golden fringe. Gold fringe is the traditional way to display an indoor flag, however, some people choose without fringe for a simple and clean look that is also less expensive. If you are looking for a complete indoor presentation set, our Build Your Own Indoor International Flag Set program allows you to select a durable nylon indoor Serbia Flag and choose between premium quality poles, bases, and ornaments, and tassel. For indoor applications, most buyers choose a 3ft. x 5ft. flag with an 8ft. pole, however, if you have a low ceiling, you may opt for a 7ft. pole, which is designed to work with drop ceilings. If you are looking for a very substantial international flag display, our 4ft. x 6ft. indoor flags can be paired with a 9ft. pole for our largest indoor display option.

Our outdoor international flags are finished with a canvas header and brass grommets and are offered in four sizes: 2ft. x 3ft., 3ft. x 5ft., 4ft. x 6ft., and 5ft. x 8ft., to fit any sized flagpole. Typically, outdoor flags are flown outside of government organizations, businesses, and institutions on in-ground and wall-mount flagpoles, however, some people also buy these flags to display their international pride at home. If you are looking for a wall-mount Serbia flag set to display outside of your home, our Build Your Own Outdoor International Flag Set program will allow you to choose between premium quality 6ft. poles and brackets to display the Serbia Flag on your front porch. Outdoor flags can also be displayed indoors on interior walls of your home with screws anchored in the wall to attach to the grommets.

In addition to the flags we offer for purchase, we maintain an archive of the audio and lyrics of the Serbia National Anthem, historical information about the Serbia flag, demographic data about Serbia, and free high resolution images of the Serbia flag for use in projects and on websites. 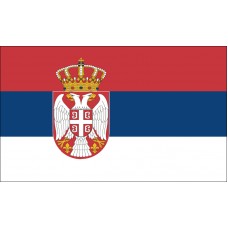 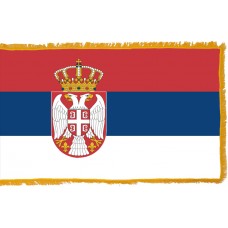 History of the Serbian Flag

The Serbia Flag features three horizontal bands in the colors of red, blue, and white. Towards the left side of the flag, the Serbia coat of arms is displayed. The Coat of arms features a two-headed eagle on a red shield (that has a crown on top) and on the eagle, is a smaller red shield that is divided into quarters by a white cross. In each quarter of the shield is the Cyrillic letter "C." The letters together mean "Samo Sloga Srbina Spasava" which translates as "only unity will save the Serbs."

Serbia is a landlocked country that is located in Southeastern Europe and shares borders with Hungary, Romania, Bulgaria, Macedonia, Croatia, Bosnia, and Herzegovina, Montenegro, and Albania. Its capital and largest city is called Belgrade which is also one of the oldest cities in Europe.

Serbia (which translates as "Land of the Serbs") is a country that has had a history of foreign invasions and ownerships. In 1389, following the "Battle of Kosovo" when the Turks beat Serbia, Serbia was under the control of the Ottoman Empire for almost 500 years. It became an independent state in 1878, following the Russo-Turkish war when Russia defeated the Ottomans. During WWI, in 1915, the Germans invaded Serbia with the help of Austrian and Bulgarian forces and in 1918, following the war, Croatia, Slovenia, Bosnia and Herzegovina, Vojvodina, Serbia, Kosovo, Montenegro, and Macedonia joined together and formed the "Kingdom of Serbs, Croats, and Slovenes."

In 1929, this became known as "Yugoslavia." From 1918, the Kingdom of Serbs, Croats, and Slovenes was ruled under a monarchy until it was overthrown in 1945. During WWII, the Germans, once again, invaded and captured Belgrade. During this period, concentration camps for Jews were organized and approximately 40,000 were killed.

During WWII, Yugoslavia lost approximately 1,700,000 people which makes it one of the countries that suffered the greatest losses. In 1992, the Federal Republic of Yugoslavia collapsed due to a number of wars following independence declarations by Slovenia, Croatia, Bosnia and Herzegovina and on April 28th, 1992, Serbia and Montenegro formed to create the new republic until June 3rd, 2006 when Montenegro declared independence followed by Serbia declaring independence on June 5th, 2006. This was the first time Serbia used its name since 1918.

God of Justice; Thou who saved us
when in deepest bondage cast,
Hear Thy Serbian children's voices,
Be our help as in the past.

With Thy mighty hand sustain us,
Still our rugged pathway trace;
God, our hope; protect and cherish
Serbian lands and Serbian race!

Bind in closest links our kindred
Teach the love that will not fail,
May the loathed fiend of discord
Never in our ranks prevail.

Let the golden fruits of union
Our young tree of freedom grace;
God, our Master! guide and prosper
Serbian lands and Serbian race!

Lord! Avert from us Thy vengeance,
Thunder of Thy dreaded ire;
Bless each Serbian town and hamlet,
Mountain, meadow, heart and spire.

When our host goes forth to battle
Death or victory to embrace-
God of armies! be our leader
Strengthen then the Serbian race!

On our sepulchre of ages
Breaks the resurrection morn,
From the slough of direst slavery
Serbia anew is born.

Through five hundred years of durance
We have knelt before Thy face,
All our kin, O God! deliver,
Thus entreats the Serbian race!

We offer free images of the Serbia Flag in four sizes (small, medium, large, and high resolution). These images are distributed royalty free for both personal and educational use and are ideal for use in projects and on websites. If you choose to use one of our images, attribution is appreciated, but not required.

The following html code snippets can be copied and pasted to add an image of the Serbia Flag to your website: