We carry authentic France Flags in both indoor and outdoor varieties. Our flags are proudly made in the United States from durable nylon and are printed with vibrant long-lasting inks. The France national flag is often displayed at embassies, outside of businesses associated with France, and at the homes of people who take great pride in their French heritage.

Our indoor flags are finished with a pole hem and your choice of with or without golden fringe. Gold fringe is the traditional way to display an indoor flag, however, some people choose without fringe for a simple and clean look that is also less expensive. If you are looking for a complete indoor presentation set, our Build Your Own Indoor International Flag Set program allows you to select a durable nylon indoor France Flag and choose between premium quality poles, bases, and ornaments, and tassel. For indoor applications, most buyers choose a 3ft. x 5ft. flag with an 8ft. pole, however, if you have a low ceiling, you may opt for a 7ft. pole, which is designed to work with drop ceilings. If you are looking for a very substantial international flag display, our 4ft. x 6ft. indoor flags can be paired with a 9ft. pole for our largest indoor display option.

Our outdoor international flags are finished with a canvas header and brass grommets and are offered in four sizes: 2ft. x 3ft., 3ft. x 5ft., 4ft. x 6ft., and 5ft. x 8ft., to fit any sized flagpole. Typically, outdoor flags are flown outside of government organizations, businesses, and institutions on in-ground and wall-mount flagpoles, however, some people also buy these flags to display their international pride at home. If you are looking for a wall-mount France flag set to display outside of your home, our Build Your Own Outdoor International Flag Set program will allow you to choose between premium quality 6ft. poles and brackets to display the France Flag on your front porch. Outdoor flags can also be displayed indoors on interior walls of your home with screws anchored in the wall to attach to the grommets.

In addition to the flags we offer for purchase, we maintain an archive of the audio and lyrics of the France National Anthem, historical information about the France flag, demographic data about France, and free high resolution images of the France flag for use in projects and on websites. 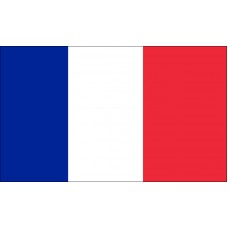 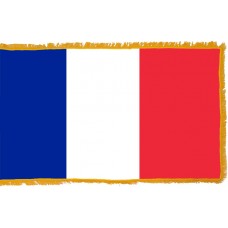 History of the French Flag

The French flag was adopted on February 15th, 1794 and consists of three vertical bands in the colors of blue, white, and red. The colors represent many different things and are very symbolic of French history. The meaning of the French flag is "liberte, egalitie, fraternite" which translates as "liberty, equality, fraternity." During the French Revolution, this is what the people of France were aiming to achieve. The Red and blue colors that are used on the flag are known as the colors of Paris and the white color represents the Bourbon Monarchy.

Prior to the tricolor flag that is used today, the French flag was just plain white (representing purity). The French Flag is also referred to as "Le Drapeau Tricolore" and the three colors used were incorporated into the flag during the French Revolution. During the war, the army wore red and blue rosettes (which were the colors on the French coat of arms at the time) and in 1789, the national guard commander, Marie Joseph Yves Gilbert du Motier designed a different rosette using the colors blue, white, and red. It is thought that this was the first time the three colors were used as an emblem.

For thousands of years, France was ruled by a monarch until 1789 and the French Revolution. In the years that France was ruled by the monarchy, many people lived in poverty due to the taxes being so high, meaning that the royals were very rich. In 1789, the people of France opposed the monarchy and on July 14th, 1789, they invaded Bastille Prison to release all the prisoners who were imprisoned for not paying their taxes.

This was the beginning of the tragic French Revolution, where over one million people lost their lives. July 14th is still celebrated in France and is known as Bastille Day and their day of liberation. Following the French Revolution, the monarchy no longer existed and France embraced their democratic country until it was conquered by Napoleon Bonaparte who claimed himself Emperor of France in 1799.

Napoleon began many wars with neighboring countries until his defeat at the battle of Waterloo in 1815. Following Napoleon's defeat in 1815, the Bourbon monarch ruled the country and the flag was changed to a white flag featuring the Bourbon coat of arms until the tricolor flag was once again adopted in 1830 by Louis-Phillippe.

France is the largest country in Western Europe and is bordered by Andorra, Belgium, Germany, Italy, Spain, Luxembourg, Monaco, and Switzerland. It is the most visited country in the world with over 80 million visitors a year and it is home to some of the most recognized structures and monuments in the world, which include, The Eiffel Tower, The Louvre Museum (most visited museum) and Arc De Triomphe, which was built in tribute to those that lost their lives during the French Revolution.

The Song of Marseille (La Marseillaise)

Ye sons of France, awake to glory,
Hark, hark! what myriads bid you rise!
Your children, wives and white-haired grandsires.
Behold their tears and hear their cries! (repeat)
Shall hateful tyrants, mischiefs breeding,
With hireling hosts, a ruffian band,
Affright and desolate the land,
While peace and liberty lie bleeding?

To arms, to arms, ye brave!
The avenging sword unsheath,
March on, march on!
All hearts resolv'd
On victory or death!

Now, now, the dangerous storm is rolling
Which treacherous kings confederate raise!
The dogs of war, let loose, are howling,
And lo! our fields and cities blaze! (repeat)
alt: And lo! our homes will soon invade!
And shall we basely view the ruin
While lawless force with guilty stride
Spreads desolation far and wide
With crimes and blood his hands embruing?

With luxury and pride surrounded
The vile insatiate despots dare,
Their thirst of power and gold unbounded,
To mete and vend the light and air! (repeat)
Like beasts of burden would they load us,
Like gods would bid their slaves adore,
But man is man, and who is more?
Then shall they longer lash and goad us?

O Liberty, can man resign thee
Once having felt thy generous flame?
Can dungeons, bolts or bars confine thee
Or whips thy noble spirit tame? (repeat)
Too long the world has wept, bewailing
That falsehood's dagger tyrants wield,
But freedom is our sword and shield,
And all their arts are unavailing.

We offer free images of the France Flag in four sizes (small, medium, large, and high resolution). These images are distributed royalty free for both personal and educational use and are ideal for use in projects and on websites. If you choose to use one of our images, attribution is appreciated, but not required.

The following html code snippets can be copied and pasted to add an image of the France Flag to your website: