We carry authentic Nicaragua Flags in both indoor and outdoor varieties. Our flags are proudly made in the United States from durable nylon and are printed with vibrant long-lasting inks. The Nicaragua national flag is often displayed at embassies, outside of businesses associated with Nicaragua, and at the homes of people who take great pride in their Nicaragua heritage.

Our indoor flags are finished with a pole hem and your choice of with or without golden fringe. Gold fringe is the traditional way to display an indoor flag, however, some people choose without fringe for a simple and clean look that is also less expensive. If you are looking for a complete indoor presentation set, our Build Your Own Indoor International Flag Set program allows you to select a durable nylon indoor Nicaragua Flag and choose between premium quality poles, bases, and ornaments, and tassel. For indoor applications, most buyers choose a 3ft. x 5ft. flag with an 8ft. pole, however, if you have a low ceiling, you may opt for a 7ft. pole, which is designed to work with drop ceilings. If you are looking for a very substantial international flag display, our 4ft. x 6ft. indoor flags can be paired with a 9ft. pole for our largest indoor display option.

Our outdoor international flags are finished with a canvas header and brass grommets and are offered in four sizes: 2ft. x 3ft., 3ft. x 5ft., 4ft. x 6ft., and 5ft. x 8ft., to fit any sized flagpole. Typically, outdoor flags are flown outside of government organizations, businesses, and institutions on in-ground and wall-mount flagpoles, however, some people also buy these flags to display their international pride at home. If you are looking for a wall-mount Nicaragua flag set to display outside of your home, our Build Your Own Outdoor International Flag Set program will allow you to choose between premium quality 6ft. poles and brackets to display the Nicaragua Flag on your front porch. Outdoor flags can also be displayed indoors on interior walls of your home with screws anchored in the wall to attach to the grommets. 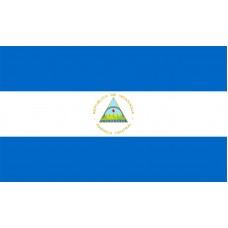 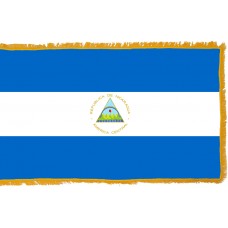 History of the Nicaragua Flag

The Nicaragua flag consists of a blue background with a central horizontal white stripe. In the center of the flag is the official name of the country, set in a circular fashion with "Republica de Nicaragua" making up the top half of the circle and "America Central" making up the bottom half. Within the circle of text is the coat of arms of Nicaragua, consisting of a triangular frame and featuring volcanoes, the rising sun, a rainbow, and the cap of liberty.

The Nicaragua flag was first used in the early 20th century, but it wasn't made the official flag of the country until over 60 years later in 1971. The design of the flag is based on those used by the United Provinces of Central America, a group of five states that existed in the early part of the 19th century that was made up of Guatemala, El Salvador, Honduras, Costa Rica, and Nicaragua.

Nicaragua has been plagued by political unrest over the last two hundred years. Formerly part of the Spanish Empire until 1821, its independence and capital city, Managua, has been plagued by political and military leaders, brutal dictatorships and prolonged financial crisis. The issues resulted in an uprising and the Nicaraguan Revolution lasted from the 1960's until 1990, when Violetta Chamorro became the first democratically elected President.

Nicaragua's location in the center of the America's means it has one of the most bio diverse environments in the world. Bordered by the Atlantic Ocean to the east and the Pacific Ocean to the west, and with an abundance of forests, Nicaragua has the second largest rainforest in the Americas. Twenty percent of the country is designated as protected land, and as well as a plethora of stunning flora and fauna the country has thousands of species of animals, mammals, amphibians, reptiles, and fish. The government is a keen protector of its animal population and due to declining numbers, it has banned the fishing of its famous Nicaraguan Shark, a bull shark known to occupy Nicaragua's freshwater lakes.

Tourism has become an essential part of the Nicaraguan economy in the last twenty years and has greatly benefited the government and its people by bringing financial gains to the construction and agricultural industries, along with a positive effect on the commercial business in tourist hot spots.

The rich history of the country has led to various areas of differing culture. Along the Pacific coast the culture is based heavily on Spanish traditions of folklore, music, and religion, mixed with many native influences. On the opposite side of the country on the Caribbean Coast, English is widely spoken, which is attributed to it's past as a British Protectorate. Many of the residents have retained their original indigenous identities and speak their native languages as their first language.

Hail to thee, Nicaragua! On thy land
roars the voice of the cannon no more,
nor does the blood of brothers now stain
thy glorious bicolor banner.

Let peace shine beautiful in thy sky,
and nothing dim thine immortal glory,
for work is thy well earned laurel
and honor is thy triumphal emblem!

We offer free images of the Nicaragua Flag in four sizes (small, medium, large, and high resolution). These images are distributed royalty free for both personal and educational use and are ideal for use in projects and on websites. If you choose to use one of our images, attribution is appreciated, but not required.

The following html code snippets can be copied and pasted to add an image of the Nicaragua Flag to your website: