We carry authentic United Nations Flags in both indoor and outdoor varieties. Our flags are proudly made in the United States from durable nylon and are printed with vibrant long-lasting inks.

Our indoor flags are finished with a pole hem and your choice of with or without golden fringe. Gold fringe is the traditional way to display an indoor flag, however, some people choose without fringe for a simple and clean look that is also less expensive. If you are looking for a complete indoor presentation set, our Build Your Own Indoor International Flag Set program allows you to select a durable nylon indoor United Nations Flag and choose between premium quality poles, bases, and ornaments, and tassel. For indoor applications, most buyers choose a 3ft. x 5ft. flag with an 8ft. pole, however, if you have a low ceiling, you may opt for a 7ft. pole, which is designed to work with drop ceilings. If you are looking for a very substantial flag display, our 4ft. x 6ft. indoor flags can be paired with a 9ft. pole for our largest indoor display option.

Our outdoor flags are finished with a canvas header and brass grommets and are offered in four sizes: 2ft. x 3ft., 3ft. x 5ft., 4ft. x 6ft., and 5ft. x 8ft., to fit any sized flagpole. Typically, outdoor flags are flown outside of government organizations. If you are looking for a wall-mount United Nations flag set, our Build Your Own Outdoor International Flag Set program will allow you to choose between premium quality 6ft. poles and brackets to display the United Nations Flag on your front porch. Outdoor flags can also be displayed indoors on interior walls of your home with screws anchored in the wall to attach to the grommets. 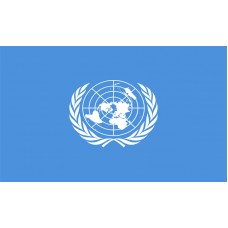 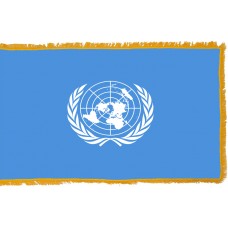 History of the United Nations Flag

At the end of WWI, the "League of Nations" was formed by various countries to keep the peace. There were still countries, however, that preferred to go to war to solve the differences, such as, Germany, Japan, and Italy, and due to this, the league failed. During WWII, the Allied Powers called themselves the United Nations, and when they gained victory they formed the organization, which originally began with 51-member nations and now has 193 member nations. The United Nations has six principal organs which are, United Nations General Assembly (they decide on the admission of new nations as well as being the deliberative assembly of all the members), United Nations Secretariat (the administrative body of the United Nations who prepares reports, budgets etc. and supports the other nation members), The International Court of Justice (the universal court for the international laws that can decide on conflicts with member states), United Nations Security Council (responsible for maintaining the peace and the security internationally and is considered the most important "organ"), United Nations Economic and Social Council (this deals with the economic and social issues, such as standard of living, education, health issues, human rights etc. between the members), and the United Nations Trusteeship Council which has been inactive since 1994 but was originally formed to deal with colonial possessions. Any decisions that are made between the nations have to be agreed by the General Assembly.

We offer free images of the United Nations Flag in four sizes (small, medium, large, and high resolution). These images are distributed royalty free for both personal and educational use and are ideal for use in projects and on websites. If you choose to use one of our images, attribution is appreciated, but not required.

The following html code snippets can be copied and pasted to add an image of the United Nations Flag to your website: