We carry authentic Belarus Flags in both indoor and outdoor varieties. Our flags are proudly made in the United States from durable nylon and are printed with vibrant long-lasting inks. The Belarus national flag is often displayed at embassies, outside of businesses associated with Belarus, and at the homes of people who take great pride in their Belarus heritage.

Our indoor flags are finished with a pole hem and your choice of with or without golden fringe. Gold fringe is the traditional way to display an indoor flag, however, some people choose without fringe for a simple and clean look that is also less expensive. If you are looking for a complete indoor presentation set, our Build Your Own Indoor International Flag Set program allows you to select a durable nylon indoor Belarus Flag and choose between premium quality poles, bases, and ornaments, and tassel. For indoor applications, most buyers choose a 3ft. x 5ft. flag with an 8ft. pole, however, if you have a low ceiling, you may opt for a 7ft. pole, which is designed to work with drop ceilings. If you are looking for a very substantial international flag display, our 4ft. x 6ft. indoor flags can be paired with a 9ft. pole for our largest indoor display option.

Our outdoor international flags are finished with a canvas header and brass grommets and are offered in four sizes: 2ft. x 3ft., 3ft. x 5ft., 4ft. x 6ft., and 5ft. x 8ft., to fit any sized flagpole. Typically, outdoor flags are flown outside of government organizations, businesses, and institutions on in-ground and wall-mount flagpoles, however, some people also buy these flags to display their international pride at home. If you are looking for a wall-mount Belarus flag set to display outside of your home, our Build Your Own Outdoor International Flag Set program will allow you to choose between premium quality 6ft. poles and brackets to display the Belarus Flag on your front porch. Outdoor flags can also be displayed indoors on interior walls of your home with screws anchored in the wall to attach to the grommets.

In addition to the flags we offer for purchase, we maintain an archive of the audio and lyrics of the Belarus National Anthem, historical information about the Belarus flag, demographic data about Belarus, and free high resolution images of the Belarus flag for use in projects and on websites. 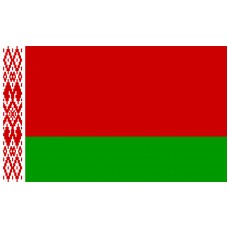 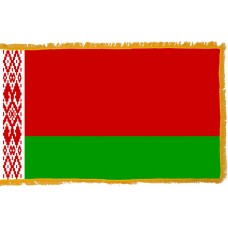 History of the Belarus Flag

The National flag of Belarus features a design comprised of two horizontal stripes. The top stripe is red and the bottom is green, with the red stripe taking up twice the space of the green stripe. The left side of the flag features a red and white pattern running down the side. The flag was originally adopted with a thinner pattern than it has now on June 7th, 1995 following a national referendum in May of that year. Since February 10th, 2012 it has been replaced with a slightly thicker pattern. Independence from the Soviet Union on July 27th, 1990 had been a natural consequence of the break-up of the Soviet Union. The new flag remained similar to what it was in Soviet Union days except that the hammer and sickle symbols of communism were removed.

The Soviet Union Flag with the hammer and sickle symbols had been established in 1951. Before that the country had had a number of different flags. A solid red design was used in 1919 when the Lithanian-Bellarusian SSRB was formed and three variations of it with the lettering, "ССРБ" were implemented between 1919 and 1951. Before that Belarus used a white flag with a red horizontal stripe in the middle, which was temporarily re-adopted in 1918 and then again between 1991 to 1995.

Belarus is a landlocked country, slightly smaller than the size of the UK and is bordered by Russia, the Ukraine, Poland, Lithuania and Latvia. The history of the Belarussian people began sometime between the 6th and 8th centuries AD with the migration of the Slavic people throughout Eastern Europe. The East Slavs settled in Russia, Ukraine and Belarus. To this day, there is a strong similarity between the languages spoken in these three countries, since they all evolved from the Ruthenian language, which was spoken by the East Slavs during the 13th to 17th centuries. According to a 2009 study carried out by the Belarus government, only about 12% of the current population speaks Bellarusian at home, with the majority of the population speaking Russian.

The Bellarusians have a history fraught with difficulties; Through the 16th and 17th centuries, the leadership of the country limited the freedoms of serfs and steadily increased taxation over time. Moreover, there was a religious conflict in the country, when the rulers sought to impose Catholicism upon the common people who predominately practiced Eastern Orthodox. These pressures on the poorer classes of society caused many of them to flee to remote areas. Later in the country's history, The Communist revolution of 1917, World War II, and the Chernobyl disaster also hit the people of Belarus very hard. At the beginning of this millennium about 20% of Belarus was still radioactively contaminated, and as a result, the country has suffered a very high incidence of cancer. Although the Soviet Union has formally ceased, Belarus continues to have strong trade and cultural ties with Russia.

Republic in name, although in fact a dictatorship

We, Belarusians, are peaceful people,
Wholeheartedly devoted to our Motherland.
We are faithful friends, growing up and
Living in a hardworking and independent family.

Glory to the blessed name of our land!
Glory to the brotherly union of people!
Live long and prosper,
Our beloved Motherland Belarus!

Together with our brothers, for centuries we
Courageously defended our homes threshold.
We won our banners of victory
In battles for freedom and our lot!

Peoples friendship is peoples strength and
Our sacred sunlit way.
Fly proudly in the clear skies,
The banner of victory, the banner of sunshine!

We offer free images of the Belarus Flag in four sizes (small, medium, large, and high resolution). These images are distributed royalty free for both personal and educational use and are ideal for use in projects and on websites. If you choose to use one of our images, attribution is appreciated, but not required.

The following html code snippets can be copied and pasted to add an image of the Belarus Flag to your website: