We carry authentic Togo Flags in both indoor and outdoor varieties. Our flags are proudly made in the United States from durable nylon and are printed with vibrant long-lasting inks. The Togo national flag is often displayed at embassies, outside of businesses associated with Togo, and at the homes of people who take great pride in their Togo heritage.

Our indoor flags are finished with a pole hem and your choice of with or without golden fringe. Gold fringe is the traditional way to display an indoor flag, however, some people choose without fringe for a simple and clean look that is also less expensive. If you are looking for a complete indoor presentation set, our Build Your Own Indoor International Flag Set program allows you to select a durable nylon indoor Togo Flag and choose between premium quality poles, bases, and ornaments, and tassel. For indoor applications, most buyers choose a 3ft. x 5ft. flag with an 8ft. pole, however, if you have a low ceiling, you may opt for a 7ft. pole, which is designed to work with drop ceilings. If you are looking for a very substantial international flag display, our 4ft. x 6ft. indoor flags can be paired with a 9ft. pole for our largest indoor display option.

Our outdoor international flags are finished with a canvas header and brass grommets and are offered in four sizes: 2ft. x 3ft., 3ft. x 5ft., 4ft. x 6ft., and 5ft. x 8ft., to fit any sized flagpole. Typically, outdoor flags are flown outside of government organizations, businesses, and institutions on in-ground and wall-mount flagpoles, however, some people also buy these flags to display their international pride at home. If you are looking for a wall-mount Togo flag set to display outside of your home, our Build Your Own Outdoor International Flag Set program will allow you to choose between premium quality 6ft. poles and brackets to display the Togo Flag on your front porch. Outdoor flags can also be displayed indoors on interior walls of your home with screws anchored in the wall to attach to the grommets.

In addition to the flags we offer for purchase, we maintain an archive of the audio and lyrics of the Togo National Anthem, historical information about the Togo flag, demographic data about Togo, and free high resolution images of the Togo flag for use in projects and on websites. 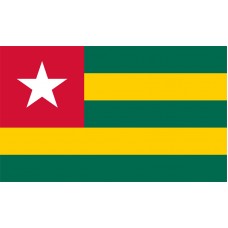 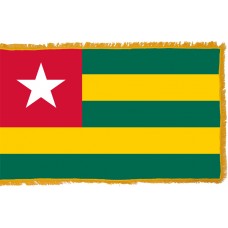 History of the Togo Flag

The flag uses the Pan-African colors of Ethiopia and it is the only national flag that uses the artistic concept of "the golden rectangle" or "golden ratio." The Togo flag was designed by one of the greatest African artists called Paul Ahyi and it was officially adopted on April 28th, 1960.

Togo is a country that is located in Western Africa and shares borders with Ghana, Benin, Burkina Faso, and the Gulf of Guinea. The official name of Togo is "Togolese Republic" but it was also known as the "slave coast" between the 16th-18th centuries as many Europeans would come here and to the surrounding islands in search of slaves and they would be shipped from here to Europe and the Americas until slavery was abolished in the 19th century. Even though the Portuguese were the first to arrive in the 15th century, they never settled.

Between the 11th – 16th century, many different tribes passed through Togo, which include, Ewe tribe (who form the major ethnic group), Mina tribe, Tem tribe, Tchamba tribe, and Kabre tribe. In the Ewe language, Togo translates as "house of sea." In 1884, Togo became a German protectorate, and was known as "Togoland." During WW1, Great Britain and the French invaded and managed to capture Togoland. It was divided between Britain and France and the French gained control of Togo, whilst the British gained control of Ghana. Togo gained independence on April 27th, 1960.

Togo is one of the smallest countries in Africa, and is rated is one of the fifty most undeveloped countries in the world. The majority of the country's income and economy is based around the country's rich agriculture and resources, such as phosphate, cocoa beans, coffee, and the most important cash crop which is cotton. As it is such a small country, it doesn't attract as many tourists as there are very few attractions. The main attraction in Togo is the "Koutammouk" which is known to be the "land of the Batanmariba" (the Tammari people), and is an area that consists of the traditional mud-tower houses that the people choose to reside in. The Fazao Mafakassa National Park is the other main attraction and the largest national park that Togo is home to.

Hail to thee, land of our forefathers,
Thou who made them strong, peaceful and happy,
Men who for posterity cultivated virtue and bravery.
Even if tyrants shall come, thy heart yearns towards freedom.
Togo arise! Let us struggle without faltering.
Victory or death, but dignity.
God almighty, Thou alone hast made Togo prosper.
People of Togo arise! Let us build the nation.

To serve thee in unity is the most burning desire of our hearts.
Let us shout aloud our motto
That nothing can tarnish.
We the only builders of thy happiness and of thy future,
Everywhere let us break chains and treachery,
And we swear to thee for ever faith, love, service, untiring zeal,
To make thee yet, beloved Togo, a golden example for humanity.

Hail, hail to the entire Universe
Let us unite our efforts on this immense building site
Whence will be reborn anew
Great Humanity.
Everywhere, instead of misery, let us bring happiness.
Let us chase from the world unruly hatred.
It's over with slavery and Captivity.
At the star of liberty,
Let us renew the solidarity
Of the Nations in fraternity.

We offer free images of the Togo Flag in four sizes (small, medium, large, and high resolution). These images are distributed royalty free for both personal and educational use and are ideal for use in projects and on websites. If you choose to use one of our images, attribution is appreciated, but not required.

The following html code snippets can be copied and pasted to add an image of the Togo Flag to your website: