We carry authentic Maldives Flags in both indoor and outdoor varieties. Our flags are proudly made in the United States from durable nylon and are printed with vibrant long-lasting inks. The Maldives national flag is often displayed at embassies, outside of businesses associated with Maldives, and at the homes of people who take great pride in their Maldives heritage.

Our indoor flags are finished with a pole hem and your choice of with or without golden fringe. Gold fringe is the traditional way to display an indoor flag, however, some people choose without fringe for a simple and clean look that is also less expensive. If you are looking for a complete indoor presentation set, our Build Your Own Indoor International Flag Set program allows you to select a durable nylon indoor Maldives Flag and choose between premium quality poles, bases, and ornaments, and tassel. For indoor applications, most buyers choose a 3ft. x 5ft. flag with an 8ft. pole, however, if you have a low ceiling, you may opt for a 7ft. pole, which is designed to work with drop ceilings. If you are looking for a very substantial international flag display, our 4ft. x 6ft. indoor flags can be paired with a 9ft. pole for our largest indoor display option.

Our outdoor international flags are finished with a canvas header and brass grommets and are offered in four sizes: 2ft. x 3ft., 3ft. x 5ft., 4ft. x 6ft., and 5ft. x 8ft., to fit any sized flagpole. Typically, outdoor flags are flown outside of government organizations, businesses, and institutions on in-ground and wall-mount flagpoles, however, some people also buy these flags to display their international pride at home. If you are looking for a wall-mount Maldives flag set to display outside of your home, our Build Your Own Outdoor International Flag Set program will allow you to choose between premium quality 6ft. poles and brackets to display the Maldives Flag on your front porch. Outdoor flags can also be displayed indoors on interior walls of your home with screws anchored in the wall to attach to the grommets. 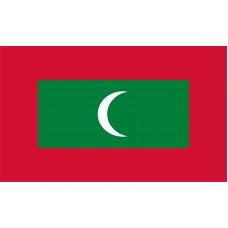 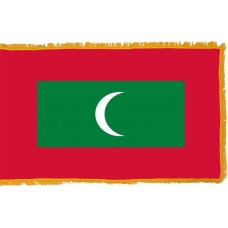 History of the Maldives Flag

The Maldives Flag consists of a red field with a large green rectangle in the center. In the center of the green rectangle is a white crescent. The red color represents the bravery of the heroes of the country and the sacrifices and bloodshed for the country and it was also the color of the first Maldives flag. The green color represents the peace and hope of the country as well as the many palm trees that cannot be found anywhere else. The white crescent represents Islam. The Maldives flag was adopted on July 25th, 1965.

The Maldives is an island country in Southeast Asia (the smallest Asian country) on the Indian Ocean. It is made up of 1200 islands (which include some of the smallest islands in the world), with only 200 of them being inhabited. The capital of the Maldives is Male which is home to the Male Friday Mosque (also known as the Male Hukuru Miskiy) which is the oldest mosque in the country, dating back to 1656, it is famous for the sea-culture architect as it is made from coral stone. The Maldives is a strictly Muslim nation and is the smallest Muslim nation in the world.

It is both the flattest and lowest lying country in the world with the highest point only being 5Ft above sea level. One of the strongest concerns of the natives are the rising waters which pose a threat to the island. The first underwater cabinet meeting was held at the bottom of the ocean to accentuate the threat that the rising waters pose to the island. The Maldives is a very poor country and the economy is strongly reliant on tourism and fishing.

The Kingdom of the Maldives was first established by an exiled Indian Prince. In 1558, the Portuguese established a base there and fiercely tried to impose Christianity on the natives, resulting in a revolt that forced the Portuguese to leave 15 years later. In 1887, the Maldives became a British Protectorate until their independence in 1957.

The Maldives has always been a popular tourist attraction, mainly due to the beaches as well as being popular for divers for the many different species of fish that can be seen, which include parrotfish, whitetip reef shark, dolphins, and green sea-turtles. The beaches are coralline sand which only make up around 5% of the world beaches and are renowned for their pure white sand and clear waters.

It is thought to be one of the safest tourist destinations in the world as it is so isolated and when tourists visit the island, they are driven straight to one of the 87 resorts and do not really associate with the locals as it is a strictly Muslim nation and inappropriate clothing, products or actions, i.e. wearing bikinis and drinking alcohol are very frowned upon and only permitted on the resorts.

We salute you in this national unity.
We salute you, with many good wishes in the national tongue,
Bowing the head in respect to the national symbol.
We salute the flag that has such might;
It falls into the sphere of victory, fortune and success
With its green and red and white together, and therefore we salute it.

To those heroes who sought out honour and pride for the nation
We give salute today in auspicious verses of remembrance.
May the nation of the Maldivians advance under guard and protection
And the name of the Maldivians become great.
Thus we pledge as we salute.

We wish for their freedom and progress in this world
And for their freedom from sorrows, and thus we salute.
With full respect and heartfelt blessing towards religion and our leaders,
We salute you in uprightness and truth.
May the State ever have auspicious honour and respect.
With good wishes for your continuing might, we salute you.

We offer free images of the Maldives Flag in four sizes (small, medium, large, and high resolution). These images are distributed royalty free for both personal and educational use and are ideal for use in projects and on websites. If you choose to use one of our images, attribution is appreciated, but not required.

The following html code snippets can be copied and pasted to add an image of the Maldives Flag to your website: