We carry authentic Nigeria Flags in both indoor and outdoor varieties. Our flags are proudly made in the United States from durable nylon and are printed with vibrant long-lasting inks. The Nigeria national flag is often displayed at embassies, outside of businesses associated with Nigeria, and at the homes of people who take great pride in their Nigerian heritage.

Our indoor flags are finished with a pole hem and your choice of with or without golden fringe. Gold fringe is the traditional way to display an indoor flag, however, some people choose without fringe for a simple and clean look that is also less expensive. If you are looking for a complete indoor presentation set, our Build Your Own Indoor International Flag Set program allows you to select a durable nylon indoor Nigeria Flag and choose between premium quality poles, bases, and ornaments, and tassel. For indoor applications, most buyers choose a 3ft. x 5ft. flag with an 8ft. pole, however, if you have a low ceiling, you may opt for a 7ft. pole, which is designed to work with drop ceilings. If you are looking for a very substantial international flag display, our 4ft. x 6ft. indoor flags can be paired with a 9ft. pole for our largest indoor display option.

Our outdoor international flags are finished with a canvas header and brass grommets and are offered in four sizes: 2ft. x 3ft., 3ft. x 5ft., 4ft. x 6ft., and 5ft. x 8ft., to fit any sized flagpole. Typically, outdoor flags are flown outside of government organizations, businesses, and institutions on in-ground and wall-mount flagpoles, however, some people also buy these flags to display their international pride at home. If you are looking for a wall-mount Nigeria flag set to display outside of your home, our Build Your Own Outdoor International Flag Set program will allow you to choose between premium quality 6ft. poles and brackets to display the Nigeria Flag on your front porch. Outdoor flags can also be displayed indoors on interior walls of your home with screws anchored in the wall to attach to the grommets.

In addition to the flags we offer for purchase, we maintain an archive of the audio and lyrics of the Nigeria National Anthem, historical information about the Nigeria flag, demographic data about Nigeria, and free high resolution images of the Nigeria flag for use in projects and on websites. 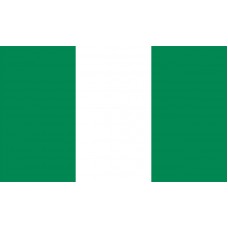 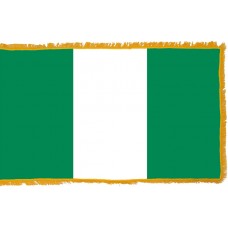 History of the Nigerian Flag

The Nigeria flag features three vertical stripes, green on either side of white. The two green sections are representative of the nation's natural wealth whilst the white stripe denotes peace. When the flag was first designed by a 23 year old student, it had a red sun design in the center of the white stripe, which was subsequently removed by the judges who were running the nationwide competition for a flag design.

The Nigeria flag redesign was suggested to coincide with Nigerian Independence in 1960. In the 1800's Britain had a significant presence in Nigeria, although their occupation and control of the area wasn't officially recognized until 1885. Early in 1914 the unification of the north and south regions of Nigeria had been completed and the country became a protectorate nation of Great Britain. As was the case at the time for protectorate nations, an ensign flag was used, this comprised of a blue background with the union jack of Britain in the top left corner.

The design to the right of the flag caused controversy in Nigeria and other nations throughout Africa and the middle east, this was due to the Star of David being used, a reference to the Igbo Jews of Nigeria. The controversial design of the flag remained until 1960 when the current design was unveiled as the new standard.

During the early years of independence, the government was ruled under a shared power between various political parties. Disagreement, perceived corruption, and discontent soon set in and 1967 saw the start of a three-year civil war. When the war ended in 1970 the country became ruled by the military junta, despite attempts to install democracy in the country, the military ruled the country until 1999 when the first democratic election in 30 years took place.

One of the biggest benefits to the Nigerian economy is the export of oil. Nigeria is the biggest trading partner to the United States in sub-Saharan Africa, providing a fifth of all oil imports to the USA. Despite having little to no investment in infrastructure from the military led government, Nigeria has seen exponential growth, being ranked 21st in the world for GDP and showing a year on year economic increase averaging 8%. It is projected that Nigeria's economy will have the highest GDP between 2010 and 2050, having already overtaken South Africa as the African continents largest economy.

Nigeria is home to over 500 ethnic groups with a diverse range of languages and customs making the country rich in ethnic diversity and history. Over 520 languages are spoken in Nigeria with English being the official language and used in education, business and politics.

Travel and tourism to Nigeria comes with warnings against all travel to the north east region and cautions for many other areas. The country is rich in history and the main city of Lagos has become the modern face of Africa, with many new technological industries bringing wealth to the area. As a result of this the area is now bustling with upmarket restaurants and clubs, and an arts scene that is making impressions on the world stage.

Arise, O compatriots,
Nigeria's call obey
To serve our Fatherland
With love and strength and faith.
The labour of our heroes past
Shall never be in vain,
To serve with heart and might
One nation bound in freedom, peace and unity.

O God of creation,
Direct our noble cause;
Guide our Leaders right:
Help our Youth the truth to know,
In love and honesty to grow,
And living just and true,
Great lofty heights attain,
To build a nation where peace and justice reign.

We offer free images of the Nigeria Flag in four sizes (small, medium, large, and high resolution). These images are distributed royalty free for both personal and educational use and are ideal for use in projects and on websites. If you choose to use one of our images, attribution is appreciated, but not required.

The following html code snippets can be copied and pasted to add an image of the Nigeria Flag to your website: