We carry authentic Liberia Flags in both indoor and outdoor varieties. Our flags are proudly made in the United States from durable nylon and are printed with vibrant long-lasting inks. The Liberia national flag is often displayed at embassies, outside of businesses associated with Liberia, and at the homes of people who take great pride in their Liberian heritage.

Our indoor flags are finished with a pole hem and your choice of with or without golden fringe. Gold fringe is the traditional way to display an indoor flag, however, some people choose without fringe for a simple and clean look that is also less expensive. If you are looking for a complete indoor presentation set, our Build Your Own Indoor International Flag Set program allows you to select a durable nylon indoor Liberia Flag and choose between premium quality poles, bases, and ornaments, and tassel. For indoor applications, most buyers choose a 3ft. x 5ft. flag with an 8ft. pole, however, if you have a low ceiling, you may opt for a 7ft. pole, which is designed to work with drop ceilings. If you are looking for a very substantial international flag display, our 4ft. x 6ft. indoor flags can be paired with a 9ft. pole for our largest indoor display option.

Our outdoor international flags are finished with a canvas header and brass grommets and are offered in four sizes: 2ft. x 3ft., 3ft. x 5ft., 4ft. x 6ft., and 5ft. x 8ft., to fit any sized flagpole. Typically, outdoor flags are flown outside of government organizations, businesses, and institutions on in-ground and wall-mount flagpoles, however, some people also buy these flags to display their international pride at home. If you are looking for a wall-mount Liberia flag set to display outside of your home, our Build Your Own Outdoor International Flag Set program will allow you to choose between premium quality 6ft. poles and brackets to display the Liberia Flag on your front porch. Outdoor flags can also be displayed indoors on interior walls of your home with screws anchored in the wall to attach to the grommets.

In addition to the flags we offer for purchase, we maintain an archive of the audio and lyrics of the Liberia National Anthem, historical information about the Liberia flag, demographic data about Liberia, and free high resolution images of the Liberia flag for use in projects and on websites. 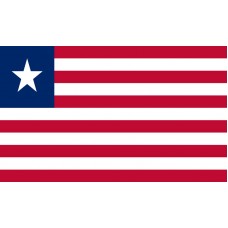 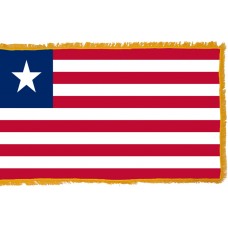 History of the Liberian Flag

The Liberia Flag consists of stripes and a star and closely resembles the flag of the USA. It features the colors red, white, and blue. There are 11 red and white stripes and in the top left-hand corner is a blue square with a white star in the middle of it. The 11 stripes represent the 11 signatories of the Liberian independence. The red and white colors are symbolic of the courage and high morals. The blue square represents the continent of Africa and the white star symbolizes the first independent republic of Africa. The Liberia flag was adopted on July 26th, 1847, when the country declared its independence.

Liberia is a country located in Western Africa and shares borders with Sierra Leone, Guinea, The Ivory Coast, and the Atlantic Ocean. Liberia, which translates as "Land of the Free" was founded in 1822 when the American Colonization began to send freed black slaves there to establish a colony. The first settlement in Libera was built by 86 immigrants in the city of Christianopolis. Over 13,000 black people were sent to Liberia and were identified as Americo-Liberians. The Americo-Liberians are people who are very proud of their American heritage. The first President of Liberia was a man named, Joseph Jenkins Roberts, who was also a freed slave. Liberia is the only country in Africa that is home to native Africans but was actually founded by the USA. It is also the only country that had self-proclaimed independence and was not involved in a war to gain it and is only the second black republic in the world, following Haiti.

The capital city of Liberia is Monrovia, which is also known to be the wettest capital in the world. Monrovia was formerly known as Christianopolis but the name changed and the capital city was named after the American president, James Monroe.

The Liberian economy is mainly dependent on rubber processing (Liberia is home to the largest rubber plantation), palm oil processing, diamonds, and timber. Liberia is quite a poor country and is not a popular tourist destination. If tourists do visit, there are a collection of hotels in the capital city of Monrovia that look very run down.

Liberia is home to West Africa's biggest primary rainforest (it was the first African country to agree to stop deforestation) but is home to only one national park, the "Sapo National Park". This park is home to varied wildlife, including over 200 species of birds and the endangered species - the pygmy hippopotamus. The beaches in Liberia, as well as being beautiful are quite popular with surfers, especially Silver Beach, but anyone that chooses to go and surf there must be a strong swimmer to be able to contend with the aggressive current.

We offer free images of the Liberia Flag in four sizes (small, medium, large, and high resolution). These images are distributed royalty free for both personal and educational use and are ideal for use in projects and on websites. If you choose to use one of our images, attribution is appreciated, but not required.

The following html code snippets can be copied and pasted to add an image of the Liberia Flag to your website: