We carry authentic Burundi Flags in both indoor and outdoor varieties. Our flags are proudly made in the United States from durable nylon and are printed with vibrant long-lasting inks. The Burundi national flag is often displayed at embassies, outside of businesses associated with Burundi, and at the homes of people who take great pride in their Burundi heritage.

Our indoor flags are finished with a pole hem and your choice of with or without golden fringe. Gold fringe is the traditional way to display an indoor flag, however, some people choose without fringe for a simple and clean look that is also less expensive. If you are looking for a complete indoor presentation set, our Build Your Own Indoor International Flag Set program allows you to select a durable nylon indoor Burundi Flag and choose between premium quality poles, bases, and ornaments, and tassel. For indoor applications, most buyers choose a 3ft. x 5ft. flag with an 8ft. pole, however, if you have a low ceiling, you may opt for a 7ft. pole, which is designed to work with drop ceilings. If you are looking for a very substantial international flag display, our 4ft. x 6ft. indoor flags can be paired with a 9ft. pole for our largest indoor display option.

Our outdoor international flags are finished with a canvas header and brass grommets and are offered in four sizes: 2ft. x 3ft., 3ft. x 5ft., 4ft. x 6ft., and 5ft. x 8ft., to fit any sized flagpole. Typically, outdoor flags are flown outside of government organizations, businesses, and institutions on in-ground and wall-mount flagpoles, however, some people also buy these flags to display their international pride at home. If you are looking for a wall-mount Burundi flag set to display outside of your home, our Build Your Own Outdoor International Flag Set program will allow you to choose between premium quality 6ft. poles and brackets to display the Burundi Flag on your front porch. Outdoor flags can also be displayed indoors on interior walls of your home with screws anchored in the wall to attach to the grommets.

In addition to the flags we offer for purchase, we maintain an archive of historical information about the Burundi flag, demographic data about Burundi, and free high resolution images of the Burundi flag for use in projects and on websites. 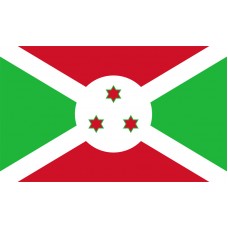 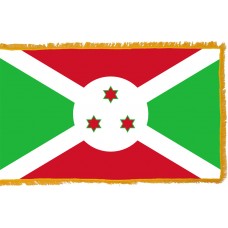 History of the Burundi Flag

The Burundi flag features a white diagonal cross that divides the flag into four parts. The upper and lower sections are red, while the right and left sections are green. The central feature of the flag is a white circle with three red stars in the center that are outlined in green. The white color of the flag represents peace and harmony, the green symbolizes hope for the country, and the red color signifies the suffering and struggle that the country endured to achieve independence. The three red stars have two different meanings - Firstly, they represent the 3 ethnic groups in the country, which are, The Hutu, The Twa, and The Tutsi and secondly they signify the national motto, which is "Unite, Travail, Progres," which translates as Unity, Work and Progress. The current Burundi flag was adopted on the June 28th, 1967.

For over 200 years, Burundi was an independent country inhabited by the Hutu, Twa, and Tutsi who inhabited the area for over 500 years but in 1890, it became part of German East Africa. During this period, the flag of Germany was flown in Burundi. Following World War I, in 1916, the Belgian army invaded, and occupied Burundi and the country became part of the Burundi Congo until 1962. On July 1st, 1962, Burundi finally gained its independence. This date is an important day that is celebrated each year in the country.

Following its independence, the Burundi flag was the same as it is now, but instead of the stars in the middle, there was a black drum, referred to as "Karyenda" which was the symbol of the King. In 1966, the color of the drum was changed to red. On November 29th, 1966, the flag changed again after the collapse of the monarchy and instead of the drum in the center, it was replaced by the Sorghum plant which was an important symbol of the agricultural industry in the country. On June 28th, 1967, the plant was replaced with the three stars that are still on the Burundi flag today.

Burundi is a landlocked county in Central Africa and shares borders with Rwanda, Tanzania, and the Democratic Republic of Congo. It is a very poor country whose economy is heavily dependent on agriculture. The capital city of Burundi is Bujumbara which is home to the Independence Monument which commemorates the history and the struggle with French, Belgian, and German rulers. Burundi's landscape consists mainly of hills, valleys,and banana plantations. The country is also home to Lake Tanganyika which is the second oldest freshwater lake in the world by volume and by depth. Other popular natural the "Chutes de la Kagera" (Kagera waterfalls) and the Rusizi River National Park which is home to hundreds of different animal species.

We offer free images of the Burundi Flag in four sizes (small, medium, large, and high resolution). These images are distributed royalty free for both personal and educational use and are ideal for use in projects and on websites. If you choose to use one of our images, attribution is appreciated, but not required.

The following html code snippets can be copied and pasted to add an image of the Burundi Flag to your website: