We carry authentic Mauritania Flags in both indoor and outdoor varieties. Our flags are proudly made in the United States from durable nylon and are printed with vibrant long-lasting inks. The Mauritania national flag is often displayed at embassies, outside of businesses associated with Mauritania, and at the homes of people who take great pride in their Mauritania heritage.

Our indoor flags are finished with a pole hem and your choice of with or without golden fringe. Gold fringe is the traditional way to display an indoor flag, however, some people choose without fringe for a simple and clean look that is also less expensive. If you are looking for a complete indoor presentation set, our Build Your Own Indoor International Flag Set program allows you to select a durable nylon indoor Mauritania Flag and choose between premium quality poles, bases, and ornaments, and tassel. For indoor applications, most buyers choose a 3ft. x 5ft. flag with an 8ft. pole, however, if you have a low ceiling, you may opt for a 7ft. pole, which is designed to work with drop ceilings. If you are looking for a very substantial international flag display, our 4ft. x 6ft. indoor flags can be paired with a 9ft. pole for our largest indoor display option.

Our outdoor international flags are finished with a canvas header and brass grommets and are offered in four sizes: 2ft. x 3ft., 3ft. x 5ft., 4ft. x 6ft., and 5ft. x 8ft., to fit any sized flagpole. Typically, outdoor flags are flown outside of government organizations, businesses, and institutions on in-ground and wall-mount flagpoles, however, some people also buy these flags to display their international pride at home. If you are looking for a wall-mount Mauritania flag set to display outside of your home, our Build Your Own Outdoor International Flag Set program will allow you to choose between premium quality 6ft. poles and brackets to display the Mauritania Flag on your front porch. Outdoor flags can also be displayed indoors on interior walls of your home with screws anchored in the wall to attach to the grommets. 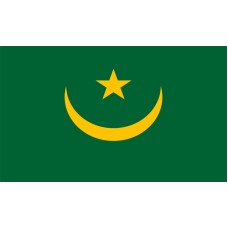 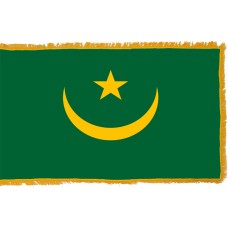 History of the Mauritania Flag

The Mauritania Flag features a green background with a gold crescent positioned in the center and a gold star above the crescent. There are two red horizontal bands, one at the top of the flag and the other at the bottom of the Mauritania Flag. The Green color represents Islam as well as symbolizing prosperity and progress and the gold color represents the sand of the Sahara Desert. The crescent and the star are also both symbols of Islam.

The red stripes were not added to Mauritania Flag until 2017, following a referendum, and they were included to represent "The efforts and sacrifices that the people of Mauritania will keep consenting, to the price of their blood, to defend their territory." When the Mauritania flag was first adopted on April 1st, 1959, it was the same as the current flag, except it did not have the two red bands. The current Mauritania flag was adopted on August 15th, 2017.

Mauritania is located in Western Africa (the 11th largest country in Africa), that shares borders with the Atlantic Ocean, Western Sahara, Algeria, Mali, and Senegal. The capital and largest city is called Nouakchott which is also one of the newest capital cities in the world. The capital was built for approximately 15,000 people but now, approximately 2,000,000 people occupy the area which make it a very densely populated city. The majority of Mauritania (90%) is actually within the Sahara Desert.

Since gaining independence, there have still been plenty of conflicts and wars, including the Western Sahara war (1975-1979) and the Mauritania-Senegal border war (1989-1991). Mauritania's economy is mainly reliant on agriculture and livestock.

It is not a very popular tourist destination despite some of the beautiful attractions that it is home to, which include "Banc d'Arguin National Park." This is one of the top attractions that Mauritania has and as well as being home to one of the largest bird sanctuaries in the world, it is home to many sand dunes, small islands, and coastal swamps. Another popular attraction is the "Port de Peche" which is a famous colorful boardwalk and fishing port in Nouakchott. The richest fishing waters in the world are found in Mauritania. The ancient trading centre in Mauritania was known as Chinguetti, and it is now a popular place to visit to see ancient and monumental towers and fortresses that were built during Medieval times.

Be a helper for God, and censure what is forbidden, And turn with the law which, which He wants you to follow, Hold no one to be useful or harmful, except for Him, And walk the path of the chosen one, and die while you are on it! For what was sufficient for the first of us, is sufficient for the last one, too. And leave those people who do evil things with respect to God. They misrepresented him by making him similar, and made all kinds of excuses. They made bold claims, and blackened notebooks. They let the nomads and the sedentary people, both make bitter experiences, And the great sins of their [doctrinal] innovations bequeathed small. And just in case a disputant, calls you to dispute about their claims, Do not, then, dispute on them, except by way of an external dispute.

We offer free images of the Mauritania Flag in four sizes (small, medium, large, and high resolution). These images are distributed royalty free for both personal and educational use and are ideal for use in projects and on websites. If you choose to use one of our images, attribution is appreciated, but not required.

The following html code snippets can be copied and pasted to add an image of the Mauritania Flag to your website: