We carry authentic Sierra Leone Flags in both indoor and outdoor varieties. Our flags are proudly made in the United States from durable nylon and are printed with vibrant long-lasting inks. The Sierra Leone national flag is often displayed at embassies, outside of businesses associated with Sierra Leone, and at the homes of people who take great pride in their Sierra Leone heritage.

Our indoor flags are finished with a pole hem and your choice of with or without golden fringe. Gold fringe is the traditional way to display an indoor flag, however, some people choose without fringe for a simple and clean look that is also less expensive. If you are looking for a complete indoor presentation set, our Build Your Own Indoor International Flag Set program allows you to select a durable nylon indoor Sierra Leone Flag and choose between premium quality poles, bases, and ornaments, and tassel. For indoor applications, most buyers choose a 3ft. x 5ft. flag with an 8ft. pole, however, if you have a low ceiling, you may opt for a 7ft. pole, which is designed to work with drop ceilings. If you are looking for a very substantial international flag display, our 4ft. x 6ft. indoor flags can be paired with a 9ft. pole for our largest indoor display option.

Our outdoor international flags are finished with a canvas header and brass grommets and are offered in four sizes: 2ft. x 3ft., 3ft. x 5ft., 4ft. x 6ft., and 5ft. x 8ft., to fit any sized flagpole. Typically, outdoor flags are flown outside of government organizations, businesses, and institutions on in-ground and wall-mount flagpoles, however, some people also buy these flags to display their international pride at home. If you are looking for a wall-mount Sierra Leone flag set to display outside of your home, our Build Your Own Outdoor International Flag Set program will allow you to choose between premium quality 6ft. poles and brackets to display the Sierra Leone Flag on your front porch. Outdoor flags can also be displayed indoors on interior walls of your home with screws anchored in the wall to attach to the grommets. 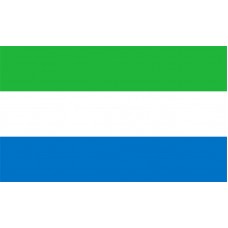 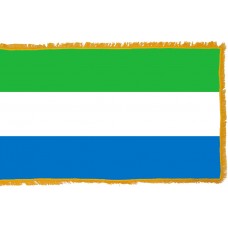 History of the Sierra Leone Flag

Sierra Leone is a country that has been inhabited for around 2,500 years. It was discovered in 1462 by the Portuguese explorer, Pedro de Sintra. He gave the country the name "Serra Leon" which translates as "Lioness Mountain" due to the formation of them.

Following the discovery of Sierra Leone, Portuguese traders soon began to arrive and the harbor in Freetown, as well as other Europeans, including the Dutch and the French. The Europeans set up trade here and it became the main base for all the countries trading slaves. In 1787, following the American Revolutionary War, the British found a settlement, known as "Province of Freedom." It was used to home some of the "Black Poor of London," who were African-American slaves that the British had managed to free during the war. In 1807, Sierra Leone became a British colony as the British made the slave trade illegal. Sierra Leone remained a British colony until it gained independence in 1961.

Sierra Leone's economy is mainly reliant on mining, especially diamonds. On February 14th, 1972, the world's third biggest diamond was discovered in Sierra Leone and is known as the "Star of Sierra Leone." The country is also a major producer of gold. Tourism is an industry that is gradually growing as the country does boast some of the most beautiful beaches in the world and is also visited for its mountains. The two islands that are popular and visited often are the Banana Islands and Turtle Island. The Banana Islands are made up of three islands, which are, Dublin, Ricketts, and Mes-Meheux. The island of Mes-Meheux is uninhabited and the island of Dublin is home to the best beaches, while the island of Ricketts is home to the best forests. The Banana Islands are only reachable by boat, ferry, or helicopter.

High We Exalt Thee, Realm of the Free

High we exalt thee, realm of the free;
Great is the love we have for thee;
Firmly united ever we stand,
Singing thy praise, O native land.
We raise up our hearts and our voices on high,
The hills and the valleys re-echo our cry;
Blessing and peace be ever thine own,
Land that we love, our Sierra Leone.

One with a faith that wisdom inspires,
One with a zeal that never tires;
Ever we seek to honour thy name,
Ours is the labour, thine the fame.
We pray that no harm on thy children may fall,
That blessing and peace may descend on us all;
So may we serve thee ever alone,
Land that we love, our Sierra Leone.

Knowledge and truth our forefathers spread,
Mighty the nations whom they led;
Mighty they made thee, so too may we
Show forth the good that is ever in thee.
We pledge our devotion, our strength and our might,
Thy cause to defend and to stand for thy right;
All that we have be ever thine own,
Land that we love, our Sierra Leone.

We offer free images of the Sierra Leone Flag in four sizes (small, medium, large, and high resolution). These images are distributed royalty free for both personal and educational use and are ideal for use in projects and on websites. If you choose to use one of our images, attribution is appreciated, but not required.

The following html code snippets can be copied and pasted to add an image of the Sierra Leone Flag to your website: