Our indoor flags are finished with a pole hem and your choice of with or without golden fringe. Gold fringe is the traditional way to display an indoor flag, however, some people choose without fringe for a simple and clean look that is also less expensive. If you are looking for a complete indoor presentation set, our Build Your Own Indoor International Flag Set program allows you to select a durable nylon indoor Congo Democratic Republic Flag and choose between premium quality poles, bases, and ornaments, and tassel. For indoor applications, most buyers choose a 3ft. x 5ft. flag with an 8ft. pole, however, if you have a low ceiling, you may opt for a 7ft. pole, which is designed to work with drop ceilings. If you are looking for a very substantial international flag display, our 4ft. x 6ft. indoor flags can be paired with a 9ft. pole for our largest indoor display option.

Our outdoor international flags are finished with a canvas header and brass grommets and are offered in four sizes: 2ft. x 3ft., 3ft. x 5ft., 4ft. x 6ft., and 5ft. x 8ft., to fit any sized flagpole. Typically, outdoor flags are flown outside of government organizations, businesses, and institutions on in-ground and wall-mount flagpoles, however, some people also buy these flags to display their international pride at home. If you are looking for a wall-mount Congo Democratic Republic flag set to display outside of your home, our Build Your Own Outdoor International Flag Set program will allow you to choose between premium quality 6ft. poles and brackets to display the Congo Democratic Republic Flag on your front porch. Outdoor flags can also be displayed indoors on interior walls of your home with screws anchored in the wall to attach to the grommets. 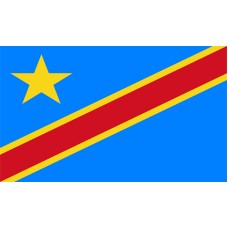 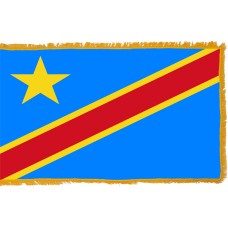 The Congo Democratic Republic flag features a sky blue background with a red stripe bordered in thin yellow lines running diagonally from the bottom hoist-side to the top fly-side. A yellow five-point star is included in the top hoist-side corner. The blue color of the flag signifies peace, the red color represents the bloodshed by the country's martyrs who fought for independence, and the yellow color symbolizes the wealth of the country. The star signifies the country's future. The Congo Democratic Republic Flag was officially adopted on February 20th, 2006. The flag used today originates from the flag that was used from 1963-1971, the only difference is the shade of blue used.

Between the years of 1877-1908, Congo was known as "Congo Free State" and King Leopold II of Belgium was the leader. During the 1884-1885 Berlin West Africa conference, King Leopold made promises to make improvements to the country and to end slavery. Unfortunately, he was very corrupt, and in his attempts to make money and to make the country more civilized, he exploited the people of Congo, forcing the citizenry into labor to harvest and process rubber.

If anyone tried to rebel, King Leopold II's army (the "Force Publique" that consisted of African soldiers led by Europeans) would deal with matters with extreme measures including kidnapping the families of the men who were rebelling, burning villages, slaughtering families, and cutting off the hands of the citizens including children. It is estimated that 1,000,000–15,000,000 people lost their lives during the rule of King Leopold II. Their lives were lost either through sickness, fatigue, famish or murder at the hands of the Force Publique.

Following the loss of lives, there was much international criticism and the Belgian government claimed the area from King Leopold II. After it was claimed by Belgium from 1908-1960, The Congo Democratic Republic became known as "Belgian Congo." During the years under the Belgian rule, conditions of the citizens improved slightly but on June 30th, 1960, The Congo Democratic Republic became independent. Since it has gained independence, it has endured years of war and conflict.

During the years that the country was called "Congo Free State," under King Leopold II, the national flag was dark blue with a large yellow star in the center. After gaining independence in 1960, 6 stars were added on the left-hand side of the flag. In 1963, the flag changed again to resemble the one that is used today, just a darker shade of blue and remained this way until 1971, when the country's name was changed to Zaire by dictator Mobutu SeseSeko. The country was known as Zaire until 1997 and Mobutu SeseSeko's defeat after which it became the Congo Democratic Republic. The flag has been changed three times between 1997-2006.

The Congo Democratic Republic is the second largest country in Africa and shares borders with Angola, Burundi, Central African Republic, Rwanda, South Sudan, Tanzania, Uganda, Zambia, and the Republic of Congo. The Congo river that runs through this country is the second largest river in the world and is the source of the country's name. The largest and capital city is Kinshasa. The country's main attraction is Lola Ya Bonobo which is the only sanctuary in the world for orphaned Bonobos.

Arise, Congolese,
United by fate,
United in the struggle for independence,
Let us hold up our heads, so long bowed,
And now, for good, let us keep moving boldly ahead, in peace.
Oh, ardent people, by hard work we shall build,
In peace, a country more beautiful than before.

Countrymen, sing the sacred hymn of your solidarity,
Proudly salute the golden emblem of your sovereignty, Congo.

Blessed gift of our forefathers,
Oh beloved country,
We shall people your soil and ensure your greatness.
Oh gentle sun of 30 June,
Be witness of the immortal oath of freedom
That we pass on to our children forever.

We offer free images of the Congo Democratic Republic Flag in four sizes (small, medium, large, and high resolution). These images are distributed royalty free for both personal and educational use and are ideal for use in projects and on websites. If you choose to use one of our images, attribution is appreciated, but not required.

Add the Congo Democratic Republic Flag to your Website:

The following html code snippets can be copied and pasted to add an image of the Congo Democratic Republic Flag to your website: