We carry authentic Brunei Flags in both indoor and outdoor varieties. Our flags are proudly made in the United States from durable nylon and are printed with vibrant long-lasting inks. The Brunei national flag is often displayed at embassies, outside of businesses associated with Brunei, and at the homes of people who take great pride in their Brunei heritage.

Our indoor flags are finished with a pole hem and your choice of with or without golden fringe. Gold fringe is the traditional way to display an indoor flag, however, some people choose without fringe for a simple and clean look that is also less expensive. If you are looking for a complete indoor presentation set, our Build Your Own Indoor International Flag Set program allows you to select a durable nylon indoor Brunei Flag and choose between premium quality poles, bases, and ornaments, and tassel. For indoor applications, most buyers choose a 3ft. x 5ft. flag with an 8ft. pole, however, if you have a low ceiling, you may opt for a 7ft. pole, which is designed to work with drop ceilings. If you are looking for a very substantial international flag display, our 4ft. x 6ft. indoor flags can be paired with a 9ft. pole for our largest indoor display option.

Our outdoor international flags are finished with a canvas header and brass grommets and are offered in four sizes: 2ft. x 3ft., 3ft. x 5ft., 4ft. x 6ft., and 5ft. x 8ft., to fit any sized flagpole. Typically, outdoor flags are flown outside of government organizations, businesses, and institutions on in-ground and wall-mount flagpoles, however, some people also buy these flags to display their international pride at home. If you are looking for a wall-mount Brunei flag set to display outside of your home, our Build Your Own Outdoor International Flag Set program will allow you to choose between premium quality 6ft. poles and brackets to display the Brunei Flag on your front porch. Outdoor flags can also be displayed indoors on interior walls of your home with screws anchored in the wall to attach to the grommets.

In addition to the flags we offer for purchase, we maintain an archive of the audio and lyrics of the Brunei National Anthem, historical information about the Brunei flag, demographic data about Brunei, and free high resolution images of the Brunei flag for use in projects and on websites. 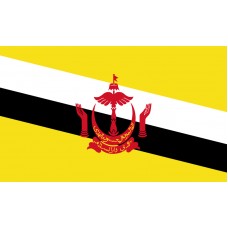 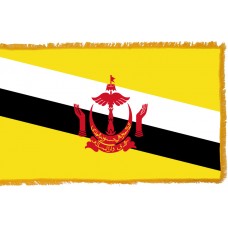 History of the Brunei Flag

The Brunei Flag features a yellow background with two diagonal stripes of white and black running from the top hoist side to the bottom fly side of the flag. The central feature of the flag is the country's national emblem, which is emblazoned in red and yellow upon the center. The central red crest features five segments, which are the flag, the parasol, the wings, the hands, the crescent, and a banner beneath the crescent. The parasol is the royal emblem and symbolizes the monarchy, the wings represent the country's peace and tranquility, the upturned hands are a representation of the government's agreement to protect the citizens' welfare. The crescent is the emblem of Islam and in the banner beneath, it reads, "State of Brunei, Abode of Peace." In the crescent, the national motto is written, which translates as, "Always Render Service with God's Guidance." The yellow color of the flag is the color of royalty and represents the Sultan of Brunei, while the black and white colors symbolize the chief ministers of the country.

Brunei is a very small nation on the island of Borneo. It is surrounded by Malaysia and the South China Sea. The capital and largest city of Brunei is Bandar Seri Begawan. Brunei was discovered by Awang Alak Betatar. Upon discovering the island, Awang Alak Betatar exclaimed, "Baru Nah," which translates as "That's it."

During the 15th, 16th and 17th centuries, the Brunei Sultanate and Brunei Empire ruled the nation, however, in 1888, the Empire began to collapse when the country was overtaken by the White Rajahs of Sarawak. After that, the country sought help from the British and Brunei became a British protectorate. As a result of this, Brunei was ruled by the British for over 100 years until it finally gained its independence on September 29th, 1959.

The country's main assets are its petroleum and natural gas fields. Because of this wealth, Brunei is known for having the highest living standards in the world. A major landmark in the country is the Sultan Omar Ali Saifuddin's Mosque which is a popular tourist attraction. This mosque is one of the most beautiful in the world, known for its golden dome and the glow that emits from the building even in the dark. Brunei is also home to "Jerudong Park" which is the largest park in South East Asia.

God Bless His Majesty
With A Long Life
(May he) Rule the Realm Justly and in Majesty
And Lead Our People (into) Eternal Happiness
(May) The Kingdom and Sultan Live in Peace
Lord, Save Brunei, The Abode of Peace

We offer free images of the Brunei Flag in four sizes (small, medium, large, and high resolution). These images are distributed royalty free for both personal and educational use and are ideal for use in projects and on websites. If you choose to use one of our images, attribution is appreciated, but not required.

The following html code snippets can be copied and pasted to add an image of the Brunei Flag to your website: