We carry authentic East Timor Flags in both indoor and outdoor varieties. Our flags are proudly made in the United States from durable nylon and are printed with vibrant long-lasting inks. The East Timor national flag is often displayed at embassies, outside of businesses associated with East Timor, and at the homes of people who take great pride in their East Timor heritage.

Our indoor flags are finished with a pole hem and your choice of with or without golden fringe. Gold fringe is the traditional way to display an indoor flag, however, some people choose without fringe for a simple and clean look that is also less expensive. If you are looking for a complete indoor presentation set, our Build Your Own Indoor International Flag Set program allows you to select a durable nylon indoor East Timor Flag and choose between premium quality poles, bases, and ornaments, and tassel. For indoor applications, most buyers choose a 3ft. x 5ft. flag with an 8ft. pole, however, if you have a low ceiling, you may opt for a 7ft. pole, which is designed to work with drop ceilings. If you are looking for a very substantial international flag display, our 4ft. x 6ft. indoor flags can be paired with a 9ft. pole for our largest indoor display option.

Our outdoor international flags are finished with a canvas header and brass grommets and are offered in four sizes: 2ft. x 3ft., 3ft. x 5ft., 4ft. x 6ft., and 5ft. x 8ft., to fit any sized flagpole. Typically, outdoor flags are flown outside of government organizations, businesses, and institutions on in-ground and wall-mount flagpoles, however, some people also buy these flags to display their international pride at home. If you are looking for a wall-mount East Timor flag set to display outside of your home, our Build Your Own Outdoor International Flag Set program will allow you to choose between premium quality 6ft. poles and brackets to display the East Timor Flag on your front porch. Outdoor flags can also be displayed indoors on interior walls of your home with screws anchored in the wall to attach to the grommets. 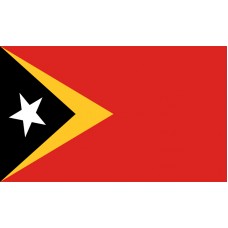 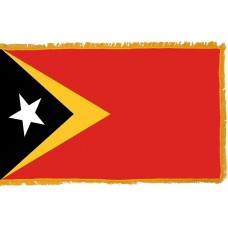 History of the East Timor Flag

Officially known as The Democratic Republic of Timor-Leste, East Timor is a maritime republic with a turbulent history. The East Timor Flag was adopted in 2002. Its flag is mainly red, which represents the ongoing struggle for independence. To the left, or hoist side, there are two triangles with a white star in the middle. The larger triangle is colored yellow, and the smaller black. The yellow color symbolizes colonialism in the countries past, while the black represents a dark past that the country is working to overcome. Together, the triangles form an arrow pointing forward. The flag's star is colored white to symbolize peace and is included on the flag as a symbol that is meant to guide the people of East Timor towards a brighter future. This one-star motif is used in other countries' flags, including that of Cuba and represents independence. In the case of East Timor, it is contrasted by a black background.

Sailors from Portugal landed in the country in 1515. In 1556 The Portuguese government set Dominican monks to colonize the country and from that point, East Timor was a Portuguese colony until 1975.

East Timor consists mainly of the eastern part of the island of Timor. This is a large island between Australia and the Asian continent, and is part of Maritime South-east Asia. There are thousands of islands in the region that lies between India and China. East Timor and the island of Timor lie amidst some of the most valuable sea trading routes in the world.

Islands on these routes were colonized for hundreds of years by Holland, Portugal, Spain, and Great Britain. The western part of Timor is a former Dutch colony which is now called Indonesian West Timor. The nation of Indonesia surrounds East Timor.

Indonesia invaded the country in 1975, which led to a conflict lasting until 1999. The country is heavily forested, which helped its nationalist forces in their fight against the Indonesian invasion. These forests are largely made up of sandalwood trees, which are highly valuable. It was this wood which first attracted colonizers from the western European powers. Despite laws designed to protect the forests, aggressive logging in recent years has caused the sandalwood forests to largely disappear. The disappearance of the country's forests has led to other major environmental effects. Despite this, East Timor is still home to some amazing scenery.

The country is very mountainous, with Guatamala the highest peak. These mountains attract adventure tourists from around the world. It has very pronounced wet and dry seasons throughout the year, as it is in the tropical zone. These are part of the dramatic contrasts in East Timor which make it a fascinating country.

We offer free images of the East Timor Flag in four sizes (small, medium, large, and high resolution). These images are distributed royalty free for both personal and educational use and are ideal for use in projects and on websites. If you choose to use one of our images, attribution is appreciated, but not required.

The following html code snippets can be copied and pasted to add an image of the East Timor Flag to your website: