We carry authentic Estonia Flags in both indoor and outdoor varieties. Our flags are proudly made in the United States from durable nylon and are printed with vibrant long-lasting inks. The Estonia national flag is often displayed at embassies, outside of businesses associated with Estonia, and at the homes of people who take great pride in their Estonian heritage.

Our indoor flags are finished with a pole hem and your choice of with or without golden fringe. Gold fringe is the traditional way to display an indoor flag, however, some people choose without fringe for a simple and clean look that is also less expensive. If you are looking for a complete indoor presentation set, our Build Your Own Indoor International Flag Set program allows you to select a durable nylon indoor Estonia Flag and choose between premium quality poles, bases, and ornaments, and tassel. For indoor applications, most buyers choose a 3ft. x 5ft. flag with an 8ft. pole, however, if you have a low ceiling, you may opt for a 7ft. pole, which is designed to work with drop ceilings. If you are looking for a very substantial international flag display, our 4ft. x 6ft. indoor flags can be paired with a 9ft. pole for our largest indoor display option.

Our outdoor international flags are finished with a canvas header and brass grommets and are offered in four sizes: 2ft. x 3ft., 3ft. x 5ft., 4ft. x 6ft., and 5ft. x 8ft., to fit any sized flagpole. Typically, outdoor flags are flown outside of government organizations, businesses, and institutions on in-ground and wall-mount flagpoles, however, some people also buy these flags to display their international pride at home. If you are looking for a wall-mount Estonia flag set to display outside of your home, our Build Your Own Outdoor International Flag Set program will allow you to choose between premium quality 6ft. poles and brackets to display the Estonia Flag on your front porch. Outdoor flags can also be displayed indoors on interior walls of your home with screws anchored in the wall to attach to the grommets.

In addition to the flags we offer for purchase, we maintain an archive of the audio and lyrics of the Estonia National Anthem, historical information about the Estonia flag, demographic data about Estonia, and free high resolution images of the Estonia flag for use in projects and on websites. 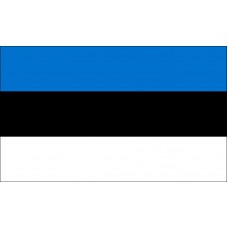 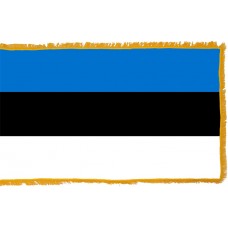 History of the Estonian Flag

The Estonia Flag features a simple and striking design of three equally sized horizontal bands, which are colored light blue at the top, black in the middle and white at the bottom. The flag is known as "sinimustvalge" in the Estonian language, and is used to represent the country's government on all national and international occasions.

The flag's color scheme is famously linked with the Estonian poet Martin Lipp, who wrote "The Estonian Flag," which is a statement of Estonian nationality which is similar in its way to The Star-Spangled Banner or La Marseillaise are a statement of national identity to the United States and France respectively. To Estonians, the light blue, black, and white are akin to the the red, white, and blue of the flags of the USA and France.

The light blue color represents the beautiful and vast sky which Estonia looks on to its west and north. The country is low lying, mainly on the Baltic Sea, and has spectacular views. Lipp included the light blue in the Estonian national poem to express this wonder of nature which is apparent all around.

The black band of the nation's flag signifies both an attachment to the land and Estonia's history of hard times. The country has been part of many empires, and lies at the far west of Russia and to the north of Germany. Its people have their own unique identify, of which they are very proud. Their country sits on a stretch of sea which has been pivotal in world history.

The white band at the bottom of the flag represents purity. This is in reference to the Estonian national values of continence and honest work. It literally underlines the Estonian people's belief that they will prevail due to their national character. They have been invaded by numerous foreign countries for hundreds of years, but remain stalwart.

The country has dramatic landscape features due to its position at the edge of the Baltic Sea. It is also part of a rising plateau of land known as the East European Platform. This literally elevates Estonia above many other countries. To the north of the country lies the Gulf of Finland, a part of the Baltic Sea which highlights the differing landscapes of mainland Europe from that of Scandinavia.

Estonia has a history which dates back to 9000 BC. It was the last European country to accept Christianity, and has a strong pagan culture. Its people are ethnically and culturally similar to the Finnish population.

Estonia is strongly allied to Western Europe, although it has a border with Russia. Its people have a richly independent history, which is reflected in the Estonia flag.

My native land, my joy and delight,
How fair thou art and bright!
And nowhere in the world all round
Can ever such a place be found
So well beloved as I love thee,
My native country dear!

My little cradle stood on ground soil,
Whose blessings ease my toil.
With my last breath my thanks to thee,
For true to death I'll ever be,
O worthy, most beloved and fine,
Thou, dearest country mine!

May God in Heaven thee gave birth to me,
My best, my dearest land!
May He be guard, may He be shield,
For ever may He bless and wield
O graciously all deeds of thine,
Thou dearest country mine!

We offer free images of the Estonia Flag in four sizes (small, medium, large, and high resolution). These images are distributed royalty free for both personal and educational use and are ideal for use in projects and on websites. If you choose to use one of our images, attribution is appreciated, but not required.

The following html code snippets can be copied and pasted to add an image of the Estonia Flag to your website: