We carry authentic North Korea Flags in both indoor and outdoor varieties. Our flags are proudly made in the United States from durable nylon and are printed with vibrant long-lasting inks. The North Korea national flag is often displayed at embassies, outside of businesses associated with North Korea, and at the homes of people who take great pride in their North Korean heritage.

Our indoor flags are finished with a pole hem and your choice of with or without golden fringe. Gold fringe is the traditional way to display an indoor flag, however, some people choose without fringe for a simple and clean look that is also less expensive. If you are looking for a complete indoor presentation set, our Build Your Own Indoor International Flag Set program allows you to select a durable nylon indoor North Korea Flag and choose between premium quality poles, bases, and ornaments, and tassel. For indoor applications, most buyers choose a 3ft. x 5ft. flag with an 8ft. pole, however, if you have a low ceiling, you may opt for a 7ft. pole, which is designed to work with drop ceilings. If you are looking for a very substantial international flag display, our 4ft. x 6ft. indoor flags can be paired with a 9ft. pole for our largest indoor display option.

Our outdoor international flags are finished with a canvas header and brass grommets and are offered in four sizes: 2ft. x 3ft., 3ft. x 5ft., 4ft. x 6ft., and 5ft. x 8ft., to fit any sized flagpole. Typically, outdoor flags are flown outside of government organizations, businesses, and institutions on in-ground and wall-mount flagpoles, however, some people also buy these flags to display their international pride at home. If you are looking for a wall-mount North Korea flag set to display outside of your home, our Build Your Own Outdoor International Flag Set program will allow you to choose between premium quality 6ft. poles and brackets to display the North Korea Flag on your front porch. Outdoor flags can also be displayed indoors on interior walls of your home with screws anchored in the wall to attach to the grommets. 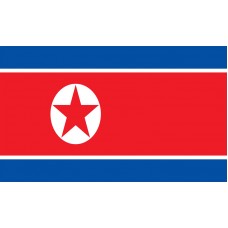 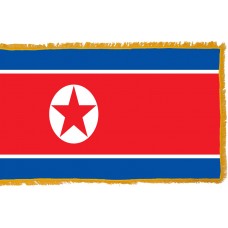 History of the North Korean Flag

The North Korea flag, first introduced in 1948, is a three color flag that comprises of a red horizontal stripe across the center, the red stripe is bordered by a thin white stripe both above and below, these white stripes are bordered by two thicker blue stripes. To the left of the central red stripe is a white circle with a five pointed red star in the center.

The North Korea flag can be hung both horizontally and vertically, the vertical display has the red star rotated to ensure the two lower points of the star point towards the base of the white circle, mirroring the same configuration of the horizontal display.

The red star is said to symbolize communism and has been used by various communist nations through history. Although the meaning of the star has been refuted by the North Korean government, the flag itself was designed by the Soviet Union during it's occupation of North Korea from 1945 to 1948. Over the years the government has moved away from a communist and/or socialist style of leadership and has adopted the Marxist-Leninist philosophy of Juche, an ideology of self reliance.

Since gaining its independence from the Soviet Union in 1948, the country has been led by the Kim dynasty. Kim Il-Sung served as the first leader of the Kim dynasty from 1948 to his death in 1994, upon his death his son, Kim Jong-il became the countries Supreme Leader. Kim Jong-il passed away in 2011, at which point his son Kim Jong-un became the new Supreme Leader of North Korea. In 2013 Kim Jong-un passed a law stating that only the Kim dynasty will lead the Korean Workers Party, the name given to the founding and ruling political party of North Korea.

For the last seventy years, North Korea has had a strained relationship with the outside world. A poor record of human rights violations, and military threats to other nations has led to severe sanctions from the world’s wealthiest nations.

Upon the inauguration of Donald Trump as President of the United States of America, tensions between the two countries have increased, with threats of attacks and violent rhetorics being made by both sides. In May 2018, Kim Jong-un had an historic meeting with the leader of South Korea, Moon Jae-in, paving the way for peace talks to start between the two nations. Later the same month, as promised, Kim Jong-un began the denuclearization of North Korea's nuclear program.

In popular media in the western world, North Korea has been the subject of ridicule through films like, Team America: World Police, and more recently The Interview with James Franco and Seth Rogen. In 2014, a large cyber attack against Sony Pictures was blamed on North Korea, the claim suggests they were trying to stop the release of the "The Interview." The film was delayed but eventually released in 2014.

We offer free images of the North Korea Flag in four sizes (small, medium, large, and high resolution). These images are distributed royalty free for both personal and educational use and are ideal for use in projects and on websites. If you choose to use one of our images, attribution is appreciated, but not required.

The following html code snippets can be copied and pasted to add an image of the North Korea Flag to your website: