We carry authentic Cuba Flags in both indoor and outdoor varieties. Our flags are proudly made in the United States from durable nylon and are printed with vibrant long-lasting inks. The Cuba national flag is often displayed at embassies, outside of businesses associated with Cuba, and at the homes of people who take great pride in their Cuban heritage.

Our indoor flags are finished with a pole hem and your choice of with or without golden fringe. Gold fringe is the traditional way to display an indoor flag, however, some people choose without fringe for a simple and clean look that is also less expensive. If you are looking for a complete indoor presentation set, our Build Your Own Indoor International Flag Set program allows you to select a durable nylon indoor Cuba Flag and choose between premium quality poles, bases, and ornaments, and tassel. For indoor applications, most buyers choose a 3ft. x 5ft. flag with an 8ft. pole, however, if you have a low ceiling, you may opt for a 7ft. pole, which is designed to work with drop ceilings. If you are looking for a very substantial international flag display, our 4ft. x 6ft. indoor flags can be paired with a 9ft. pole for our largest indoor display option.

Our outdoor international flags are finished with a canvas header and brass grommets and are offered in four sizes: 2ft. x 3ft., 3ft. x 5ft., 4ft. x 6ft., and 5ft. x 8ft., to fit any sized flagpole. Typically, outdoor flags are flown outside of government organizations, businesses, and institutions on in-ground and wall-mount flagpoles, however, some people also buy these flags to display their international pride at home. If you are looking for a wall-mount Cuba flag set to display outside of your home, our Build Your Own Outdoor International Flag Set program will allow you to choose between premium quality 6ft. poles and brackets to display the Cuba Flag on your front porch. Outdoor flags can also be displayed indoors on interior walls of your home with screws anchored in the wall to attach to the grommets.

In addition to the flags we offer for purchase, we maintain an archive of the audio and lyrics of the Cuba National Anthem, historical information about the Cuba flag, demographic data about Cuba, and free high resolution images of the Cuba flag for use in projects and on websites. 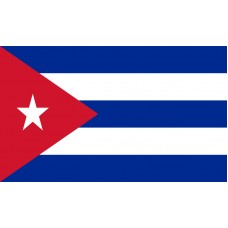 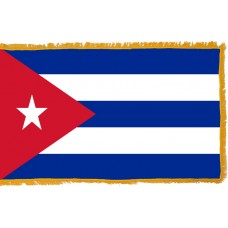 History of the Cuban flag

The Cuba flag features a design of five alternating blue and white stripes: blue, white, blue, white, and blue. A red triangle is positioned on the hoist-side of the flag with a large white five-pointed star in the middle. The blue stripes represent the three states that the island had been divided into while under Spanish rule which were Central, Occidental, and Oriental. The two white stripes are symbolic of the devotion and strength expended by the soldiers during the battle for independence. The triangle-shape represents fraternity, equality and liberty, and the red color symbolizes the blood spilled and lives lost during the struggle for independence.

The star on the Cuban flag represents freedom and is referred to as "La Estrella Solitaria," which translates as the "Lone Star." The Cuban flag was originally designed in 1849 and was raised for the first time in the city of Cardenas on May 19th, 1850, when only the city gained independence. It was officially raised to represent the nation as a whole on May 20th, 1902, when the nation became independent. The Cuban flag was designed and created by Narciso Lopez, who was a Cuban exile and the poet, Miguel Teurbe Tolon. It was Miguel's wife that first stitched the flag and the flag was first flown when Narciso Lopez tried to free Cuba from Spanish rule but was defeated. Following the first attempt for freedom in 1850, Cuba tried again to gain independence in 1868 and a war began, which is known as the "Ten Years War."

Following this war, Cuba fought again in two smaller wars, "The Little War" from 1879–1880 and the "Cuban War of Independence" from 1895-1898. During the Cuban War of Independence, the USA became involved, resulting in the "Spanish-American War." After the victory of the USA in this war and Cuba's independence from Spain, Cuba became an American Protectorate and it was the USA flag that was flown from January 1st, 1899 until 1902. In 1902, Cuba finally became independent, and became the "Republic of Cuba," even though the USA still had the right to be involved in Cuban affairs and politics. The flag was officially raised on the castles of "Tres Reyes Del Morro."

The Spanish arrived in Cuba in 1511, after the island was discovered by Christopher Columbus and they claimed it as Spanish territory. During this period, African slaves and Chinese laborers were brought to the country to work on the sugar fields. The majority of the Chinese immigrants stayed and settled in Cuba, known as the Chinese Cubans. During the ten years war, the Chinese Cubans fought with the rebels, resulting in the death of 2,000.

Cuba is the largest island in the Caribbean Sea and is part of a group of small islands where the Atlantic Ocean meets with the Gulf of Mexico. It is sometimes referred to as "El Cocodrilo" due to the shape of the island resembling a crocodile from an aerial view. The capital of Cuba is Havana, or "La Habana," which is home to a monument that pays tribute to the Cuban Chinese that lost their lives during the 10 years war.

Hasten to battle, men of Bayamo!
The fatherland looks proudly to you;
Do not fear a glorious death,
Because to die for the fatherland is to live.

To live in chains is to live
In dishonour and ignominy,
Hear the clarion's call;
Hasten, brave ones, to battle!

We offer free images of the Cuba Flag in four sizes (small, medium, large, and high resolution). These images are distributed royalty free for both personal and educational use and are ideal for use in projects and on websites. If you choose to use one of our images, attribution is appreciated, but not required.

The following html code snippets can be copied and pasted to add an image of the Cuba Flag to your website: