We carry authentic Zambia Flags in both indoor and outdoor varieties. Our flags are proudly made in the United States from durable nylon and are printed with vibrant long-lasting inks. The Zambia national flag is often displayed at embassies, outside of businesses associated with Zambia, and at the homes of people who take great pride in their Zambian heritage.

Our indoor flags are finished with a pole hem and your choice of with or without golden fringe. Gold fringe is the traditional way to display an indoor flag, however, some people choose without fringe for a simple and clean look that is also less expensive. If you are looking for a complete indoor presentation set, our Build Your Own Indoor International Flag Set program allows you to select a durable nylon indoor Zambia Flag and choose between premium quality poles, bases, and ornaments, and tassel. For indoor applications, most buyers choose a 3ft. x 5ft. flag with an 8ft. pole, however, if you have a low ceiling, you may opt for a 7ft. pole, which is designed to work with drop ceilings. If you are looking for a very substantial international flag display, our 4ft. x 6ft. indoor flags can be paired with a 9ft. pole for our largest indoor display option.

Our outdoor international flags are finished with a canvas header and brass grommets and are offered in four sizes: 2ft. x 3ft., 3ft. x 5ft., 4ft. x 6ft., and 5ft. x 8ft., to fit any sized flagpole. Typically, outdoor flags are flown outside of government organizations, businesses, and institutions on in-ground and wall-mount flagpoles, however, some people also buy these flags to display their international pride at home. If you are looking for a wall-mount Zambia flag set to display outside of your home, our Build Your Own Outdoor International Flag Set program will allow you to choose between premium quality 6ft. poles and brackets to display the Zambia Flag on your front porch. Outdoor flags can also be displayed indoors on interior walls of your home with screws anchored in the wall to attach to the grommets.

In addition to the flags we offer for purchase, we maintain an archive of historical information about the Zambia flag, demographic data about Zambia, and free high resolution images of the Zambia flag for use in projects and on websites. 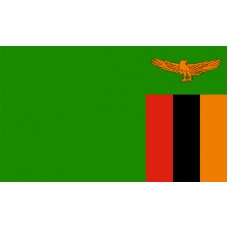 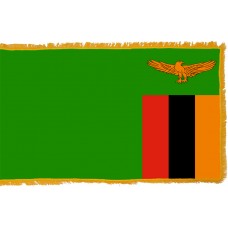 History of the Zambia Flag

Zambia is a landlocked country that is located in Southern Africa and shares borders with the Democratic Republic of the Congo, Tanzania, Malawi, Mozambique, Zimbabwe, Botswana, Namibia, and Angola. The capital and largest city of Zambia is called Lusaka. Zambia was formerly known as Northern Rhodesia, and, following its independence, when its name was changed, Zambia was named after the Zambezi River. Zambia was first inhabited by the Khoisan people until The Bantu people began to settle the area. Europeans did not reach the area until the late 18th century when the Portuguese explorer Francisco de Lacerda arrived. More Europeans began to arrive and settle during the 19th century. In 1855, Scottish explorer David Livingstone arrived with the intentions of ending the slave trade through the "3 Cs" which were, Christianity, Commerce, and Civilization. He was the first European that saw what is now, the country's most famous landmark, the waterfalls on the Zambezi River. David Livingstone gave the waterfalls the name "Victoria Falls" after the Queen of England, Queen Victoria. David Livingstone described the waterfalls as "Scenes so lovely they must have been gazed upon by angels in their flight." In 1888, Northern Rhodesia was proclaimed a "British Sphere of Influence" and in 1924, it became a British Protectorate. During its time as a protectorate, Livingstone was the capital of the country. Northern Rhodesia gained independence and became the Republic of Zambia on October 24th, 1964.

Zambia is considered to be one of the poorest countries in the world. It is the biggest copper producer in Africa which contributes a large portion to the country's economy. As well as the copper produce, the country's economy is very dependent on its agriculture and on tourism. The main tourist attraction of Zambia is the Mosi-O-Tunya National Park which is home to the Victoria Falls as well as many endangered species, such as the warthog, antelope, giraffes, and rhinos, amongst others. The Victoria Falls are also referred to as "Mosi-O-Tunya" or "thundering smoke" and are the largest waterfalls in the world and were recognized as being one of the seven natural wonders of the world. The Livingstone museum is another landmark that is often visited that is located on the island Livingstone (named after David Livingstone) which is near Victoria Falls and displays much of Zambia's history as well as some possessions of David Livingstone.

We offer free images of the Zambia Flag in four sizes (small, medium, large, and high resolution). These images are distributed royalty free for both personal and educational use and are ideal for use in projects and on websites. If you choose to use one of our images, attribution is appreciated, but not required.

The following html code snippets can be copied and pasted to add an image of the Zambia Flag to your website: