We carry authentic Samoa Flags in both indoor and outdoor varieties. Our flags are proudly made in the United States from durable nylon and are printed with vibrant long-lasting inks. The Samoa national flag is often displayed at embassies, outside of businesses associated with Samoa, and at the homes of people who take great pride in their Samoan heritage.

Our indoor flags are finished with a pole hem and your choice of with or without golden fringe. Gold fringe is the traditional way to display an indoor flag, however, some people choose without fringe for a simple and clean look that is also less expensive. If you are looking for a complete indoor presentation set, our Build Your Own Indoor International Flag Set program allows you to select a durable nylon indoor Samoa Flag and choose between premium quality poles, bases, and ornaments, and tassel. For indoor applications, most buyers choose a 3ft. x 5ft. flag with an 8ft. pole, however, if you have a low ceiling, you may opt for a 7ft. pole, which is designed to work with drop ceilings. If you are looking for a very substantial international flag display, our 4ft. x 6ft. indoor flags can be paired with a 9ft. pole for our largest indoor display option.

Our outdoor international flags are finished with a canvas header and brass grommets and are offered in four sizes: 2ft. x 3ft., 3ft. x 5ft., 4ft. x 6ft., and 5ft. x 8ft., to fit any sized flagpole. Typically, outdoor flags are flown outside of government organizations, businesses, and institutions on in-ground and wall-mount flagpoles, however, some people also buy these flags to display their international pride at home. If you are looking for a wall-mount Samoa flag set to display outside of your home, our Build Your Own Outdoor International Flag Set program will allow you to choose between premium quality 6ft. poles and brackets to display the Samoa Flag on your front porch. Outdoor flags can also be displayed indoors on interior walls of your home with screws anchored in the wall to attach to the grommets.

In addition to the flags we offer for purchase, we maintain an archive of historical information about the Samoa flag, demographic data about Samoa, and free high resolution images of the Samoa flag for use in projects and on websites. 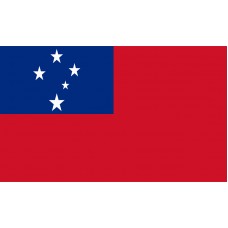 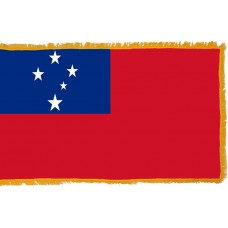 History of the Samoan Flag

The Samoa Flag consists of a red field with a blue rectangle in the top left corner. The blue rectangle contains the "Southern Cross" which is four big white stars and one small white star. The blue color represents freedom, the red color represents courage (as well as being the Samoan traditional color), and the white color represents purity. The Southern Cross represents the connection that Samoa still has with New Zealand (as it is also part of New Zealand’s flag) and it represents Samoa’s geographical position. The Samoa Flag was first adopted on February 24th, 1949, even though it was still a territory of New Zealand. At that time, there were only four stars on the flag. When Samoa gained independence from New Zealand, the same flag was used, and an extra cross was added to it. When Samoa was a German Colony, the flag that was used was a black, white, and red tricolor that had an Imperial Eagle on it. Samoa has had 7 different flags throughout its history.

Samoa is an island country that is located in the Pacific Ocean. The capital, and largest city of Samoa is called, Apia. Samoa is made up of 9 volcanic islands, with the two major ones being, Savai'i and Upolu. Savai'i is the largest island and is still volcanically active. The first European to reach the island was an explorer named Jacob Roggeveen in 1722.

In 1778, the French Admiral, Louis de Bougainville visited the islands and renamed them the "Navigator Islands" due to all the canoes of the Samoans. In 1899-1914, the Germans took control of the islands. In August 1914, at the beginning of WWI, New Zealand took control of the islands from Germany, following Britain's request to "perform this great and urgent imperial service." During WWII, New Zealand administered the islands until Samoa gained independence in 1962. Samoa and New Zealand, despite independence, still have very close ties today.

Samoa's economy is mainly reliant on agricultural exports and fishing, with its main export being tuna. It has not been classed as a major tourist destination despite the beautiful attractions that it is home to. The Lalomanu Beach is the most popular beach in Samoa due to the views, especially of the smaller islands' and its white sand. The "Sua Ocean Trench" is a major swimming spot that attracts the few tourists and is known as the "swimming hole." The swimming hole is a result of the eruption of the volcanos that caused the majority of the ground to fall away resulting in the 30-meter deep hole. The swimming hole can only be accessed by the use of a ladder. The "Afu Aau" waterfall (also known as the Olemoe Falls), is a waterfall that descends from the rainforest into a swimming pool.

We offer free images of the Samoa Flag in four sizes (small, medium, large, and high resolution). These images are distributed royalty free for both personal and educational use and are ideal for use in projects and on websites. If you choose to use one of our images, attribution is appreciated, but not required.

The following html code snippets can be copied and pasted to add an image of the Samoa Flag to your website: