We carry authentic Botswana Flags in both indoor and outdoor varieties. Our flags are proudly made in the United States from durable nylon and are printed with vibrant long-lasting inks. The Botswana national flag is often displayed at embassies, outside of businesses associated with Botswana, and at the homes of people who take great pride in their Botswana heritage.

Our indoor flags are finished with a pole hem and your choice of with or without golden fringe. Gold fringe is the traditional way to display an indoor flag, however, some people choose without fringe for a simple and clean look that is also less expensive. If you are looking for a complete indoor presentation set, our Build Your Own Indoor International Flag Set program allows you to select a durable nylon indoor Botswana Flag and choose between premium quality poles, bases, and ornaments, and tassel. For indoor applications, most buyers choose a 3ft. x 5ft. flag with an 8ft. pole, however, if you have a low ceiling, you may opt for a 7ft. pole, which is designed to work with drop ceilings. If you are looking for a very substantial international flag display, our 4ft. x 6ft. indoor flags can be paired with a 9ft. pole for our largest indoor display option.

Our outdoor international flags are finished with a canvas header and brass grommets and are offered in four sizes: 2ft. x 3ft., 3ft. x 5ft., 4ft. x 6ft., and 5ft. x 8ft., to fit any sized flagpole. Typically, outdoor flags are flown outside of government organizations, businesses, and institutions on in-ground and wall-mount flagpoles, however, some people also buy these flags to display their international pride at home. If you are looking for a wall-mount Botswana flag set to display outside of your home, our Build Your Own Outdoor International Flag Set program will allow you to choose between premium quality 6ft. poles and brackets to display the Botswana Flag on your front porch. Outdoor flags can also be displayed indoors on interior walls of your home with screws anchored in the wall to attach to the grommets. 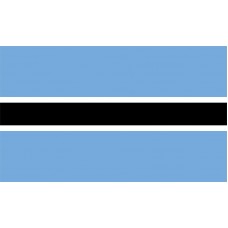 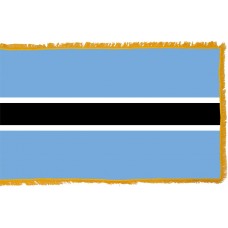 History of the Botswana Flag

The Botswana Flag features a light blue background with a horizontal thick black line that is bordered on the top and bottom by a thinner white line that runs across the flag from end to end vertically aligned in the central position. The light blue color used on the Botswana Flag symbolizes water, which is a very precious resource in the country due to the arid climate; Botswana frequently suffers from droughts so rain water is a very important resource that the country's agriculture relies on. The blue color also ties into the color used on the nation's coat of arms. On the coat of arms, in light blue ribbon at the bottom, the word, "Pula" is written, which translates as "Let there be rain." The black line in the middle with the white border represents the cooperation and amicability between the people of African and European descent. The black and white colors also personify the national animal, the zebra.

The Botswana flag was first utilized when the country gained independence on September 30th, 1966. It was used to replace the Union Jack flag that was being used. From 1885-1961, Botswana was under the British protection and was known as the "British Protectorate of Bechuanaland." Botswana obtained this title when they needed the British to provide them with protection from the Boers (from the South African Republic), who were invading. The first President, Seretse Khama was a very important figure who helped the country gain independence.

Botswana is a landlocked country in the continent of Africa that shares borders with South Africa, Namibia, Zimbabwe and Zambia. It is also the first democratic state in Africa.

Botswana was once one of the poorest countries in the world and was a very sparsely populated country, however, it has now become one of the fastest growing economies. The major industries that are helping to boost the economy are mining, cattle, and tourism. Tourists mainly visit Botswana for the safaris, which are home to many types of beautiful and amazing animals and wilderness. Over 40% of the land in Botswana is made up of national parks and wildlife reserves.

Two of the most important attractions in Botswana are the "Okavango Delta" and the "Kalahari Desert." The Kalahari Desert covers the majority of Botswana and is home to the Okavango Delta, which is the largest inland delta in the world. The Delta is also referred to as the "Jewel of Kalahari" and is considered to be one of the seven wonders of Africa. At the edge of the desert, in Orapa, one year after gaining independence, a diamond mine was discovered, which is called, "Jwaneng Diamond Mine." It is still the richest mine in the world and plays an important role in the nation's economy. Botswana is the biggest diamond producing country in the world, providing approximately 18% of the world's diamonds.

Blessed be this noble land,
Gift to us from God's strong hand,
Heritage our fathers left to us.
May it always be at peace.

Awake, awake, O men, awake!
And women close beside them stand,
Together we'll work and serve
This land, this happy land!

Word of beauty and of fame,
The name Botswana to us came.
Through our unity and harmony,
We'll remain at peace as one.

We offer free images of the Botswana Flag in four sizes (small, medium, large, and high resolution). These images are distributed royalty free for both personal and educational use and are ideal for use in projects and on websites. If you choose to use one of our images, attribution is appreciated, but not required.

The following html code snippets can be copied and pasted to add an image of the Botswana Flag to your website: