We carry authentic Yemen Flags in both indoor and outdoor varieties. Our flags are proudly made in the United States from durable nylon and are printed with vibrant long-lasting inks. The Yemen national flag is often displayed at embassies, outside of businesses associated with Yemen, and at the homes of people who take great pride in their Yemenese heritage.

Our indoor flags are finished with a pole hem and your choice of with or without golden fringe. Gold fringe is the traditional way to display an indoor flag, however, some people choose without fringe for a simple and clean look that is also less expensive. If you are looking for a complete indoor presentation set, our Build Your Own Indoor International Flag Set program allows you to select a durable nylon indoor Yemen Flag and choose between premium quality poles, bases, and ornaments, and tassel. For indoor applications, most buyers choose a 3ft. x 5ft. flag with an 8ft. pole, however, if you have a low ceiling, you may opt for a 7ft. pole, which is designed to work with drop ceilings. If you are looking for a very substantial international flag display, our 4ft. x 6ft. indoor flags can be paired with a 9ft. pole for our largest indoor display option.

Our outdoor international flags are finished with a canvas header and brass grommets and are offered in four sizes: 2ft. x 3ft., 3ft. x 5ft., 4ft. x 6ft., and 5ft. x 8ft., to fit any sized flagpole. Typically, outdoor flags are flown outside of government organizations, businesses, and institutions on in-ground and wall-mount flagpoles, however, some people also buy these flags to display their international pride at home. If you are looking for a wall-mount Yemen flag set to display outside of your home, our Build Your Own Outdoor International Flag Set program will allow you to choose between premium quality 6ft. poles and brackets to display the Yemen Flag on your front porch. Outdoor flags can also be displayed indoors on interior walls of your home with screws anchored in the wall to attach to the grommets.

In addition to the flags we offer for purchase, we maintain an archive of the audio and lyrics of the Yemen National Anthem, historical information about the Yemen flag, demographic data about Yemen, and free high resolution images of the Yemen flag for use in projects and on websites. 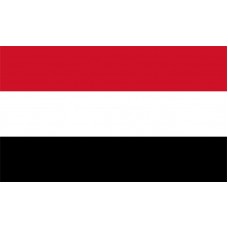 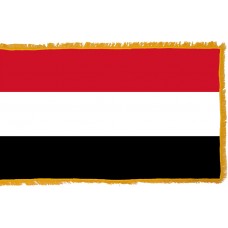 History of the Yemen Flag

Yemen is a country that is located in Western Asia and it shares borders with Saudi Arabia, Red Sea, Gulf of Aden, Arabian Sea, and Oman. The largest and capital city is called Sana'a. Sana'a is known to be one of the oldest inhabited capital cities as well and the highest capital city in the world. Yemen is a country that has endured much history and invasions and been under the control of many different empires and dynasties, which include the Romans, Ethiopians, Persians, Sulaynid Dynasty, Ayyubid Conquest, Rasulid Dynasty, and the Ottoman Empire, as well as coming under British control. The Ottoman Empire ruled Yemen from 1538 until the collapse of the Empire in 1918. Following the collapse of the Empire, the Northern part of Yemen was ruled by the Imams until 1962 and the Southern Port of Aden was a British Protectorate until 1967. On May 22nd, 1990, the two republics united after 300 years to form the new nation.

Yemen's economy is very poor and very reliant on its exports, especially oil. Yemen was a popular tourist destination until the 2011 Yemen crisis. The main attraction in Yemen is the 16th century city of Shibam which is also referred to as the "Manhattan of the Desert." As well as being home to plenty of desert landscape, it is also home to approximately 500 towers that are made of mudbrick. The historic town of Zabid is also another popular attraction. Zabid was the capital of Yemen between the 13th – 15th century and it is one of the oldest towns in Yemen. Zabid is home to the "Great Mosque of Zabid" which was built in 628AD by a follower of Muhammed, "Abu Musa Ashaari." The old city of the present capital, Sana'a, is one of the oldest inhabited cities in the world, and, according to legend, the city was founded by the son of Noah, Shem. It is home to some of the oldest buildings in the country that include "Samsarh" and the "Great Mosque of Sana'a" that are approximately 1500 years old. This city also features over 100 mosques, 12 baths (also known as hammams) and 6,500 houses.

We offer free images of the Yemen Flag in four sizes (small, medium, large, and high resolution). These images are distributed royalty free for both personal and educational use and are ideal for use in projects and on websites. If you choose to use one of our images, attribution is appreciated, but not required.

The following html code snippets can be copied and pasted to add an image of the Yemen Flag to your website: