We carry authentic Luxembourg Flags in both indoor and outdoor varieties. Our flags are proudly made in the United States from durable nylon and are printed with vibrant long-lasting inks. The Luxembourg national flag is often displayed at embassies, outside of businesses associated with Luxembourg, and at the homes of people who take great pride in their Luxembourg heritage.

Our indoor flags are finished with a pole hem and your choice of with or without golden fringe. Gold fringe is the traditional way to display an indoor flag, however, some people choose without fringe for a simple and clean look that is also less expensive. If you are looking for a complete indoor presentation set, our Build Your Own Indoor International Flag Set program allows you to select a durable nylon indoor Luxembourg Flag and choose between premium quality poles, bases, and ornaments, and tassel. For indoor applications, most buyers choose a 3ft. x 5ft. flag with an 8ft. pole, however, if you have a low ceiling, you may opt for a 7ft. pole, which is designed to work with drop ceilings. If you are looking for a very substantial international flag display, our 4ft. x 6ft. indoor flags can be paired with a 9ft. pole for our largest indoor display option.

Our outdoor international flags are finished with a canvas header and brass grommets and are offered in four sizes: 2ft. x 3ft., 3ft. x 5ft., 4ft. x 6ft., and 5ft. x 8ft., to fit any sized flagpole. Typically, outdoor flags are flown outside of government organizations, businesses, and institutions on in-ground and wall-mount flagpoles, however, some people also buy these flags to display their international pride at home. If you are looking for a wall-mount Luxembourg flag set to display outside of your home, our Build Your Own Outdoor International Flag Set program will allow you to choose between premium quality 6ft. poles and brackets to display the Luxembourg Flag on your front porch. Outdoor flags can also be displayed indoors on interior walls of your home with screws anchored in the wall to attach to the grommets. 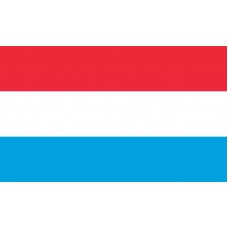 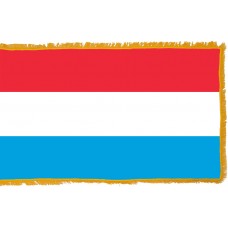 History of the Luxembourg Flag

The Luxembourg flag features three horizontal bands in the colors of, red, white, and blue. It very closely resembles the flag of the Netherlands, the only difference being is the shade of blue that is used. The Luxembourg flag was first used on June 12th, 1845 (until 1830, the country did not have a flag) and adopted officially on June 23rd, 1972. The colors of the Luxembourg flag date back to the 13th Century coat of arms that was used which featured blue and white stripes with a red lion on top.

Luxembourg is a country that has endured plenty of history and plenty of invasions. Now, it is the only country in the world that is a Grand Duchy (ruled by a Grand Duke or a Grand Duchess). It first became a Grand Duchy in 1815 and was ruled by the King. From 1815-1866, it was part of the German Confederation but gained full independence in 1867. Following their independence, Luxembourg remained politically neutral but still faced invasions during the wars.

In 1914-1918, during WWI, Luxembourg was invaded by Germany during their battle with France and the country was used as a base by the Germans. Despite this, Luxembourg still remained independent. During WWII, Luxembourg, once again, was invaded by Nazi Germany and the country was treated as German territory. Due to so many invasions throughout history, walled towns were built as well as castles to protect all the citizens. Luxembourg’s motto is "Mir Welle Bleiwe, War Mir Sin," which translates to "We Want to Remain What We Are." Their wish is to remain independent.

Luxembourg is a landlocked country in Europe that shares borders with France, Belgium, and Germany. It is often referred to as "The Heart of Europe" due to its location. The capital of Luxembourg is called "Luxembourg City" and it was here that the first fortification was built in 963, known as "The Bock." It has been attacked and reinforced so many times throughout the years as Spain, Burgundy, France, and Prussia have all attempted to gain control. It is now one of the most popular tourist attractions that Luxembourg is home to.

The capital is home to the historic old city which consists of many medieval buildings and fortifications and is proving to be a very popular place to visit, also for its ruins, underground galleries, and passages. It is also home to the walls of the Corniche which has been described as "the most beautiful balcony in Europe" which overlooks the old city.

Despite all the invasions and tragedy, Luxembourg is now the second richest country in the world and home to over 150 banks. The lowest minimum wage is the highest in Europe and even though the cost of living is quite high, the economy is thriving.

We offer free images of the Luxembourg Flag in four sizes (small, medium, large, and high resolution). These images are distributed royalty free for both personal and educational use and are ideal for use in projects and on websites. If you choose to use one of our images, attribution is appreciated, but not required.

The following html code snippets can be copied and pasted to add an image of the Luxembourg Flag to your website: