We carry authentic Croatia Flags in both indoor and outdoor varieties. Our flags are proudly made in the United States from durable nylon and are printed with vibrant long-lasting inks. The Croatia national flag is often displayed at embassies, outside of businesses associated with Croatia, and at the homes of people who take great pride in their Croatian heritage.

Our indoor flags are finished with a pole hem and your choice of with or without golden fringe. Gold fringe is the traditional way to display an indoor flag, however, some people choose without fringe for a simple and clean look that is also less expensive. If you are looking for a complete indoor presentation set, our Build Your Own Indoor International Flag Set program allows you to select a durable nylon indoor Croatia Flag and choose between premium quality poles, bases, and ornaments, and tassel. For indoor applications, most buyers choose a 3ft. x 5ft. flag with an 8ft. pole, however, if you have a low ceiling, you may opt for a 7ft. pole, which is designed to work with drop ceilings. If you are looking for a very substantial international flag display, our 4ft. x 6ft. indoor flags can be paired with a 9ft. pole for our largest indoor display option.

Our outdoor international flags are finished with a canvas header and brass grommets and are offered in four sizes: 2ft. x 3ft., 3ft. x 5ft., 4ft. x 6ft., and 5ft. x 8ft., to fit any sized flagpole. Typically, outdoor flags are flown outside of government organizations, businesses, and institutions on in-ground and wall-mount flagpoles, however, some people also buy these flags to display their international pride at home. If you are looking for a wall-mount Croatia flag set to display outside of your home, our Build Your Own Outdoor International Flag Set program will allow you to choose between premium quality 6ft. poles and brackets to display the Croatia Flag on your front porch. Outdoor flags can also be displayed indoors on interior walls of your home with screws anchored in the wall to attach to the grommets.

In addition to the flags we offer for purchase, we maintain an archive of the audio and lyrics of the Croatia National Anthem, historical information about the Croatia flag, demographic data about Croatia, and free high resolution images of the Croatia flag for use in projects and on websites. 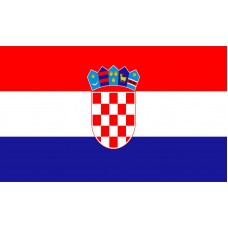 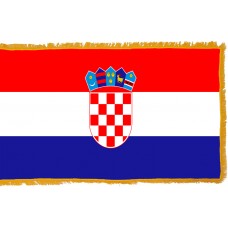 History of the Croatian Flag

The Croatia Flag features a design of three equal-sized horizontal stripes of red, white, and blue. The central feature of the flag is the Croatian Coat of Arms, which is positioned in the center of the white band and overlaps onto the red and blue bands. The red, white, and blue combination of colors have been used on the Croatian flag since 1848, representing the Kingdom of Croatia, the Kingdom of Slavonia, and the Kingdom of Dalmatia, which are all fundamental states of the Croatian Kingdom. The color red symbolizes bloodshed and sacrifices made in the wars, the color white symbolizes peace and harmony, and the color blue symbolizes hope for the country and freedom. The coat of arms features a main shield, checkerboard, and five small shields above that represent the ancient arms of Croatia, Dubrovnik, Dalmatia, Istria, and Slavonia. The checkerboard is a national emblem of Croatia. The present Croatian Flag was adopted on December 22nd, 1990 and is one of the world's newest national flags.

Croatia is located in South-Eastern Europe and shares borders with Hungary, Serbia, Bosnia, Herzegovina, and Slovenia. Its capital city is Zagreb. Croatia has endured a tragic and bloody history and has been governed by many different countries. In 1091, Croatia was conquered by Hungary and It eventually became part of the Austro-Hungarian Empire.

Following World War I, in 1918, after the Austro-Hungarian Empire collapsed, the "Kingdom of Serbs, Croats and Slovenes" was established. This establishment was defeated during World War II and in 1941, Croatia was under the control of the Nazis resulting in an army of Croats named the "Ustachi" who sought to slaughter and exterminate all Serbs and Jews. An opposing group named the "Chetniks" used terrorism to target the Croats. During World War II, it is thought that 70,000–100,000 people lost their lives due to the "Ustachi."

After World War II, when Germany was defeated, Croatia became a part of the new communist Yugoslavia, but many people were not satisfied with this and continued to battle for the country's independence. In 1990, elections took place for independence and in 1991 a declaration was made granting permission for Croatia to become independent from Yugoslavia. Following the declaration and the communists defeat, a six-month battle with the Yugoslavian army ensued leading to another loss of thousands of lives. Croatia was finally able to declare independence from Yugoslavia on June 25th, 1991. After gaining independence in 1992, the Serbs that lived in the Croatian territory also tried to claim their own independence, which resulted in another war. The Bosnian war took place from 1992-1995 and the battle between the Serbs, Croats, and Bosnians was the bloodiest event in Europe since World War II, with approximately 100,000 civilians dying during the war.

Despite all the wars and battles that Croatia has seen over the years, it has managed to re-establish itself, and is now a very safe country with many sights and attractions to visit, which include "Zlatni Rat Beach," a beach that changes shape and color depending on the wind. The small town of "Hum" is also a popular attraction which consists of two streets, two churches and a population of 23 and is known to be the smallest town in the world. Another popular attraction is the "Pula Arena," which is the largest and longest surviving Roman Gladiator Arena in the world.

Our beautiful homeland,
Oh dear heroic land,
Our father's ancient glory,
May you be blessed forever.

Sava, Drava, flow on,
Nor you Danube, lose your power,
Deep blue sea, tell the world,
That a Croat loves his people.

Whilst the sun warms his fields,
Whilst winds lash his oak trees,
Whilst his lost ones are with grave covered,
Whilst his living heart beats.

We offer free images of the Croatia Flag in four sizes (small, medium, large, and high resolution). These images are distributed royalty free for both personal and educational use and are ideal for use in projects and on websites. If you choose to use one of our images, attribution is appreciated, but not required.

The following html code snippets can be copied and pasted to add an image of the Croatia Flag to your website: