We carry authentic Moldova Flags in both indoor and outdoor varieties. Our flags are proudly made in the United States from durable nylon and are printed with vibrant long-lasting inks. The Moldova national flag is often displayed at embassies, outside of businesses associated with Moldova, and at the homes of people who take great pride in their Moldova heritage.

Our indoor flags are finished with a pole hem and your choice of with or without golden fringe. Gold fringe is the traditional way to display an indoor flag, however, some people choose without fringe for a simple and clean look that is also less expensive. If you are looking for a complete indoor presentation set, our Build Your Own Indoor International Flag Set program allows you to select a durable nylon indoor Moldova Flag and choose between premium quality poles, bases, and ornaments, and tassel. For indoor applications, most buyers choose a 3ft. x 5ft. flag with an 8ft. pole, however, if you have a low ceiling, you may opt for a 7ft. pole, which is designed to work with drop ceilings. If you are looking for a very substantial international flag display, our 4ft. x 6ft. indoor flags can be paired with a 9ft. pole for our largest indoor display option.

Our outdoor international flags are finished with a canvas header and brass grommets and are offered in four sizes: 2ft. x 3ft., 3ft. x 5ft., 4ft. x 6ft., and 5ft. x 8ft., to fit any sized flagpole. Typically, outdoor flags are flown outside of government organizations, businesses, and institutions on in-ground and wall-mount flagpoles, however, some people also buy these flags to display their international pride at home. If you are looking for a wall-mount Moldova flag set to display outside of your home, our Build Your Own Outdoor International Flag Set program will allow you to choose between premium quality 6ft. poles and brackets to display the Moldova Flag on your front porch. Outdoor flags can also be displayed indoors on interior walls of your home with screws anchored in the wall to attach to the grommets.

In addition to the flags we offer for purchase, we maintain an archive of the audio and lyrics of the Moldova National Anthem, historical information about the Moldova flag, demographic data about Moldova, and free high resolution images of the Moldova flag for use in projects and on websites. 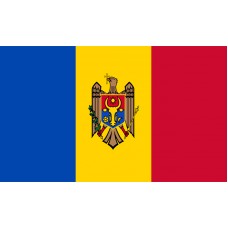 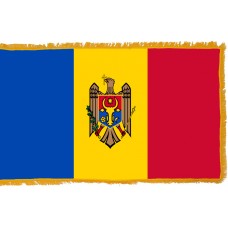 History of the Moldova Flag

The Moldova Flag features three vertical bands in the colors of blue, yellow, and red. In the middle of the yellow band, is the Moldova Coat of Arms which is an illustration of an eagle with a cross in its beak, holding an olive branch in its right talons (a symbol of peace) and a scepter in its left talons.

Moldova is a landlocked country located in Eastern Europe that shares borders with Ukraine and Romania. The capital city of Moldova is called Chisinau. During the Soviet Era, the capital city had to be rebuilt, due to an earthquake that destroyed the majority of the city and due to the bombing during WWII. Moldova is thought to be one of the smallest countries in Eastern Europe, despite being home to one of the largest villages in Europe, Congaz, and is also one of the poorest. It is a country that has been ruled by many different Empires and countries throughout the years and one of the countries that hardly has any buildings or monuments to show for its history as the majority were destroyed. Now, Moldova is home to only 30 monasteries and wood churches.

Moldova was part of the Greek, Roman, and Ottoman Empires. It was part of the "Principality of Moldovia." In 1812, it became part of the Russian Empire and was known as Bessarabia. In 1856, Southern Bessarabia returned to the Principality of Moldovia and three years later joined with Wallachia and formed Romania, which was under Russian rule from 1878. During the Russian Revolution, the MoldovianDemocratic Republic became independent but was joined with Romania, again, in 1918 until the breakdown of the Soviet Union when Moldova was finally able to declare independence on August 27th, 1991.

Moldova is one of the least visited countries in Europe, despite having some lovely tourist attractions such as, the "Emil Racovita" cave, which is the 8th largest cave in the world as well as the largest building in the world that is in the shape of a bottle – "Strong Drinks Museum," located in Tirnauka Village. Moldova is also home to the largest underground wine cellar, which is in the Guinness Book Of Records and currently holds 1.5 million bottles of wine as well as the largest cave monastery.

A treasure is our language that surges
From deep shadows of the past,
Chain of precious stones that scattered
All over our ancient land.

A burning flame is our language
Amidst a people waking
From a deathly sleep, no warning,
Like the brave man of the stories.

Our language is made of songs
From our soul's deepest desires,
Flash of lighting striking swiftly
Through dark clouds and blue horizons.

Our language is the language of bread
When the winds blow through the summer,
Uttered by our forefathers who
Blessed the country through their labour.

Our language is the greenest leaf
Of the everlasting forests,
Gentle river Nistru's ripples
Hiding starlight bright and shining.

Utter no more bitter cries now
That your language is too poor,
And you will see with what abundance
Flow the words of our precious country.

Our language is full of legends,
Stories from the days of old.
Reading one and then another
Makes one shudder, tremble and moan.

Our language is singled out
To lift praises up to heaven,
Uttering with constant fervour
Truths that never cease to beckon.

Our language is more than holy,
Words of homilies of old
Wept and sung perpetually
In the homesteads of our folks.

Resurrect now this our language,
Rusted through the years that have passed,
Wipe off filth and mould that gathered
When forgotten through our land.

Gather now the sparkling stone,
Catching bright light from the sun.
You will see the endless flooding
Of new words that overflow.

A treasure will spring up swiftly
From deep shadows of the past,
Chain of precious stones that scattered
All over our ancient land.

We offer free images of the Moldova Flag in four sizes (small, medium, large, and high resolution). These images are distributed royalty free for both personal and educational use and are ideal for use in projects and on websites. If you choose to use one of our images, attribution is appreciated, but not required.

The following html code snippets can be copied and pasted to add an image of the Moldova Flag to your website: