We carry authentic New Zealand Flags in both indoor and outdoor varieties. Our flags are proudly made in the United States from durable nylon and are printed with vibrant long-lasting inks. The New Zealand national flag is often displayed at embassies, outside of businesses associated with New Zealand, and at the homes of people who take great pride in their New Zealand heritage.

Our indoor flags are finished with a pole hem and your choice of with or without golden fringe. Gold fringe is the traditional way to display an indoor flag, however, some people choose without fringe for a simple and clean look that is also less expensive. If you are looking for a complete indoor presentation set, our Build Your Own Indoor International Flag Set program allows you to select a durable nylon indoor New Zealand Flag and choose between premium quality poles, bases, and ornaments, and tassel. For indoor applications, most buyers choose a 3ft. x 5ft. flag with an 8ft. pole, however, if you have a low ceiling, you may opt for a 7ft. pole, which is designed to work with drop ceilings. If you are looking for a very substantial international flag display, our 4ft. x 6ft. indoor flags can be paired with a 9ft. pole for our largest indoor display option.

Our outdoor international flags are finished with a canvas header and brass grommets and are offered in four sizes: 2ft. x 3ft., 3ft. x 5ft., 4ft. x 6ft., and 5ft. x 8ft., to fit any sized flagpole. Typically, outdoor flags are flown outside of government organizations, businesses, and institutions on in-ground and wall-mount flagpoles, however, some people also buy these flags to display their international pride at home. If you are looking for a wall-mount New Zealand flag set to display outside of your home, our Build Your Own Outdoor International Flag Set program will allow you to choose between premium quality 6ft. poles and brackets to display the New Zealand Flag on your front porch. Outdoor flags can also be displayed indoors on interior walls of your home with screws anchored in the wall to attach to the grommets. 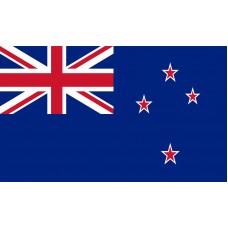 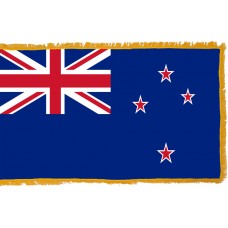 History of the New Zealand Flag

The New Zealand flag is blue and features the Union Jack flag of the United Kingdom in the upper left corner. To the right of the flag are four red stars with white borders. These stars are a representation of the constellation of Crux, also known as the Southern Cross, a formation of stars that are visible in the sky of the southern hemisphere.

The New Zealand flag very closely resembles the national flag of Australia, which features the Southern Cross in white and the commonwealth star in the lower left corner. The current design of the New Zealand flag was first used in 1869, however, it wasn't until 1902 that the flag was formerly adopted as the countries national flag. The representation of the Union Jack of the United Kingdom stemmed from the Treaty of Waitangi, a document signed in 1840 that formerly incorporated New Zealand as a British Colony.

Initially settled in the 13th century by a group of Polynesian explorers, New Zealand wasn't discovered by the outside world until the 17th century, when Dutch explorer Abel Tasman landed in 1642. Believing the islands to be linked to another island off the coast of South America, Tasman gave it the name, Staten Land, before being changed a few years later to Nova Zeelandia. It wasn't until over a one hundred years later that the British explorer, James Cook, would anglicise the name to what we know today.

As of 2018, the modern government in New Zealand is led by Labour Party Prime Minister, Jacinda Arden, who has been in office since October 2017. The government is well respected throughout the world as being one of the most well governed and stable states.

Sport in New Zealand is dominated by Rugby Union which is considered the national sport. The national team, referred to as The All Blacks due to their team kit, are recognised as one of the most successful rugby teams in the world. Further

The varied and visually stunning landscape of New Zealand has drawn in several of the most famous films ever made, these include Steven Spielberg's Avatar, Peter Jackson's The Hobbit and Lord of the Rings trilogies, The Chronicles of Narnia, King Kong, and The Last Samurai. Production of these films has added to the tourism figures of the country, as fans of the films flock to the locations used.

God of nations! at Thy feet
In the bonds of love we meet,
Hear our voices, we entreat,
God defend our Free Land.
Guard Pacific's triple star,
From the shafts of strife and war,
Make her praises heard afar,
God defend New Zealand

Peace, not war, shall be our boast
But should our foes assail our coast
Make us then a mighty host
God defend our free land
Lord of battles, in Thy might
Put our enemies to flight
Let our cause be just and right
God defend New Zealand

Let our love for Thee increase
May Thy blessings never cease
Give us plenty, give us peace
God defend our free land
From dishonour and from shame
Guard our country's spotless name
Crown her with immortal fame
God defend New Zealand

We offer free images of the New Zealand Flag in four sizes (small, medium, large, and high resolution). These images are distributed royalty free for both personal and educational use and are ideal for use in projects and on websites. If you choose to use one of our images, attribution is appreciated, but not required.

The following html code snippets can be copied and pasted to add an image of the New Zealand Flag to your website: