We carry authentic Argentina Flags in both indoor and outdoor varieties. Our flags are proudly made in the United States from durable nylon and are printed with vibrant long-lasting inks. The Argentina national flag is often displayed at embassies, outside of businesses associated with Argentina, and at the homes of people who take great pride in their Argentina heritage.

Our indoor flags are finished with a pole hem and your choice of with or without golden fringe. Gold fringe is the traditional way to display an indoor flag, however, some people choose without fringe for a simple and clean look that is also less expensive. If you are looking for a complete indoor presentation set, our Build Your Own Indoor International Flag Set program allows you to select a durable nylon indoor Argentina Flag and choose between premium quality poles, bases, and ornaments, and tassel. For indoor applications, most buyers choose a 3ft. x 5ft. flag with an 8ft. pole, however, if you have a low ceiling, you may opt for a 7ft. pole, which is designed to work with drop ceilings. If you are looking for a very substantial international flag display, our 4ft. x 6ft. indoor flags can be paired with a 9ft. pole for our largest indoor display option.

Our outdoor international flags are finished with a canvas header and brass grommets and are offered in four sizes: 2ft. x 3ft., 3ft. x 5ft., 4ft. x 6ft., and 5ft. x 8ft., to fit any sized flagpole. Typically, outdoor flags are flown outside of government organizations, businesses, and institutions on in-ground and wall-mount flagpoles, however, some people also buy these flags to display their international pride at home. If you are looking for a wall-mount Argentina flag set to display outside of your home, our Build Your Own Outdoor International Flag Set program will allow you to choose between premium quality 6ft. poles and brackets to display the Argentina Flag on your front porch. Outdoor flags can also be displayed indoors on interior walls of your home with screws anchored in the wall to attach to the grommets. 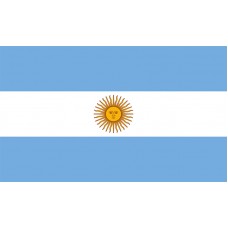 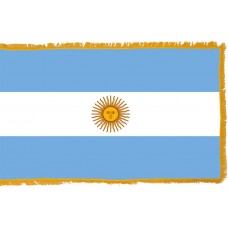 History of the Argentinean Flag

The Argentina flag features a "tri-band" design of three equal-sized horizontal stripes of blue, white, and blue. The central feature of the flag is a golden sun with a human face which is displayed prominently in the center of the white stripe. This design was created by Manuel Belgrano, the leader of the Argentinean revolution, and was adopted on February 12th, 1812.

The most popular interpretation of the meaning of the flag is that the blue color with the white in the middle signifies the blue sky dividing to reveal white clouds. This imagery is representative of the events of May 25th, 1810, when the first liberation demonstration occurred in Argentina's fight for independence. It is also thought by some that the white on the flag is actually silver, representing one of the most abundant and important natural resources in Argentina.

The original Argentina flag was created four years before independence from Spain was declared and it did not include the sun imagery in the center. The "Sun of May," which is now the national emblem of Argentina was added to the flag in 1818 and represents the May revolution. Juan De Dios Tupac Amaru designed the sun which has 32 rays, and pays tribute to Inti, the Inca God of Sun. Uruguay's flag features the same sun, but with a different number of rays. Today Argentina uses two flag designs: the flag that includes the sun is known as the "Official Ceremonial Flag" and the flag without the sun is known as the "Ornamental Flag."

The first European to visit the area that is now known as Argentina was Spanish explorer, Amerigo Vespucci, who discovered the area in 1502. Spanish explorers returned in subsequent years to further investigate the area, and in 1536, Pedro de Mendoza created the settlement of Buenos Aires, which was later abandoned in 1541. Spanish Explorer, Juan de Garay returned in 1580 to re-establish Buenos Aires and bring Spanish language and religion to the country. Spain maintained control of Argentina for almost 300 years, which started in 1516. The May Revolution of 1810 resulted in Argentinians revolting against Spanish rule and a government of Argentinians being created. After the Spanish rule was overthrown, a civil war broke out in Argentina, which was not resolved until On July 9th, 1816, when the Congress of Tucuman issued the Declaration of Independence. Each year, July 9th is celebrated in Argentina as independence day. 11 days after the country declared independence, on June 20th, 1816, the current flag was adopted. Each year, on the 20th of June, national flag day is celebrated in memory of Manuel Belgrano, the designer of the flag. The flag is raised in memory of the soldiers that fought in the revolution for the independence. Large celebrations occur in Rosario, where the flag was first hoisted in 1812 by Belgrano and there is an annual parade featuring military veterans and public officials.

Argentina is now thriving and is in fact one of the wealthiest Latin American countries. The majority of the population of Argentina is European. Buenos Aires is the capital and largest city in the country, which has earned the nickname, "Paris of South America," due to the major European influence and the fact that it has become a major tourist destination due to the many monuments and historical sites.

We offer free images of the Argentina Flag in four sizes (small, medium, large, and high resolution). These images are distributed royalty free for both personal and educational use and are ideal for use in projects and on websites. If you choose to use one of our images, attribution is appreciated, but not required.

The following html code snippets can be copied and pasted to add an image of the Argentina Flag to your website: