We carry authentic Suriname Flags in both indoor and outdoor varieties. Our flags are proudly made in the United States from durable nylon and are printed with vibrant long-lasting inks. The Suriname national flag is often displayed at embassies, outside of businesses associated with Suriname, and at the homes of people who take great pride in their Suriname heritage.

Our indoor flags are finished with a pole hem and your choice of with or without golden fringe. Gold fringe is the traditional way to display an indoor flag, however, some people choose without fringe for a simple and clean look that is also less expensive. If you are looking for a complete indoor presentation set, our Build Your Own Indoor International Flag Set program allows you to select a durable nylon indoor Suriname Flag and choose between premium quality poles, bases, and ornaments, and tassel. For indoor applications, most buyers choose a 3ft. x 5ft. flag with an 8ft. pole, however, if you have a low ceiling, you may opt for a 7ft. pole, which is designed to work with drop ceilings. If you are looking for a very substantial international flag display, our 4ft. x 6ft. indoor flags can be paired with a 9ft. pole for our largest indoor display option.

Our outdoor international flags are finished with a canvas header and brass grommets and are offered in four sizes: 2ft. x 3ft., 3ft. x 5ft., 4ft. x 6ft., and 5ft. x 8ft., to fit any sized flagpole. Typically, outdoor flags are flown outside of government organizations, businesses, and institutions on in-ground and wall-mount flagpoles, however, some people also buy these flags to display their international pride at home. If you are looking for a wall-mount Suriname flag set to display outside of your home, our Build Your Own Outdoor International Flag Set program will allow you to choose between premium quality 6ft. poles and brackets to display the Suriname Flag on your front porch. Outdoor flags can also be displayed indoors on interior walls of your home with screws anchored in the wall to attach to the grommets.

In addition to the flags we offer for purchase, we maintain an archive of historical information about the Suriname flag, demographic data about Suriname, and free high resolution images of the Suriname flag for use in projects and on websites. 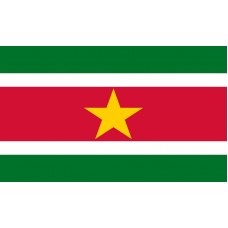 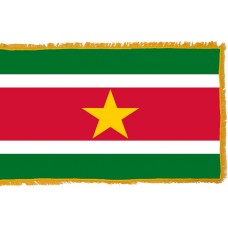 History of the Suriname Flag

Suriname is a country in South America and is the smallest country. It shares borders with French Guiana, Guyana, and Brazil. The capital city and home to half of the country's population is called Paramaribo. The historic inner city of Paramaribo is considered to be one of the most culturally interesting areas in South America due to its many buildings and monuments that date back to the colonial period and for the unique Dutch architecture. The earliest inhabitants of Suriname were called the Surinen Indians, which is where the country’s name is derived from. Approximately 80% of Suriname consists of rainforest.

In 1498, Suriname was first sighted by Christopher Columbus and in 1593, Suriname was claimed by Spain. By 1602, Dutch and English explorers began to settle the land and following a feud between them, the British gave the land to the Dutch in 1667 in exchange for New Amsterdam. Suriname became a Dutch colony and was known as Dutch Guiana. During the Dutch rule, the economy was reliant on the sugar plantations and the African slaves. The people of Suriname that managed to escape slavery are referred to as the ‘Maroons’ and they created their own tribal groups in the jungles. Despite the abolishment of slavery in 1863, various tribal groups still exist that are known as, Ndyuka, Saramaka, Paramaka, Kwinti, Aluku, and Matawai. Suriname is the only country in South America that still has Dutch as an official language.

Today, the economy in Suriname is heavily reliant on the mining, processing and export of bauxite which is an aluminum ore and it is exported to many major countries. The export of banana, shrimp, and rice is also very important to the economy. Suriname is not a very big tourist destination despite the beautiful sites that it is home to. The two major destinations, that are also listed on the World Heritage Sites are the historic inner city of the capital Paramaribo and the Central Suriname Nature Reserve.

We offer free images of the Suriname Flag in four sizes (small, medium, large, and high resolution). These images are distributed royalty free for both personal and educational use and are ideal for use in projects and on websites. If you choose to use one of our images, attribution is appreciated, but not required.

The following html code snippets can be copied and pasted to add an image of the Suriname Flag to your website: