We carry authentic Thailand Flags in both indoor and outdoor varieties. Our flags are proudly made in the United States from durable nylon and are printed with vibrant long-lasting inks. The Thailand national flag is often displayed at embassies, outside of businesses associated with Thailand, and at the homes of people who take great pride in their Thai heritage.

Our indoor flags are finished with a pole hem and your choice of with or without golden fringe. Gold fringe is the traditional way to display an indoor flag, however, some people choose without fringe for a simple and clean look that is also less expensive. If you are looking for a complete indoor presentation set, our Build Your Own Indoor International Flag Set program allows you to select a durable nylon indoor Thailand Flag and choose between premium quality poles, bases, and ornaments, and tassel. For indoor applications, most buyers choose a 3ft. x 5ft. flag with an 8ft. pole, however, if you have a low ceiling, you may opt for a 7ft. pole, which is designed to work with drop ceilings. If you are looking for a very substantial international flag display, our 4ft. x 6ft. indoor flags can be paired with a 9ft. pole for our largest indoor display option.

Our outdoor international flags are finished with a canvas header and brass grommets and are offered in four sizes: 2ft. x 3ft., 3ft. x 5ft., 4ft. x 6ft., and 5ft. x 8ft., to fit any sized flagpole. Typically, outdoor flags are flown outside of government organizations, businesses, and institutions on in-ground and wall-mount flagpoles, however, some people also buy these flags to display their international pride at home. If you are looking for a wall-mount Thailand flag set to display outside of your home, our Build Your Own Outdoor International Flag Set program will allow you to choose between premium quality 6ft. poles and brackets to display the Thailand Flag on your front porch. Outdoor flags can also be displayed indoors on interior walls of your home with screws anchored in the wall to attach to the grommets. 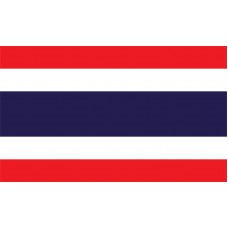 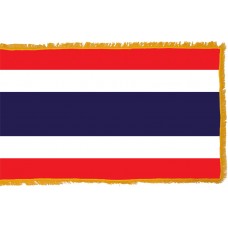 History of the Thailand Flag

The Thailand flag features five horizontal bands in the colors of red, white, blue, white, and red. The blue stripe that is in the middle of the flag, is double the width of the other stripes. The red color represents the people and the country and the blood that was shed to protect the country. The blue color represents the Thai monarchy as well as being the national color of Thailand, and the white color represents The Buddhist religion, which is the primary religion in Thailand. The red, blue, and white colors are used on the Thailand flag to honor their WWI allies, which were Great Britain, France, USA, and Russia, who all use the red, white, and blue colors on their flag. The flag represents "nation-religion-king" which is the unofficial motto of the country. The Thailand flag is also referred to as the "Triaranga" or "Triarong" which means "tricolor" and was adopted on September 28th, 1917, which makes it one of the world's oldest flags.

Thailand is a country that is located in Southeast Asia that shares borders with Laos, Cambodia, Mynamar, and Malaysia. The largest and capital city of Thailand is called Bangkok. Thailand is also known as "Prathet Thai" which literally translates as "land of the free" and is home to 1430 islands. Thailand was originally known as "Siam" until its name changed in 1939 and it is the only country in Southeast Asia that has never been colonized by the British.

Thailand is the largest producer of tin and the second largest producer of rice and a lot of the economy is based around this as well as tourism. It is home to approximately 6,000,000 tourists a year. Bangkok is considered to be the world's most visited city and was originally known as the "Venice of the East" due to the number of canals that it used to have. As the city has expanded, however, and got more populated (the majority of the Thailand's population now live here), new roads and streets and buildings saw the removal of the canals. The number one attraction of Thailand is in Bangkok and is the "Grand Palace" which has been the residence of the Kings of Siam from 1782-1925. It is made up of numerous buildings, gardens and courtyards. The largest gold buddha (which is known as "Phra Phuttha Maha Suwana Patimakon" and weighs 5.5 tons) is located in Bangkok in the temple of "Wat Traimit."

Nobody knew that the Buddha was made of gold or its worth for approximately 200 years, as it was covered with stucco and colored glass to conceal the gold. Thailand is home to approximately 35,000 temples and has the largest crocodile farm in the world, the longest suspension bridge, the tallest hotel, and the largest restaurant in the world. It is also known to be the prostitution capital of the world.

Thailand unites flesh and blood of Thais.
Nation of the people; belonging to the Thais in every respect.
Long maintained [has been] the independence
Because the Thais seek, and love, unity.
Thais are peace-loving;
But at war we're no cowards.
Sovereignty will not be threatened
Sacrificing every drop of blood for the nation
Hail the nation of Thailand, long last the victory, Chai Yo (Cheers).

We offer free images of the Thailand Flag in four sizes (small, medium, large, and high resolution). These images are distributed royalty free for both personal and educational use and are ideal for use in projects and on websites. If you choose to use one of our images, attribution is appreciated, but not required.

The following html code snippets can be copied and pasted to add an image of the Thailand Flag to your website: