We carry authentic Cape Verde Flags in both indoor and outdoor varieties. Our flags are proudly made in the United States from durable nylon and are printed with vibrant long-lasting inks. The Cape Verde national flag is often displayed at embassies, outside of businesses associated with Cape Verde, and at the homes of people who take great pride in their Cape Verde heritage.

Our indoor flags are finished with a pole hem and your choice of with or without golden fringe. Gold fringe is the traditional way to display an indoor flag, however, some people choose without fringe for a simple and clean look that is also less expensive. If you are looking for a complete indoor presentation set, our Build Your Own Indoor International Flag Set program allows you to select a durable nylon indoor Cape Verde Flag and choose between premium quality poles, bases, and ornaments, and tassel. For indoor applications, most buyers choose a 3ft. x 5ft. flag with an 8ft. pole, however, if you have a low ceiling, you may opt for a 7ft. pole, which is designed to work with drop ceilings. If you are looking for a very substantial international flag display, our 4ft. x 6ft. indoor flags can be paired with a 9ft. pole for our largest indoor display option.

Our outdoor international flags are finished with a canvas header and brass grommets and are offered in four sizes: 2ft. x 3ft., 3ft. x 5ft., 4ft. x 6ft., and 5ft. x 8ft., to fit any sized flagpole. Typically, outdoor flags are flown outside of government organizations, businesses, and institutions on in-ground and wall-mount flagpoles, however, some people also buy these flags to display their international pride at home. If you are looking for a wall-mount Cape Verde flag set to display outside of your home, our Build Your Own Outdoor International Flag Set program will allow you to choose between premium quality 6ft. poles and brackets to display the Cape Verde Flag on your front porch. Outdoor flags can also be displayed indoors on interior walls of your home with screws anchored in the wall to attach to the grommets. 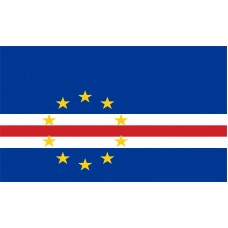 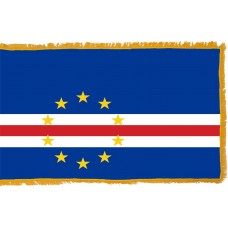 History of the Cape Verde Flag

The Cape Verde flag is dark blue and features three thin strips of white, red, and white. A circle of ten yellow stars that overlaps the three strips. The dark blue color symbolizes the ocean and the sky. The white and red strips pay tribute to the country's development and formation, with the white color symbolizing peace and the red color symbolizing the effort made. The ten stars are symbolic of the ten islands within the country and the shape of the circle represents the unity of these ten islands. The Cape Verde flag was made official on September 22nd, 1992, replacing the original national flag adopted after they gained independence from Portugal on July 5th, 1975 which used the African colors of red, yellow, and green.

Cape Verde is an island country in West Africa, in the Central Atlantic, that is comprised of ten islands (9 of which are inhabited). The islands that comprise the country are: Santo Antao, Sao Vicente, Santa Luzia, Sao Nicolau, Sal, Boa Vista, Maio, Santiago, Fogo, and Brava. Cape Verde is the smallest island country in Africa. The largest island is Santiago and is home to the capital city, Praia. The only uninhabited island is Saint Luzia. The islands are divided into two sections; The first section is known as the "Barlavento" group, which are the group of windward islands and the second section is the "Sotavento" group, which are the group of leeward islands.

Cape Verde is home to some of the most beautiful beaches in the world and is gaining popularity with tourists each year. The most popular destination visited by tourists is Santa Maria, located on the island of Sal. Sal is the most developed island in the country, home to some of the most beautiful beaches of Cape Verde, and is a very popular wind-surfing destination. The island of Santa Antao is also popular, especially for hikers as it is home to many valleys, gorges and canyons. Many visitors are also attracted to Cape Verde to experience the diving, shipwrecks, and sharks in the oceans that surround the islands.

Sing, brother
Sing, my brother
For Freedom is a hymn
And Man a certainty

With dignity, bury the seed
In the dust of the naked island
In life's precipice
Hope is as big as the sea
Which embraces us
Sentinel of the seas and winds
Unwavering
between stars
and the Atlantic
sing the Chant of Freedom

Sing, brother
sing, my brother
for Freedom is a hymn
and Man a certainty.

We offer free images of the Cape Verde Flag in four sizes (small, medium, large, and high resolution). These images are distributed royalty free for both personal and educational use and are ideal for use in projects and on websites. If you choose to use one of our images, attribution is appreciated, but not required.

The following html code snippets can be copied and pasted to add an image of the Cape Verde Flag to your website: