We carry authentic Andorra Flags in both indoor and outdoor varieties. Our flags are proudly made in the United States from durable nylon and are printed with vibrant long-lasting inks. The Andorra national flag is often displayed at embassies, outside of businesses associated with Andorra, and at the homes of people who take great pride in their Andorra heritage.

Our indoor flags are finished with a pole hem and your choice of with or without golden fringe. Gold fringe is the traditional way to display an indoor flag, however, some people choose without fringe for a simple and clean look that is also less expensive. If you are looking for a complete indoor presentation set, our Build Your Own Indoor International Flag Set program allows you to select a durable nylon indoor Andorra Flag and choose between premium quality poles, bases, and ornaments, and tassel. For indoor applications, most buyers choose a 3ft. x 5ft. flag with an 8ft. pole, however, if you have a low ceiling, you may opt for a 7ft. pole, which is designed to work with drop ceilings. If you are looking for a very substantial international flag display, our 4ft. x 6ft. indoor flags can be paired with a 9ft. pole for our largest indoor display option.

Our outdoor international flags are finished with a canvas header and brass grommets and are offered in four sizes: 2ft. x 3ft., 3ft. x 5ft., 4ft. x 6ft., and 5ft. x 8ft., to fit any sized flagpole. Typically, outdoor flags are flown outside of government organizations, businesses, and institutions on in-ground and wall-mount flagpoles, however, some people also buy these flags to display their international pride at home. If you are looking for a wall-mount Andorra flag set to display outside of your home, our Build Your Own Outdoor International Flag Set program will allow you to choose between premium quality 6ft. poles and brackets to display the Andorra Flag on your front porch. Outdoor flags can also be displayed indoors on interior walls of your home with screws anchored in the wall to attach to the grommets.

In addition to the flags we offer for purchase, we maintain an archive of historical information about the Andorra flag, demographic data about Andorra, and free high resolution images of the Andorra flag for use in projects and on websites. 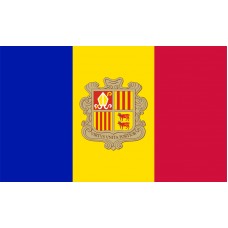 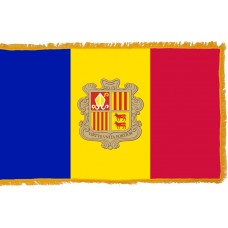 History of the Andorran Flag

Andorra is historically linked to France, Spain, Catalonia, and Foix. It's history with these nations dates back to its supposed beginnings. Andorra's historical documents suggest that they are the last independent survivor of the Marca Hispanica which were the "buffer states" created by Charlemagne to keep Islamic Moors from reaching and advancing into Christian France. It is believed that the Andoor's were given charter as payment for their help in fighting the Moors. The grandson of Charlemagne gave the title of Overlord of Andorra to the Count of Urgell in the 9th Century. The lands were later given to the Diocese of Urgell a few generations later by one of the descendants of the Count.

Under the threat of military attack, the Bishop of Urgell was protected by the lord of cabinet who was a Catalan Nobleman. The Count of Foix became the heir to the Lord of Cabinet by marriage, however, the question as to who was the true heir of Andorra became a source a dispute between the Occitan Count and the Catalan Bishop. In 1278, they came to an agreement to split the areas they would rule and to share in the progression of the people and country together. The Andorran's pay a tribute annually to the Queseida which is the co-rulers who were able to recognize the others equal principle rights and rule as one together. Each year, Andorra pays homage to the leaders by giving them four hams, forty loaves of bread and a number of bottles of wine. The fact that Andorra's borders have not changed since 1278 is a testament to this unity.

The blue and red colors featured on the flag pay homage to France's colors and the yellow and red signify the countries connection to Spain, Catalonia, and Foix. The wider yellow stripe in the middle is similar to that on the Catalan flag and on the arms of the old county foix (which is now part of France). The Andorra Coat of Arms features the motto, "Virtus Unita Fortior," which translates to: "Virtue United is Stronger."

The Andorran flag is very similar to those of Romania, Moldova and Chad, except, their flags all have equally-sized tricolor designs, whereas the the larger stripe in the middle of the Andorran flag distinguishes this flag as unique.

Andorra is a small country with no coast. L, locked between Spain and France and is predominantly comprised of rugged mountains and valleys. Its area spans 180 square miles and its seasons are slightly cooler than its neighbors.

We offer free images of the Andorra Flag in four sizes (small, medium, large, and high resolution). These images are distributed royalty free for both personal and educational use and are ideal for use in projects and on websites. If you choose to use one of our images, attribution is appreciated, but not required.

The following html code snippets can be copied and pasted to add an image of the Andorra Flag to your website: