We carry authentic Laos Flags in both indoor and outdoor varieties. Our flags are proudly made in the United States from durable nylon and are printed with vibrant long-lasting inks. The Laos national flag is often displayed at embassies, outside of businesses associated with Laos, and at the homes of people who take great pride in their Laos heritage.

Our indoor flags are finished with a pole hem and your choice of with or without golden fringe. Gold fringe is the traditional way to display an indoor flag, however, some people choose without fringe for a simple and clean look that is also less expensive. If you are looking for a complete indoor presentation set, our Build Your Own Indoor International Flag Set program allows you to select a durable nylon indoor Laos Flag and choose between premium quality poles, bases, and ornaments, and tassel. For indoor applications, most buyers choose a 3ft. x 5ft. flag with an 8ft. pole, however, if you have a low ceiling, you may opt for a 7ft. pole, which is designed to work with drop ceilings. If you are looking for a very substantial international flag display, our 4ft. x 6ft. indoor flags can be paired with a 9ft. pole for our largest indoor display option.

Our outdoor international flags are finished with a canvas header and brass grommets and are offered in four sizes: 2ft. x 3ft., 3ft. x 5ft., 4ft. x 6ft., and 5ft. x 8ft., to fit any sized flagpole. Typically, outdoor flags are flown outside of government organizations, businesses, and institutions on in-ground and wall-mount flagpoles, however, some people also buy these flags to display their international pride at home. If you are looking for a wall-mount Laos flag set to display outside of your home, our Build Your Own Outdoor International Flag Set program will allow you to choose between premium quality 6ft. poles and brackets to display the Laos Flag on your front porch. Outdoor flags can also be displayed indoors on interior walls of your home with screws anchored in the wall to attach to the grommets.

In addition to the flags we offer for purchase, we maintain an archive of the audio and lyrics of the Laos National Anthem, historical information about the Laos flag, demographic data about Laos, and free high resolution images of the Laos flag for use in projects and on websites. 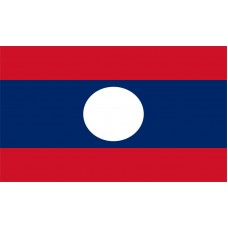 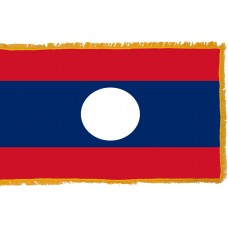 History of the Laos Flag

The Laos flag consists of three horizontal blocks in the colors of red, blue, and red. The blue block is double the size of the two red blocks. In the middle of the blue block is a white circle. The red blocks of color represent the battle and blood lost in the country's fight for independence from the French, the blue color represents wealth, and the white circle represents the union of the Lao People as well as the full moon against the Mekong River. The Laos flag was adopted on December 2nd, 1975, but was actually designed in 1945 by Mahasila Viravong.

Laos is a landlocked country in Southeast Asia that shares borders with Myanmar, China Vietnam, Cambodia, and Thailand. Laos's name used to be "Lan Xang" which translates as "Kingdom of A Million Elephants." The capital of Laos is called "Vientiane." The majority of the country is covered by mountains or forests and it is considered one of the poorest countries as a lot of the country and the homes do not even have electricity or running water. A lot of the forests that surround the country are being destroyed or burnt to create room for agriculture.

History in Laos is thought to date back 10,000 years. Between 1353-1371, King Fa Ngoum invaded and conquered Laos. In 1560, King Setthathirath ruled the country and in the 17th Century (also considered Laos "Golden Age"), King Souliyavongsa ruled. Following King Souliyavongsa's rule, the country became divided into 3 Kingdoms, which were: Luang Prabang, Vientiane, and Champassack. The fact that the country was divided made it the ultimate target for invasion and during the 18th Century, following invasion, Laos was under Siamese domination.

In 1893, Laos became part of the French colony until it declared independence in 1950. It was still not considered independent by France and was officially declared independent in 1975 following a civil war that also coincided with the Vietnamese War. Despite being independent from France, the capital, Vientiane still has a lot of French influence in the architecture, wide boulevards, and some French legacies.

Laos is home to many beautiful attractions and despite being a landlocked country, there are plenty of beaches in "Si Phan Don" which translates as "4,000 islands" and is located in Southern Laos. Another attraction is the "Nong Fa Lake" (translates as "blue lake") which is located in the mountains in Southeast Laos. The natives refuse to swim in this lake (even though tourists do) because according to legend, a man-eating monster lives at the bottom of the lake and it is still very feared today. The most popular attractions are located in Luang Prabang (formerly the capital of the Kingdom of Laos until 1975). This old city features old temples, palaces, and museums that explain some of the country’s history.

For all time the Lao people have glorified their Fatherland,
United in heart, spirit and vigour as one.
Resolutely moving forwards,
Respecting and increasing the dignity of the Lao people
And proclaiming the right to be their own masters.
The Lao people of all origins are equal
And will no longer allow imperialists and traitors to harm them.
The entire people will safeguard the independence
And the freedom of the Lao nation.
They are resolved to struggle for victory
In order to lead the nation to prosperity.

We offer free images of the Laos Flag in four sizes (small, medium, large, and high resolution). These images are distributed royalty free for both personal and educational use and are ideal for use in projects and on websites. If you choose to use one of our images, attribution is appreciated, but not required.

The following html code snippets can be copied and pasted to add an image of the Laos Flag to your website: