We carry authentic Cambodia Flags in both indoor and outdoor varieties. Our flags are proudly made in the United States from durable nylon and are printed with vibrant long-lasting inks. The Cambodia national flag is often displayed at embassies, outside of businesses associated with Cambodia, and at the homes of people who take great pride in their Cambodian heritage.

Our indoor flags are finished with a pole hem and your choice of with or without golden fringe. Gold fringe is the traditional way to display an indoor flag, however, some people choose without fringe for a simple and clean look that is also less expensive. If you are looking for a complete indoor presentation set, our Build Your Own Indoor International Flag Set program allows you to select a durable nylon indoor Cambodia Flag and choose between premium quality poles, bases, and ornaments, and tassel. For indoor applications, most buyers choose a 3ft. x 5ft. flag with an 8ft. pole, however, if you have a low ceiling, you may opt for a 7ft. pole, which is designed to work with drop ceilings. If you are looking for a very substantial international flag display, our 4ft. x 6ft. indoor flags can be paired with a 9ft. pole for our largest indoor display option.

Our outdoor international flags are finished with a canvas header and brass grommets and are offered in four sizes: 2ft. x 3ft., 3ft. x 5ft., 4ft. x 6ft., and 5ft. x 8ft., to fit any sized flagpole. Typically, outdoor flags are flown outside of government organizations, businesses, and institutions on in-ground and wall-mount flagpoles, however, some people also buy these flags to display their international pride at home. If you are looking for a wall-mount Cambodia flag set to display outside of your home, our Build Your Own Outdoor International Flag Set program will allow you to choose between premium quality 6ft. poles and brackets to display the Cambodia Flag on your front porch. Outdoor flags can also be displayed indoors on interior walls of your home with screws anchored in the wall to attach to the grommets.

In addition to the flags we offer for purchase, we maintain an archive of historical information about the Cambodia flag, demographic data about Cambodia, and free high resolution images of the Cambodia flag for use in projects and on websites. 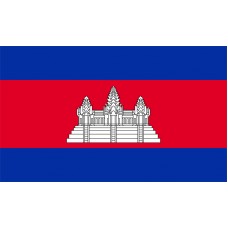 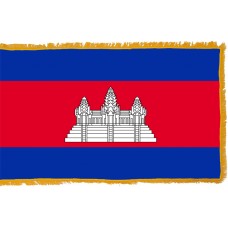 History of the Cambodian Flag

The Cambodia Flag is comprised of 3 horizontal bands in the colors blue, red, and blue. The middle red band is double the width of the two outer blue bands. In the middle of the flag, the Angkor Wat building is emblazoned in white. The red color represents the bravery of the people of Cambodia and the blue color symbolizes liberty and freedom as well as the King of Cambodia. The building featured on the flag is the world's largest religious temple and a point of pride for the people of Cambodia and followers of the Buddhist religion in general. The Angkor Wat building has been incorporated into the flag since 1850 and the color white used to depict it signifies love and justice. The Cambodian flag is one of only two flags that feature an image of a building (Afghanistan is the other.)

Cambodia has suffered many bloody wars and battles throughout the country's history. Through all of this conflict, the country has used a total of ten different flags since the 19th Century. When the current flag was first adopted in 1948, Cambodia was still a French Protectorate, however, after forming a new independent nation in 1953, the country continued to use the same flag design.

After gaining independence from France, between the years of 1953-1970, Cambodia was a monarchy ruled by King Norodom Sihanouk. In 1970, after the removal of the King, Cambodia became a Republic (Khmer Republic). During this period, the flag was changed to a blue background, with a red square in the left corner with the image of the Angkor Wat and three white horizontal stars next to it. In 1975, the Khmer Republic was overthrown by the Khmer Rouge when they entered the capital city Phnom Penh and gained control. As a result, the official name of the country was changed again to "Democratic Kampuchea." When the name of the country changed, the flag also changed again and the color red was used with a yellow Angkor Wat in the middle.

The Khmer Rouge had control of the country from 1975-1979; Their rule is known as the most violent in the countrys history. It was during these years that the Cambodia genocide was carried out, where between 2,000,000–3,000,000 people lost their lives. The reign of the Khmer Rouge came to an end when the Vietnamese invaded and took control in 1979 and the new "People's Republic of Kampuchea," was established. In September 1993, the monarchy in the country was finally restored and the flag that was adopted in 1948 was re-adopted and is still used today.

Cambodia is a Sovereign State located in South Eastern Asia and shares borders with Thailand, Laos, Vietnam and the Gulf of Thailand. Cambodia is home to rich history and culture and has become a very popular tourist destination, mainly due to people visiting the Angkor Wat temple.

Multiparty democracy under a constitutional monarchy

We offer free images of the Cambodia Flag in four sizes (small, medium, large, and high resolution). These images are distributed royalty free for both personal and educational use and are ideal for use in projects and on websites. If you choose to use one of our images, attribution is appreciated, but not required.

The following html code snippets can be copied and pasted to add an image of the Cambodia Flag to your website: