We carry authentic Djibouti Flags in both indoor and outdoor varieties. Our flags are proudly made in the United States from durable nylon and are printed with vibrant long-lasting inks. The Djibouti national flag is often displayed at embassies, outside of businesses associated with Djibouti, and at the homes of people who take great pride in their Djibouti heritage.

Our indoor flags are finished with a pole hem and your choice of with or without golden fringe. Gold fringe is the traditional way to display an indoor flag, however, some people choose without fringe for a simple and clean look that is also less expensive. If you are looking for a complete indoor presentation set, our Build Your Own Indoor International Flag Set program allows you to select a durable nylon indoor Djibouti Flag and choose between premium quality poles, bases, and ornaments, and tassel. For indoor applications, most buyers choose a 3ft. x 5ft. flag with an 8ft. pole, however, if you have a low ceiling, you may opt for a 7ft. pole, which is designed to work with drop ceilings. If you are looking for a very substantial international flag display, our 4ft. x 6ft. indoor flags can be paired with a 9ft. pole for our largest indoor display option.

Our outdoor international flags are finished with a canvas header and brass grommets and are offered in four sizes: 2ft. x 3ft., 3ft. x 5ft., 4ft. x 6ft., and 5ft. x 8ft., to fit any sized flagpole. Typically, outdoor flags are flown outside of government organizations, businesses, and institutions on in-ground and wall-mount flagpoles, however, some people also buy these flags to display their international pride at home. If you are looking for a wall-mount Djibouti flag set to display outside of your home, our Build Your Own Outdoor International Flag Set program will allow you to choose between premium quality 6ft. poles and brackets to display the Djibouti Flag on your front porch. Outdoor flags can also be displayed indoors on interior walls of your home with screws anchored in the wall to attach to the grommets. 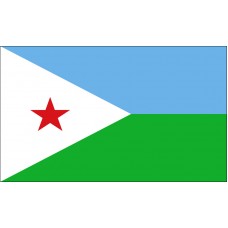 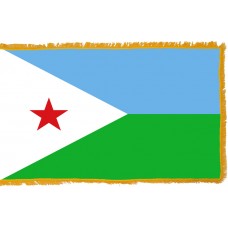 History of the Djibouti Flag

The Djibouti flag features two equally-sized bands of color that run horizontally; blue at the top and green at the bottom. On the hoist side is a white isosceles triangle. In the center of the flag, within the white triangle is a red star which symbolizes blood and unity. The green band of color represents the everlasting green of the earth, the light blue band of color, the sky and the sea, and the white of the triangle symbolizes peace. The blue color also represents the Somali people, and blue the Afar. These two groups make up the vast majority of the Djiboutian population. Together with the white color of peace, the Djibouti flag is a symbol of the strides the country has made to forge a stable, peaceful nation.

As with most African countries, Djibouti has a colonial past which forms a large part of its identity. The red star on the hoist side of the flag is a reminder of the struggle to gain independence. Djibouti was a French colony until 1977, and the French language is still widely spoken in the country. Djibouti is situated on the Horn of Africa, a part of the continent which is very close to the Arabian Peninsula. At its narrowest point, Djibouti is only about 30km away from Yemen. In fact, there are plans to build a bridge between the two countries, which would join Africa and Asia.

Djibouti is part of the French Somaliland. The country developed rapidly around the railroad between the port city of Djibouti and Addis Ababa in Ethiopia. Thcountry is an important location as a point of contact between Africa and Arabia. For centuries, Djibouti was ruled by Sultans, an Arab term meaning sovereign. It was originally part of the Land of Punt, mentioned in ancient Egyptian hieroglyphic texts.

The Red Sea borders at its north eastern boundary. The countries sits between the sea and eight mountain ranges, which are part of the Great Rift Valley. Although on the continent of Africa, Djibouti is actually situated on the Arabian Plate, part of the earth's tectonic structure. This physical connection is one of many connections with Arabia which continue to be important in the country.

As well as mountainous areas, Djibouti is largely covered by desert. It is a very hot, dry country throughout the year, especially in the eastern part of the country. This area is low lying and subject to harsh sunlight almost constantly. Temperatures in the summer can reach above 40 degrees Celsius.

Djibouti has a massive service sector, fueled by its position as a hub for strategic worldwide business and political operations. Although the country has a rich cultural history and beautiful scenery, it has not yet emerged as a popular tourist destination.

Arise with strength! For we have raised our flag,
The flag which has cost us dear
With extremes of thirst and pain.
Our flag, whose colours are the everlasting green of the earth,
The blue of the sky, and white, the colour of peace;
And in the centre the red star of blood.
Oh flag of ours, what a glorious sight!

We offer free images of the Djibouti Flag in four sizes (small, medium, large, and high resolution). These images are distributed royalty free for both personal and educational use and are ideal for use in projects and on websites. If you choose to use one of our images, attribution is appreciated, but not required.

The following html code snippets can be copied and pasted to add an image of the Djibouti Flag to your website: