We carry authentic Pakistan Flags in both indoor and outdoor varieties. Our flags are proudly made in the United States from durable nylon and are printed with vibrant long-lasting inks. The Pakistan national flag is often displayed at embassies, outside of businesses associated with Pakistan, and at the homes of people who take great pride in their Pakistani heritage.

Our indoor flags are finished with a pole hem and your choice of with or without golden fringe. Gold fringe is the traditional way to display an indoor flag, however, some people choose without fringe for a simple and clean look that is also less expensive. If you are looking for a complete indoor presentation set, our Build Your Own Indoor International Flag Set program allows you to select a durable nylon indoor Pakistan Flag and choose between premium quality poles, bases, and ornaments, and tassel. For indoor applications, most buyers choose a 3ft. x 5ft. flag with an 8ft. pole, however, if you have a low ceiling, you may opt for a 7ft. pole, which is designed to work with drop ceilings. If you are looking for a very substantial international flag display, our 4ft. x 6ft. indoor flags can be paired with a 9ft. pole for our largest indoor display option.

Our outdoor international flags are finished with a canvas header and brass grommets and are offered in four sizes: 2ft. x 3ft., 3ft. x 5ft., 4ft. x 6ft., and 5ft. x 8ft., to fit any sized flagpole. Typically, outdoor flags are flown outside of government organizations, businesses, and institutions on in-ground and wall-mount flagpoles, however, some people also buy these flags to display their international pride at home. If you are looking for a wall-mount Pakistan flag set to display outside of your home, our Build Your Own Outdoor International Flag Set program will allow you to choose between premium quality 6ft. poles and brackets to display the Pakistan Flag on your front porch. Outdoor flags can also be displayed indoors on interior walls of your home with screws anchored in the wall to attach to the grommets. 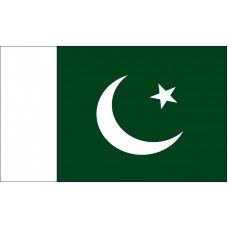 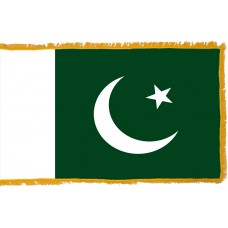 History of the Pakistan Flag

The Pakistan Flag consists of a green field with a white crescent moon and a five-pointed star in the middle of it. On the left side of the flag, is a vertical white band that meets the edges. The green color represents Islam and is thought to be the favorite color of the Prophet Muhammed and the white color represents the religious minorities. The crescent and the star represent the progress and the light and knowledge. The Pakistan flag was adopted on August 11th, 1947, which was four days before their independence was declared and it was designed by Amiruddin Kidwai. The Pakistan flag, as a whole, is symbolic of Pakistan's devotion and commitment to Islam.

Pakistan (which is officially known as "Islamic Republic of Pakistan") literally translates as "land of the pure." It is a country in Southern Asia that shares borders with Afghanistan, China, India, and Iran and the capital city is called Islamabad. The largest city in Pakistan is called Karachi (which also used to be the capital) and is home to approximately 13,000,000 people. Throughout history, Pakistan has been home to many empires and civilizations, and it is thought that one of the oldest civilizations in the world was in Ancient Pakistan 9000 years ago – the Indus Valley Civilization. During the 16th – 17th centuries, the Mogul Empire ruled the majority of South Asia, but in the 18th century, the British came to the area and dominated the area of Pakistan and part of India. In the 19th century, India was mainly ruled by the East India Company which was a British trading organization, and in 1857, the Indian army started a battle which was known as the "Indian Rebellion of 1857," opposing the East India Company.

During the battle, the British parliament became involved, and as a result, India were defeated, and the British Parliament took over and ruled the country. In 1858, the British Raj was established and ruled for almost 100 years. In WWII, the Indian army fought with the British army on the condition that Britain would grant them independence.

India was granted independence, and, at the same time, due to all the religious conflicts between the Hindus and the Muslims, India was divided into two separate countries: Pakistan (for the Muslim majority) and India (for the Hindu majority). There were two ceremonies to celebrate the independence – Pakistan's was celebrated on August 14th, 1947 and India's was celebrated on August 15th, 1947. Independence was declared at midnight by the Prime Minister at the time, Jawaharlal Nehru, who stated "At the stroke of the midnight hour, when the world sleeps, India will awake to life and freedom. A moment comes, which comes but rarely in history, when we step out from the old to the new, when an age ends, and when the soul of a nation, long suppressed, finds utterance."

Blessed be the sacred land
Happy be the bounteous realm
Symbol of high resolve
Land of Pakistan!
Blessed be thou, citadel of faith

The order of this sacred land
Is the might of the brotherhood of the people
May the nation, the country, and the state
Shine in glory everlasting!
Blessed be the goal of our ambition

This flag of the crescent and star
Leads the way to progress and perfection
Interpreter of our past, glory of our present
Inspiration of our future!
Symbol of the protection of God, Owner of Majesty

We offer free images of the Pakistan Flag in four sizes (small, medium, large, and high resolution). These images are distributed royalty free for both personal and educational use and are ideal for use in projects and on websites. If you choose to use one of our images, attribution is appreciated, but not required.

The following html code snippets can be copied and pasted to add an image of the Pakistan Flag to your website: